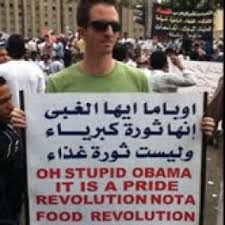 Ilan Grapel, an American-Zionist who entered Egypt using his American passport, has met with American consular officer in Cairo and spoken with his mother; Egyptian news agency claims Grapel in Egypt to ‘incite’ protests.

Ilan Grapel, the Jewish American citizen reportedly detained in Egypt under suspicion of espionage for Israel, entered Egypt using a forged permit, according to a report issued on Monday by the Egyptian online news agency “The Seventh Day”.

Grapel entered Egypt as a foreign writer for an American newspaper, meeting with a group of foreign reporters he kept in touch with throughout his stay in Egypt, the report said.

The Egyptian authorities announced on Sunday that they had arrested a suspected spy for Israel. Egyptian media published Grapel’s name and identity on Monday.

A former paratrooper in the Israel Defense Forces with dual American-Israeli citizenship, Grapel reportedly travelled to several parts of Egypt, and was given the task of gauging the public’s reaction to the policies of the Egyptian high military council.

The Egyptian news report published on Monday claimed that Grapel made sure to be present in areas in which there were clashes between Christians and Muslims in an effort to incite demonstrators.

While in Egypt, Grapel planned to travel throughout the country, according to the Egyptian report, including northern Sinai and Al-Arish to follow the developments happening with the gas pipeline that has supplied much of Israel’s oil, as well as with the recent opening of the Rafah border with Gaza.

The Seventh Day has posted a few photographs of Grapel, apparently from his own personal camera, in which he is seen in IDF uniform. In the other photographs he is pictured carrying a banner in Tahrir Square, the heart of the Egyptian protest movement that toppled Hosni Mubarak, as well as snapped visiting a mosque and the pyramids.

The U.S. State Department issued a statement on Sunday reacting to Grapel’s detention, saying that the U.S. Embassy in Cairo “is providing Ilan Grapel, an arrested U.S. citizen, with the same assistance it provides to all U.S. citizens arrested overseas.”

The statement said that consular officers have already visited him and the embassy will be in contact with local Egyptian authorities to ensure that he is “being treated fairly under local law”. Grapel will be provided with information about the legal system, and will be allowed communication with family and friends in the U.S.

Grapel met with an American consular officer in Cairo on Monday to check on him and put him in touch with family members in the United States.

The Foreign Ministry said that Grapel entered Egypt using his American passport, and therefore Egyptian authorities initially contacted the American Embassy in Cairo and not the Israeli Embassy.

“An American consular officer has visited him [Grapel] and he is under the care of the American Embassy in Cairo,” the Foreign Ministry said in a statement Monday.

The U.S. State Department has said that they have been in contact with Grapel’s family, all of whom live in the United States. While the consular officer was visiting with Grapel, he called the detained former paratrooper’s mother so that she could speak with her son.

Therefore, the ministry will not be getting directly involved in the case and will receive updates from the U.S. Embassy and the State Department.

Friends of Grapel’s believe that the American citizen is innocent, and the allegations against him do not fit with the kind of person he is. “It doesn’t fit,” a friend of Ilan’s who asked to be identified as Shmuel told Haaretz.

“Ilan was always concerned with human rights, was for the establishment of a Palestinian state and was learning about Arab culture,” Shmuel said.

“Everyone knows he was very left-wing,” he added, “him being a spy is very far-fetched.”

According to an Egyptian authorities’ statement, released to the press Sunday afternoon, Grapel was arrested in a hotel in central Cairo. It said the intelligence services have been conducting a clandestine investigation and passed their findings to the attorney general’s office.

The authorities went on to claim that Grapel had a number of assignments in Egypt, including collecting intelligence during the revolution.

The authorities claim that Grapel attended the major protests and incited demonstrators to violence, in order to provoke a confrontation with the Egyptian military “and spread chaos in the Egyptian public and harm the state’s political, economic and social interests.” They also stated that Grapel was a soldier in the Lebanon war and was wounded in battle.

The attorney’s general’s office ordered Grapel’s arrest for 15 days in order to continue investigating him. Once the investigation is complete, its details are expected to be made public.