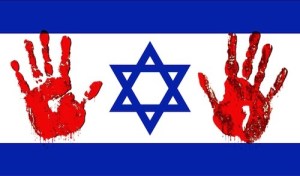 DALET: another dirty word in the conspiracy to steal the land of Palestine

By Stuart Littlewood
I have to admit, I was only dimly aware of the Dalet Planbefore reading Alan Hart’s latest article, “The green light for Zionism’s ethnic cleansing of Palestine”.
The Dalet Plan, or Plan D, was the Zionist terror mob’s diabolical blueprint for the violent and blood-spattered takeover of the Palestinian homeland – some call it the Palestinian holocaust – written 65 years ago and based on three earlier schemes drafted between 1945 and 1948. It was drawn up by the Jewish underground militia, the Haganah, at the behest of David Ben-Gurion, then boss of the Jewish Agency.

Plan D was a carefully thought-out, step-by-step plot choreographed in advance of the British mandate government’s withdrawal and the Zionists’ declaration of Israeli statehood. It correctly assumed that the British authorities would no longer be there. Indeed, the British had completed their departure by 15 May 1948.
The Plan’s intention, on the surface, was to gain control of the areas of the Jewish state and defend its borders. But it also aimed to do much more. It included measures to control the areas of Jewish settlements and concentrations located outside Jewish borders and ensure “freedom of military and economic activity” by occupying and controlling important high-ground positions on a number of transport routes.
This would be achieved by, among other things, applying economic pressure on the enemy by besieging some of his cities”, “encirclement of enemy cities” and “blocking the main enemy transportation routes… Roads, bridges, main passes, important crossroads, paths, etc. must be blocked by means of: acts of sabotage, explosions, series of barricades, minefields, as well as by controlling the elevations near roads and taking up positions there.
Jewish forces would occupy the police stations, described as “fortresses”, fifty of which had been built by the British throughout Palestine after the Arab unrest of 1936-39.
The plan discussed “operations against enemy population centres located inside or near our defensive system in order to prevent them from being used as bases by an active armed force”. These operations included:

Destruction of villages (setting fire to, blowing up and planting mines in the debris), especially those population centres which are difficult to control continuously.
Mounting search and control operations according to the following guidelines: encirclement of the village and conducting a search inside it. In the event of resistance, the armed force must be destroyed and the population must be expelled outside the borders of the state.

Villages emptied in this way were then fortified. “Outside the borders of the state” seems a curious thing to say since nobody was saying then where Israel’s borders ran, and nobody is saying now.
If they met no resistance, “garrison troops will enter the village and take up positions in it or in locations which enable complete tactical control”, said the plan.

The officer in command of the unit will confiscate all weapons, wireless devices and motor vehicles in the village. In addition, he will detain all politically suspect individuals… In every region, a [Jewish] person will be appointed to be responsible for arranging the political and administrative affairs of all [Arab] villages and population centres which are occupied within that region.

And here are the chilling guidelines for besieging, occupying and controlling Arab cities…

It is one of the sickest documents in history and shows why so many people question Israel’s legitimacy. Jewish terror gangs committed a massacre at Deir Yassin to set the tone and “soften up” the Arabs for expulsion. More atrocities followed the declaration of Israeli statehood on 14 May 1948. Some 750,000 Palestinians were put to flight as Israel’s forces obliterated hundreds of Arab villages and towns. The village on which Sderot now stands was one such. To this day they have been denied the right to return and received no compensation. Thirty-four massacres are said to have been committed in pursuit of the Jewish nation’s racist and territorial ambitions.

Was Israel ever “legitimate”?

The UN Partition of Palestine in 1947 cannot stand close scrutiny. At that time, UN membership did not include African states, and most Arab and Asian states were still under colonial rule. It was pretty much a white colonialist club. The Palestinians themselves had no representation and they weren’t even consulted.


…15 May marks the dark day in 1948 remembered by Palestinians as the Nakba (the Catastrophe) brought about by the military terror that forced them off their homeland.

The first vote failed to reach the two-thirds majority required. To ensure success in the second vote a good deal of arm-twisting was applied to the smaller countries, but again it fell short. At the third attempt France was persuaded to come “on board” after the US threatened to withdraw desperately needed post-World War II aid, and on 29 November the UN voted to partition Palestine into three parts: a Jewish state on 14,000 sq km with some 558,000 Jews and 405,000 Palestinian Arabs; and an Arab state on 11,500 sq km with about 804,000 Palestinian Arabs and 10,000 Jews. Jerusalem, including major religious sites, was to be internationally administered.
No sooner had Britain packed its bags than Israel declared statehood on 14 May 1948 and immediately began expanding territorial control across all of Palestine to accommodate a new Jewish state expanding on all fronts. The date of 15 May marks the dark day in 1948 remembered by Palestinians as the Nakba (the Catastrophe) brought about by the military terror that forced them off their homeland.

Two of many massacres

Atrocities occurred at Deir Yassin, Lod and Ramle. The massacre at Deir Yassin was carried out by the two Zionist terror groups, the Irgun and the Stern Gang. On an April morning in 1948 (before the Israeli state declaration) 130 of their commandos made a dawn raid on this small Arab town with a population of 750, to the west of Jerusalem. The attack was initially beaten off, and only when a crack unit of the Haganah arrived with mortars were the Arab townsmen overwhelmed. The Irgun and the Stern Gang, smarting from the humiliation of having to summon help, embarked on a “clean-up” in which they systematically murdered and executed at least 100 residents – mostly women, children and old people. The Irgun afterwards exaggerated the number, quoting 254, to frighten other Arab towns and villages.


Deir Yassin signalled the beginning of a deliberate programme by Israel to depopulate Arab towns and villages – destroying churches and mosques – in order to make room for incoming holocaust survivors and other Jews.

The Haganah played down their part in the raid and afterwards said the massacre “disgraced the cause of Jewish fighters and dishonoured Jewish arms and the Jewish flag”.
Deir Yassin signalled the beginning of a deliberate programme by Israel to depopulate Arab towns and villages – destroying churches and mosques – in order to make room for incoming holocaust survivors and other Jews. In any language it was an exercise in ethnic cleansing, the knock-on effects of which have created an estimated 4 million Palestinian refugees today.
In July 1948 Israeli terrorist troops seized Lydda, shot up the town and drove out the population. Donald Neff reported how, as part of the ethnic cleansing, the Israelis massacred 426 men, women and children. Some 176 of them were slaughtered in the town’s main mosque. The remainder were forced to walk into exile in the scalding July heat, leaving a trail of bodies – men, women and children – along the way.
Of all the blood-baths they say this was the biggest.The great hero Moshe Dayan was responsible. Was he ever brought to book? Of course not.
By 1949 the Zionists had seized nearly 80 per cent of Palestine, provoking the resistance backlash that still goes on.
Even if the UN Partition had been legitimate – which many people doubt – the Israeli state’s greedy ambition immediately overran the generous borders gifted to the Zionists. Few, if any, of the Jews imported into Palestine can trace ancestral connection with the Jews who were driven out by the Roman occupation. As Lord Sydenham warned when he opposed the Balfour Declaration, they are an alien population dumped on an Arab country. “What we have done,” he predicted, “by concessions not to the Jewish people but to a Zionist extreme section, is to start a running sore in the East, and no-one can tell how far that sore will extend.”


…as part of the ethnic cleansing, [in Lydda] the Israelis massacred 426 men, women and children. Some 176 of them were slaughtered in the town’s main mosque.

Israel’s numerous war crimes and crimes against humanity, and its continual defiance of international law and the UN Charter, together forfeit all claim to legitimacy as far as Arabs and non-Arabs around the world are concerned – at least, those that haven’t been bribed to say otherwise.
UN Resolution 194 called on Israel to let the Palestinians back onto their land. It has been reiterated many times, but Israel still ignores it. The Israelis also stand accused of violating Article 42 of the Geneva Convention by moving settlers into the Palestinian territories it occupies, and of riding roughshod over international law with their occupation of the Gaza Strip and West Bank.
As Plan D shows, “expulsion and transfer” (i.e. ethnic cleansing) were always a key part of the Zionists’ scheme. According to historian Benny Morris, no mainstream Zionist leader could conceive of future coexistence without a clear physical separation between the two peoples. Ben-Gurion, who became Israel’s first prime minister, is reported to have said in 1937: “New settlement will not be possible without transferring the Arab fallahin [peasants]…” The following year he declared: “With compulsory transfer we have a vast area [for settlement]… I support compulsory transfer. I don’t see anything immoral in it.”
On another occasion he remarked:

If I were an Arab leader I would never make terms with Israel. We have taken their country. Sure, God promised it to us, but what does that matter to them? Our God is not theirs. We come from Israel, it is true, but 2,000 years ago, and what is that to them? There has been anti-Semitism, the Nazis, Hitler, Auschwitz, but was that their fault? They only see one thing: we have come here and stolen their country.

Ben-Gurion reminded his military commanders that the prime aim of Plan D was the ethnic cleansing of Palestine. He was well aware of his own criminality.
It is high time the Palestine solidarity movement circulated Plan D/Plan Dalet far and wide and, in particular, brought it to the attention of political half-wits who stooge for and support the Israeli regime and turn a blind eye to its unbridled terrorism.