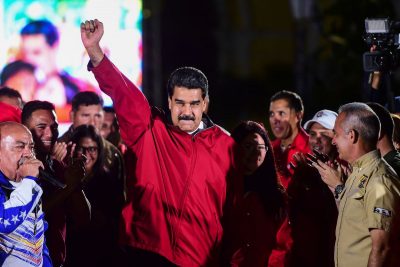 On Friday, The New York Times continued its long, predictable tradition of backing U.S. coups in Latin America by publishing an editorial praising Donald Trump’s attempt to overthrow Venezuelan President Nicolas Maduro. This will be the 10th such coup the paper has backed since the creation of the CIA over 70 years ago.
A survey of The New York Times archives shows the Times editorial board has supported 10 out of 12 American-backed coups in Latin America, with two editorials—those involving the 1983 Grenada invasion and the 2009 Honduras coup—ranging from ambiguous to reluctant opposition. The survey can be viewed here. Covert involvement of the United States, by the CIA or other intelligence services, isn’t mentioned in any of the Times’ editorials on any of the coups. Absent an open, undeniable U.S. military invasion (as in the Dominican Republic, Panama and Grenada), things seem to happen in Latin American countries entirely on their own, with outside forces rarely, if ever, mentioned in the Times. Obviously, there are limits to what is “provable” in the immediate aftermath of such events (covert intervention is, by definition, covert), but the idea that the U.S. or other imperial actors could have stirred the pot, funded a junta or run weapons in any of the conflicts under the table is never entertained.
More often than not, what one is left with, reading Times editorials on these coups, are racist, paternalistic “cycle of violence” cliches. Sigh, it’s just the way of things Over There. When reading these quotes, keep in mind the CIA supplied and funded the groups that ultimately killed these leaders:

See, it didn’t matter! It’s worth pointing out the military junta put in power by the CIA-contrived coup killed 10,000 to 30,000 Argentines from 1976 to 1983.
There’s a familiar script: The CIA and its U.S. corporate partners come in, wage economic warfare, fund and arm the opposition, then the target of this operation is blamed. This, of course, isn’t to say there isn’t merit to some of the objections being raised by The New York Times—whether it be Chile in 1973 or Venezuela in 2019. But that’s not really the point. The reason the CIA and U.S. military and its corporate partisans historically target governments in Latin America is because those governments are hostile to U.S. capital and strategic interests, not because they are undemocratic. So while the points the Times makes about illiberalism may sometimes be true, they’re mostly a non sequitur when analyzing the reality of what’s unfolding.
Did Allende, as the Times alleged in 1973 when backing his violent overthrow, “persist in pushing a program of pervasive socialism” without a “popular mandate”? Did, as the Times alleged, Allende “pursue this goal by dubious means, including attempts to bypass both Congress and the courts”?

Before Venezuela: The Long History of U.S. Intervention in Latin America

But Allende’s supposed authoritarianism isn’t why the CIA sought his ouster. It wasn’t his means of pursuing redistributive policies that offended the CIA and U.S. corporate partners; it was the redistributive policies themselves.
Hand-wringing over the anti-democratic nature of how Allende carried out his agenda without noting that it was the agenda itself—not the means by which it was carried out—that animated his opponents is butting into a conversation no one in power is really having. Why, historically, has The New York Times taken for granted the liberal pretexts for U.S. involvement, rather than analyzing whether there were possibly other, more cynical forces at work?
The answer is that rank ideology is baked into the premise. The idea that the U.S. is motivated by human rights and democracy is taken for granted by The New York Times editorial board and has been since its inception. This does all the heavy lifting without most people—even liberals vaguely skeptical of American motives in Latin America—noticing that a sleight of hand has taken place. “In recent decades,” a 2017 Times editorial scolding Russia asserted, “American presidents who took military action have been driven by the desire to promote freedom and democracy, sometimes with extraordinary results.” Oh, well, good then.
What should be a conversation about American military and its covert apparatus unduly meddling in other countries quickly becomes a referendum on the moral properties of those countries. Theoretically a good conversation to have (and one certainly ongoing among people and institutions in these countries), but absent a discussion of the merits of the initial axiom—that U.S. talking heads and the Washington national security apparatus have a birthright to determine which regimes are good and bad—it serves little practical purpose stateside beyond posturing. And often, as a practical matter, it works to cement the broader narrative justifying the meddling itself.
Do the U.S. and its allies have a moral or ethical right to determine the political future of Venezuela? This question is breezed past, and we move on to the question of how this self-evident authority is best exercised. This is the scope of debate in The New York Times—and among virtually all U.S. media outlets. To ante up in the poker game of Serious People Discussing Foreign Policy Seriously, one is obligated to register an Official Condemnation of the Official Bad Regime. This is so everyone knows you accept the core premises of U.S. regime change but oppose it on pragmatic or legalistic grounds. It’s a tedious, extortive exercise designed to shift the conversation away from the United States’ history of arbitrary and violent overthrows and into an exchange about how best to oppose the Official Bad Regime in question. U.S. liberals are to keep a real-time report card on these Official Bad Regimes, and if these regimes—due to an ill-defined rubric of un-democraticness and human rights—fall below a score of say, “60,” they become illegitimate and unworthy of defense as such.
While obviously not in Latin America, it’s also worth noting that the Times cheerled the CIA-sponsored coup against Iran’s President, Mohammad Mossadegh, in 1953. Its editorial, written two days after his ouster, engaged in the Times’ patented combination of victim-blaming and “oh dear” bloviating:

Again, no mention of CIA involvement (which the agency now openly acknowledges), which the Times wouldn’t necessarily have had any way of knowing at the time. (This is part of the point of covert operations.) Mossadegh is summarily demonized, and it’s not until decades later the public learns of the extent of U.S. involvement. The Times even gets in an orientalist description of Iranians, implying why a strong Shah is necessary:

[The average Iranian] has nothing to lose. He is a man of infinite patience, of great charm and gentleness, but he is also—as we have been seeing—a volatile character, highly emotional, and violent when sufficiently aroused.

Needless to say, there are major difference between these cases: Mossadegh, Allende, Chavez and Maduro all lived in radically different times and championed different policies, with varying degrees of liberalism and corruption. But the one thing they all had in common is that the U.S. government, and a compliant U.S. media, decided they “needed to go” and did everything to achieve this end. The fundamental arrogance of this assumption, one would think, is what ought to be discussed in the U.S. media—as typified by the Times’ editorial board—but time and again, this assumption is either taken for granted or hand-waved away, and we all move on to how and when we can best overthrow the Bad Regime.
For those earnestly concerned about Maduro’s efforts to undermine the democratic institutions of Venezuela (he’s been accused of jailing opponents, stacking the courts and holding Potemkin elections), it’s worth pointing out that even when the liberal democratic properties of Venezuela were at their height in 2002 (they were internationally sanctioned and overseen by the Carter Center for years, and no serious observer considers Hugo Chavez’s rule illegitimate), the CIA still greenlit a military coup against Chavez, and the New York Times still profusely praised the act. As it wrote at the time:

With yesterday’s resignation of President Hugo Chávez, Venezuelan democracy is no longer threatened by a would-be dictator. Mr. Chávez, a ruinous demagogue, stepped down after the military intervened and handed power to a respected business leader, Pedro Carmona.

Chavez would soon be restored to power after millions took to the streets to protest his removal from office, but the question remains: If The New York Times was willing to ignore the undisputed will of the Venezuelan people in 2002, what makes anyone think the newspaper is earnestly concerned about it in 2019? Again, the thing that’s being objected to by the White House, the State Department and their U.S. imperial apparatchiks is the redistributive policies and opposition to the United States’ will, not the means by which they do so. Perhaps the Times and other U.S. media—living in the heart of, and presumably having influence over, this empire—could try centering this reality rather than, for the millionth time, adjudicating the moral properties of the countries subject to its violent, illegitimate whims.