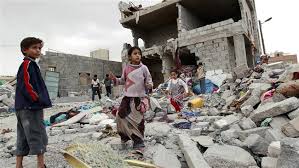 Since March of 2015 the United States has engineered and guided a genocidal war against the people of Yemen.
Daily bombing operations by the Saudi Arabian-led Gulf Cooperation Council (GCC) has killed tens of thousands of people, injured and sickened hundreds of thousands more and created the worse humanitarian crisis in the world.
At present Yemen is facing famine due to the targeting of hospitals, schools and neighborhoods in an effort to break the will of the people to resist this military onslaught. The strategic port at Hodeida is a key element in the campaign waged by the Saudi-GCC coalition to starve the Yemini population into submission.
Nonetheless, the U.S. and British-backed forces are nowhere nearer to defeating the Ansurallah-led coalition which has seized huge swaths of territory in the north, central and southern regions of the country, the most underdeveloped and impoverished in the entire West Asia. A renewed battle launched by the Saudi-allied militias to take control of Hodeida has failed amid stiff resistance by the Popular Committees committed to defending this important outlet for essential goods flowing into the country.
Even after the call for a ceasefire by the administration of President Donald Trump and the British Prime Minister Theresa May, the attacks by the Saudi-GCC coalition have escalated. Such a course of action raises serious questions about the sincerity of the appeal for the resumption of United Nations brokered talks to end the horrendous war.
It should be reiterated that the warplanes, ordnances, refueling technology and diplomatic cover provided by Washington and London have been essential in the Saudi-GCC war against Yemen since 2015. Successive U.S. administrations and British governments continue to supply arms to the Saudi monarchy and its cohorts in the region.
The apparent premeditated killing of Washington Post columnist Jamal Khashoggi at the Saudi embassy in Turkey has highlighted the links between Washington and Riyadh. The response to the killing of Khashoggi by the Trump administration has been cautious and muted.
Perhaps in an effort to deflect attention away from the implicit guilt of Washington, the Trump administration called for a cessation of hostilities and the beginning of efforts to end the war which has regional implications. The political reasoning of the U.S. for their sponsoring of the genocidal onslaught in Yemen is based upon allegations that the Ansurallah movement is supported by the Islamic Republic of Iran.
This imperialist rationale is aimed at containing the influence of Tehran which is a major threat to the hegemony of Saudi Arabia and the United Arab Emirates (UAE), both of whom are staunch participants in the broader designs for total western hegemony in the region. The inability to dislodge the Ansurallah and the Popular Committees exposes the obvious limitations of such an approach therefore emboldening resistance forces seeking a genuine independent and sovereign existence for the people of West Asia and beyond.
An article published by Press TV on November 7 based upon a speech delivered by Ansurallah leader Abdul-Malik al-Houthi says:

“The US role in the military operations against our nation is pivotal. All fiendish plots against Yemen are hatched by the US, Saudi Arabia and the United Arab Emirates (UAE). Traitors just struggle to carry them out on the ground. Washington is speaking of peace at the same time that it is directing the Yemen war. Traitors are operating under the auspices of Saudi Arabia and the UAE, and executing their orders.”

This same speech by al-Houthi points directly at the role of the U.S. noting that those “allies” of Saudi Arabia are viewed as mere pawns in the process. The Ansurallah leader claimed that the desire by Washington to reap profits from the sale of weapons to Riyadh is the driving force in the war.
Al-Houthi is quoted as emphasizing that:

“The United States has managed to reap tremendous financial gains, including arms deals, from the Saudi-led aggression on Yemen. Washington is supporting the Riyadh regime to be able to stand [on] its feet. It is also managing the violent and criminal role of Saudi Arabia. The recent uptick in attacks on Yemen comes as a number of (Persian) Gulf littoral states, notably Saudi Arabia and the UAE, are warming their relations with the Zionist regime (of Israel).”

Genocidal War Brings Yemen to the Brink of Famine
The character of the Yemen war as represented by the deliberate targeting of civilians many of whom are internally displaced persons (IDPs) and refugees impacted by wars throughout the region is largely being hidden from the people of the U.S. and Britain. In many cases reports on the humanitarian crisis in Yemen fail to mention the daily bombings and ground operations notwithstanding the supply of arms and other forms of assistance by the imperialists.
Assessments by the United Nations Humanitarian Coordinator Mark Lowcock conveys that three-quarters of the people in Yemen, a nation of over 28 million, are in dire need of food, healthcare, medicines, potable water and housing. This same agency is predicting that the country could be the scene of the worst famine witnessed anywhere in the world in generations.
A cholera epidemic has sickened over one million people since 2017. Official figures published by the World Health Organization (WHO) indicate that approximately 2,500 have died from this disease which is contracted through the consumption of contaminated drinking water. 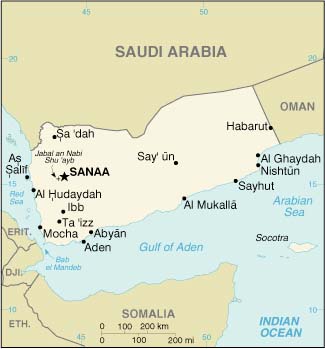 Bombing and ground operations around Hodeida port has hampered the ability of healthcare facilities to provide emergency services. This siege of the port on the Red Sea represents the entry point for 85% of the food supplies imported into the country.
In a statement released on November 8 by Dr. Ahmed Al-Mandhari, the WHO Regional Director for the Eastern Mediterranean, the humanitarian specialist provides details on the current situation around the port city of Hodeida. The attempts of the Saudi-GCC coalition to dislodge the Popular Committees from the area have further endangered 2.4 million people living and working there.
Dr. Al-Mandhari in his statement said:

“The current violence in Al Hudaydah (Hodeida) is placing tens of thousands of already vulnerable people at risk, and preventing WHO from reaching them with the help they urgently need. The violence, now in close proximity to the area hospitals, is affecting the movement and safety of health staff, patients and ambulances, as well as the functionality of health facilities, leaving hundreds without access to treatment…. The people of Yemen are victims of this tragic, man-made crisis. Many have died due to the violence, some directly but most as the result of restricted access to health care, causing deaths that are normally preventable.” (See this)

Post-Elections Context for U.S. Foreign Policy in Yemen
Worldwide attention has been focused on the November 6 midterm elections in the U.S. which resulted in the Republican Party losing its majority in the House of Representatives and at the same time gaining several seats within the Senate, increasing its dominance over this legislative wing of the Congress. A split government will intensify the existing struggle over the domestic policies governing the country in the realms of immigration, healthcare, race relations and environmental regulations, etc.
Nonetheless, there have been virtually no differences related to foreign policy questions among the Democrats and the Republicans. The current phase of the war against Yemen began under the administration of former Democratic President Barack Obama. There was no serious attempt to end the war in 2015-2016, therefore the Trump administration inherited the situation and has continued the attempts to defeat the Ansurallah and its allies within the Popular Committees.
Vermont Senator Bernie Sanders earlier in 2018 sought to pass a resolution calling for an end to direct military support for Saudi-GCC war. This effort failed and there are no clear signals as to whether the incoming 2019 Democratic majority House will even debate the current military assistance provided to Saudi Arabia and the UAE.
Both the Democratic and Republican parties are controlled by the U.S. ruling class. Even though the two groupings have different constituencies within the population, decisions related to war and peace has continued to favor the militarization of the society.
Resources allocated for imperialist wars abroad and state repression domestically could be utilized for the rebuilding of the cities, suburbs and rural areas of the U.S. Tens of millions remain in poverty as the gap between rich and poor widens.
These issues will only be resolved through a fundamental shift in the control of economic and political institutions in the U.S. Until the government is forced by the people to end its wasteful and genocidal war machine the world will continue to experience instability and dislocation.