‘Entirely Preventable’ Deaths of 85,000 Yemeni Children Is Part of What Trump Has Embraced With ‘America First’ Allegiance to Saudis

“For children under the age of five this situation is proving a death sentence.”
by: Jessica Corbett

The London-based NGO Save the Children estimates some 85,000 children under the age of five have died in Yemen due to starvation over the past three years. (Photo: Fuad/UNICEF)
As President Donald Trump faces criticism for issuing a “dangerous” and “imbecilic” statement in which he vowed to stand by Saudi Arabia despite the murder of Jamal Khashoggi, a London-based organization is estimating that some 85,000 children under age five have starved to death in Yemen since the U.S.-backed, Saudi- and UAE-led coalition launched military action there three years ago.

“For every child killed by bombs and bullets, dozens are starving to death and it’s entirely preventable.”
—Tamer Kirolos, Save the Children

Drawn from United Nations data, Save the Children’s new figure is, as the Guardian put it, “a conservative estimate.”
“For every child killed by bombs and bullets, dozens are starving to death and it’s entirely preventable,” declared Tamer Kirolos, the group’s country director in Yemen. “Children who die in this way suffer immensely as their vital organ functions slow down and eventually stop. Their immune systems are so weak they are more prone to infections with some too frail to even cry.”
A mother whose 13-month-old Nusair is being treated by Save the Children for severe acute malnutrition, or SAM, told the Guardian, “I am scared of the war and worried we won’t have food. It is distressing.” She added: “I can’t go to sleep, it is torturing, and I am worried about my children. I couldn’t live if any harm came to them.” 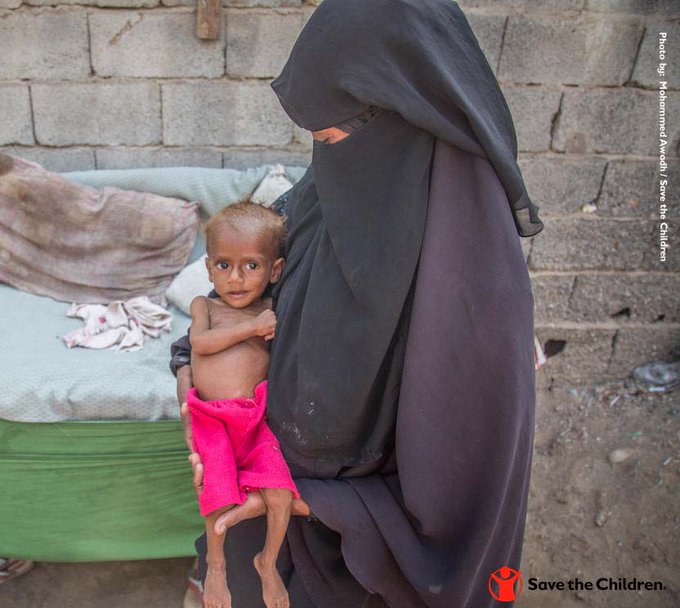 Save the Children US

85,000 children may have died from starvation since start of war in #Yemen http://ow.ly/vm3J30mHwQd  #YemenCantWait

The Saudi blockades and bombing campaign have produce the world’s worst humanitarian crisis, killing tens of thousands of Yemenis and putting 14 million more—half the country’s population—at risk of famine. That number, Save the Children noted, “has increased dramatically” since a blockade last year that reduced the commercial imports of food through the Hodeidah port.

How many more children in Yemen must die from starvation? pic.twitter.com/DaqKQWUh3y

“For children under the age of five this situation is proving a death sentence,” concluded Bhanu Bhatnagar, a Save the Children spokesman. “What is shocking about Yemen is that these 85,000 deaths are not a result of drought or climate change, they are entirely the result of a manmade conflict that is fueled by countries who have the power to stop it.”
As World Food Program (WFP) executive director David Beasley told the U.N. Security Council last week: “What I have seen in Yemen this week is the stuff of nightmares, of horror, of deprivation, of misery. And we—all of humanity—have only ourselves to blame.”
However, instead of halting the violence and subsequent suffering, the coalition has ramped up the bombing campaign. Calling for “an immediate end to the fighting so no more lives are lost,” Kirolos pointed out that “in the past few weeks there have been hundreds of airstrikes in and around Hodeidah, endangering the lives of an estimated 150,000 children still trapped in the city.”
Khashoggi’s assassination has put a spotlight on the Trump administration’s support for Saudi Arabia—particularly considering that the CIA has reportedly concluded that Crown Prince Mohammed bin Salman, or MbS, personally ordered the killing. Although the U.S. recently stopped refueling Saudi aircraft, human rights advocates, aid agencies, and members of Congress have called for a full withdrawal of U.S. support for the war in Yemen.
Trump, meanwhile, seems to have made up his mind to continue backing the Saudis. “It could very well be that the Crown Prince had knowledge of this tragic event—maybe he did and maybe he didn’t! That being said, we may never know all of the facts,” the president said Tuesday. “In any case, our relationship is with the Kingdom of Saudi Arabia.”
Speaking outside the White House on Tuesday, Trump said the murder of Khashoggi “is what it is.” And referencing his decision to stand with Saudi Arabia, he added, “It’s America first to me.”

The current regime in Saudia Arabia:

– Killed a Washington Post journalist, Jamal #Khashoggi
– Bombed a schoolbus in Yemen that killed 40 children
– Leading a war in #Yemen that has left 500,000 children facing famine