Yair Rosenberg’s job at The Atlantic is to bait anti-Zionists. But when these discussions become real issues he slinks away, because he is not prepared to defend the claims in a real world discussion. 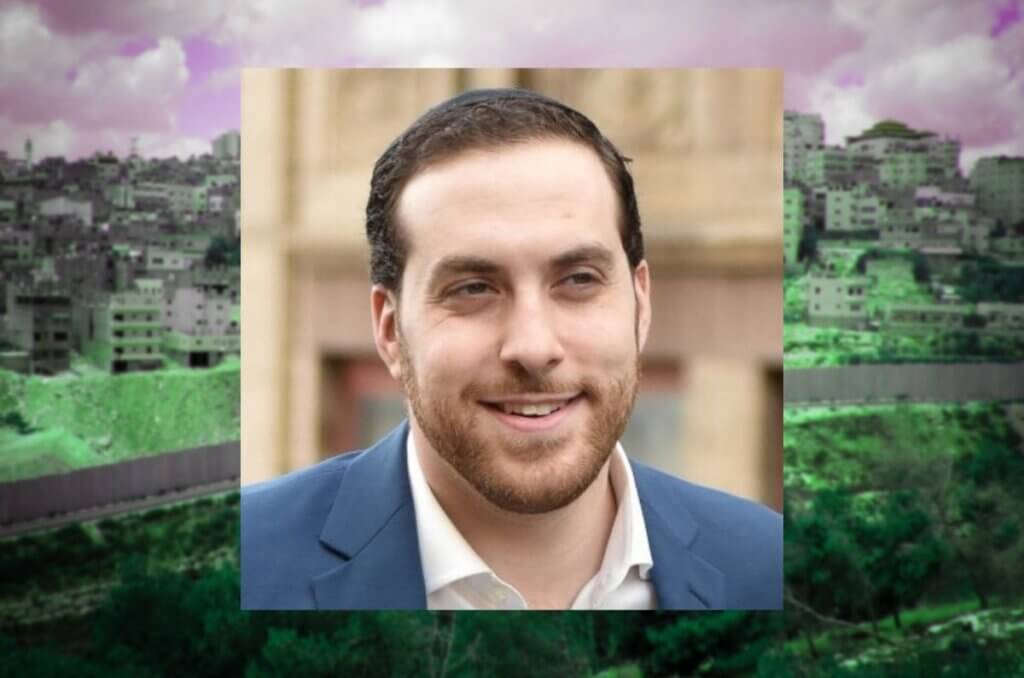 Editor’s Note: The article is part of our series Hasbara Culture from Yakov Hirsch. You can read the entire series here.

I have argued that it is a cultural tragedy that Yair Rosenberg was recently chosen as The Atlantic’s Israel/anti-Semitism expert. Last week Rosenberg again proved why.

Our story starts with an April 20th tweet from IMEU, the Institute for Middle East Understanding:

The Tweet showed a video of a group of young Israeli Jews chanting “Death to Arabs.”

Now, as it turns out that IMEU used a video from a “Death to Arabs” mob not from 2022 but from 2021. But the videos are almost identical. Check it out for yourselves, in IMEU’s subsequent correction.

So, what does Atlantic’s Israel/anti-Semitism expert Yair Rosenberg, make of the IMEU Tweet?

You might wonder why you should care. Why does it matter what a newbie at the Atlantic thinks of a IMEU tweet? The reason it matters is because as I have shown “Never Again” journalists, as the Washingtonian once called Jeffrey Goldberg, create political culture. And that’s because “Never again” journalists speak for the Jews. They speak for Jewish authority.  And by hiring Rosenberg, his hasbara culture protégé, Goldberg, Atlantic’s editor in chief, who used to “speak for the Jews” is now passing this authority down to Rosenberg. Goldberg is passing on the hasbara culture baton. By hiring Rosenberg, Goldberg shows he would like Rosenberg to have the last word on anti-Semitism for American and Jewish political culture.

And this is a cultural catastrophe. Why? Just look how Rosenberg responded to the IMEU Tweet:

Rosenberg is claiming that the IMEU intentionally used last year’s video instead of this year’s. That they “decided” to tweet last year’s video and “pretend it was today” because police had foiled the demonstration this year. Rosenberg supposedly “knows” what (the nefarious) “anti-Israel propaganda” account is up to. Because “Never Again” journalists claim expertise on the “enemies” of Israel.

In his next tweet Rosenberg “proves” that IMEU intentionally tweeted the wrong video:

Since the IMEU account shared the same video last year, Rosenberg concludes they must have “purposely set out to fool other people with an old, misrepresented video.”

Of course, this is all hasbara culture projection. IMEU’s point about the “Death to Arabs” chant is true no matter the year. When IMEU realized the mistake they tweeted:  Correction: “This video was taken at the June 2021 flag march. Here is the video of Israeli settlers chanting ‘Death to Arabs’ at the flag march on Wednesday.”

Every non hasbara culturalist realizes the mistake was innocent. Rosenberg was saying that IMEU intentionally put up the wrong video to deceive people.

The Palestinian political activist Omar Baddar, communications director for IMEU, made the same point in response to Rosenberg’s aspersion:

Here’s what’s wrong w/this👇pathetic attempt by an apartheid apologist to smear a credible org over the (now corrected) accidental error of posting last year’s “death to Arabs” Israeli hate fest video instead of this year’s (yes, hate mobs are an ongoing phenomenon)

Yair’s dishonest implication is that 2021 was an exception, but the reality is that mobs of Israeli settlers chanting “death to Arabs” is a central and ongoing feature of Israeli political culture dating back decades. The scenes look similar every year so it’s easy to mix’em up.

When Baddar contemplates what the IMEU tweeter “was thinking” he not surprisingly comes up with an entirely different narrative than Rosenberg. Baddar’s narrative is from the real world, Rosenberg’s narrative is from hasbara culture. Hasbara culture constantly cultivates hatred by misinterpreting the world. And following his mentor’s lead, Rosenberg has spent his career misinterpreting the world.

Let’s look at a few past examples of Rosenberg wielding his hasbara culture craft.

Look at how Rosenberg “decodes” the Palestinian activist Linda Sarsour:

This is hasbara culture in action.

I don’t know what Sarsour said that Rosenberg is referring to, but it doesn’t matter. Because nothing “means” what hasbara culture claims it “means.” “Never again” journalists like Rosenberg are invariably wrong when they “decode” their targets. And it gives Rosenberg no pause that there are many Jews who know Sarsour personally and professionally, who find his accusation slanderous. Here is a statement by over one hundred liberal Jewish leaders quoted in the Forward on the “assaults” on Sarsour:

“We will not stand by as Sarsour is falsely maligned, harassed and smeared, as she, her organization and her family suffer vicious public threats and intimidation… We unequivocally oppose these assaults against her, and publicly state our commitment to working alongside her for a more just and equal society.”

But what other Jews think of Sarsour’s “antisemitism” doesn’t matter because “Never again” journalists have become the new Jewish clergy. They speak from sacred Jewish history.

And Rosenberg claimed this same Jewish authority on Minnesota Rep. Ilhan Omar. He claims to know what’s going on in her head. He’s the best at understanding what she means. Rosenberg claims special knowledge on what Omar “was thinking” when she committed her various trope and canard crimes.

By hiring Rosenberg, Goldberg agrees that Rosenberg represents “We Jews.” Rosenberg writes, “We Jews have centuries of hard experience in spotting this stuff.” Rosenberg speaking for the Jews, “spotted” that Omar was intentionally sending out “tropes” about Jews. And notice again that once hasbara culture reaches its verdict it doesn’t matter what other Jews think.

Consider the Jewish journalist Paul Waldman. He has a different “Jewish” opinion about what Omar “was thinking” when she committed her supposed antisemitism.  Waldman (who was “raised in an intensely Zionist family with a long history of devotion and sacrifice for Israel”) called his column, “The dishonest smearing of Ilhan Omar.” Waldman argues that those who claim Omar “was secretly referring to Jews” are slandering her.

But again it doesn’t matter what Waldman or other Jews think. Because it is “Never Again” journalists who speak for the Jews on antisemitism. That’s the reason the House passed two resolutions on antisemitism as a direct rebuke for Omar’s supposed “anti-Semitism.” This is an example of Never Again journalists creating political culture with powerful consequences. It is thanks to hasbara culture that so many are convinced that Omar hates the Jews and wants to “annihilate” Israel

So, why is it that people like Rosenberg have so much cultural influence? Does Yair Rosenberg have six PhD’s on antisemitism? No, he doesn’t even have one. What makes Rosenberg special is that he insists he can detect Jew-hatred that is lost on others. Non hasbara culture Jews like Waldman and antisemitism scholars and academics have no understanding of “eliminationist anti-Semitism” and “medieval incubuses.” No, that is the forte of Never Again journalists.

Notice that Rosenberg doesn’t have to know anything about Ilhan Omar the human being. Because he understands Omar better than all Omar’s Jewish friends. As an expert on tropes and canards, Rosenberg can interpret certain things that Omar says that are lost on Jews who know her and insist she is no hater.  And Jews who try to stand up to Goldberg or Rosenberg are accused of “minimizing anti-Semitism.”

And as I have shown, no one is more responsible for the hasbara culture rout of Jewish sanity than Jeffrey Goldberg.

Rosenberg is following in his mentor’s footsteps in not needing to know anything about Sarsour and Omar in order to render hasbara culture judgment. Jeffrey Goldberg didn’t need to know anything about his many hasbara culture marks over the years. For instance, Stephen Walt, co-author of The Israel Lobby was a long-time target of Goldberg and hasbara culture. Goldberg “decoded” Walt as a Jew-hater. Walt defended himself against Goldberg’s calumnies in a 2010 article in Foreign Affairs called “Goldberg goes bananas (again)”:

Goldberg’s forte is character assassination, and his main weapons are name-calling and misrepresenting his opponents’ arguments. Instead of calling me a “Jew-baiter” (a despicable accusation for which he has no grounds), as he has in the past, his latest sally calls me a “neo-Lindberghian,” again implying that I am an anti-Semite. This is a serious charge — the political equivalent of calling someone a racist or child molester — and you’d think a respectable journalist would go to some effort to document the label before using it. You’d think he’d supply a lengthy array of quotations from my writings and speeches to prove his point. Goldberg cannot do this, however, because no such evidence exists.

Now notice what Walt says next. Walt can’t understand by what authority Goldberg is making these claims about him. Walt points out that Goldberg knows very little about Walt:

Goldberg doesn’t know me; doesn’t know my history, relatives, friends, students, and close associates, and has no idea what I really think about any of these questions. Judging by what he writes about my work, he doesn’t even know what I’ve written.

But Goldberg has no need to know anything about Walt! Goldberg “knows” Walt the same way Rosenberg knows Sarsour and Omar. All that “Never again” journalists need to know is “ideas” about antisemitism.  Knowing the actual human beings behind the tropes is superfluous.

Which brings us back to the IMEU tweet. Rosenberg does to the tweeter what he did to Sarsour and Omar.  He again uses his supposed antisemitism expertise to tell us the real meaning of the IMEU tweet. What the person/people who tweeted this are really thinking.

Now see what happened next. Baddar invited Rosenberg to debate the topic on its merits:

“And should Yair ever decide that he can debate the topic on merits, I’d be more happy to take him up on it.”

But Rosenberg didn’t respond to Baddar. He just moved on. Because hasbara culture can’t debate the real world on its merits.

That’s why Rosenberg is silent about ADL’s declaration of war on anti-Zionism that everyone is talking about. Rosenberg has spent the last decade waging a holy war against anti-Zionists. (All those tweets have since been deleted.) It is hasbara culture dogma that anti-Zionism is antisemitism. Yet Rosenberg is silent about the brouhaha now. And that’s also why he ignored the Harvard Crimson pro-BDS editorial. No one has agitated more against BDS than Goldberg and Rosenberg.

The reason is that like Jeffrey Goldberg, Rosenberg is not only an ideologue but an operator. And operators need to ignore a lot of Jewish/Israel news because they don’t want to get into an actual debate. “Never Again” journalists aren’t debaters, they’re agitators. They can’t actually debate Peter Beinart over whether anti-Zionism is antisemitism, because in the real-world, of course Anti-Zionism is not antisemitism. What would Rosenberg argue with Beinart? He would just look foolish.

So, the same “Never Again” journalist who supplied the agitation and ideological ammunition for the ADL’s Anti-Zionism=Antisemitism position and the anti-BDS hysteria, has now gone silent– just when the ADL needs him out there on the battlements.

For the same reason Rosenberg ignored Baddar’s challenge. Operators are not debaters. Rosenberg wants this whole thing to go away. He realizes that hasbara culture agitation is not good for his mainstream career, if he actually had to defend his claims about IMEU’s thinking.

But Rosenberg’s 100k Twitter followers are still left with his misinterpretation and defamation of IMEU. “Never Again” journalists have no accountability.

Jeffrey Goldberg and The Atlantic owe it to their readers to clarify: Yair Rosenberg doesn’t speak for the Jews; he speaks for hasbara culture.

Correction: This article initially stated that Rosenberg had deleted his tweets about IMEU’s video. Thanks to a commenter for pointing out the inaccuracy. I have corrected it. I apologize for the error.