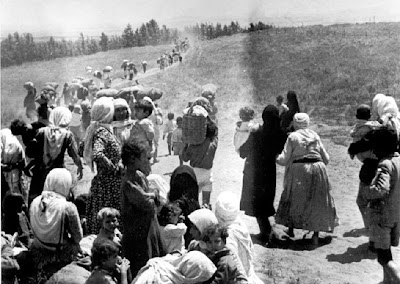 Displacement from Ramle, 1948.
http://www.badil.org/Publications/Press/2009/press508-09.htm
Statistics released by UN agencies on the occasion of the 2009 World Refugee Day testify to the fact that Palestinian refugees are the largest and longest standing refugee population world wide. They lack access to just solutions and reparations, including return, because Israel and western governments continue to deny or belittle the scope of the problem and make no effort to respect and implement relevant international law and best practice.
According to a forthcoming Survey of Palestinian Refugees and Internally Displaced Persons for the years 2007-2008 produced by Badil, at least 7.6 million Palestinians have been forcibly displaced since 1948 as a consequence of Israel’s systematic policies and practices of colonization, occupation and apartheid.
That figure represents 71 percent of the entire worldwide population of 10.6 million Palestinians. Only 28.7 percent of all Palestinians have never been displaced from their homes. (click here for information pdf)
The great majority of the displaced (6.2 million people – 81.5 percent) are Palestinian refugees of 1948 (the Nakba), who were ethnically cleansed in order to make space for the state of Israel and their descendants. This figure includes 4.7 million Palestinian refugees registered with the United Nations (UNRWA) at the end of 2008. The second major group (940,000 – 12.5%) are Palestinian refugees of 1967, who were displaced during the 1967 Arab-Israel war and their descendants.
More attention and concern should be given to the phenomenon of forced displacement of Palestinians because it is ongoing.
Steadily growing populations of internally displaced Palestinians (IDPs) are the result of ongoing forced displacement in Israel (approximately 335,000 IDPs since 1948) and the Occupied Palestinian Territory since 1967 (approximately 120,000 IDPs since 1967). Badil’s Survey identifies a set of distinct, systematic and widespread Israeli policies and practices which induce ongoing forced displacement among the indigenous Palestinian population, including deportation and revocation of residency rights, house demolition, land confiscation, construction and expansion of Jewish-only settlements, closure and segregation, as well as threats to life and physical safety as a result of military operations and harassment by racist Jewish non-state actors.
Israeli governments implement these policies and practices in order to change the demographic composition of certain areas (“Judaization”) and the entire country for the purpose of colonization.
Data about the scope of ongoing forced displacement of Palestinians is illustrative and indicative, because there is no singular institution or agency mandated and resourced to ensure systematic and sustained monitoring and documentation. The total number of persons displaced in 2007 – 2008 is unknown.
UN agencies, however, confirm that 100,000 Palestinians were displaced from their homes in the occupied Gaza Strip at during Israel’s military operation at the end of the year; that 198 communities in the OPT currently face forced displacement; and that 60,000 Palestinians in occupied East Jerusalem are at risk of having their home demolished by Israel.
The Palestinian refugee question has remained unresolved and forced displacement continues, because Western governments and international organizations have been complicit in Israel’s illegal policy and practice of population transfer and have failed to protect the Palestinian people.
Indicators of the severe gaps existing in the protection of Palestinian refugees and IDPs are seen in the recent crises in Iraq – where thousands of Palestinian refugees became stranded on the Jordanian/Syrian and Iraqi borders, Lebanon – where 27,000 Palestinians refugees of the Naher al-Bared camp are still waiting to return to their 2007 destroyed camp, and Gaza – where over 1,400 Palestinians were killed and 100,000 displaced, most of them 1948 refugees).
On this World Refugees Day, Badil calls upon all those concerned with justice, human rights and peace to:
Challenge Israel’s racist notion of the “Jewish state” and immediately halt its practices of displacement, dispossession and colonization;
Strengthen the global Campaign for Boycott, Divestment and Sanctions (BDS) in order to ensure that Israel other states become accountable to international law and respect their obligations;
Improve the mechanism of international protection so that all Palestinians receive effective protection from, during and after forced displacement, including the right to return as part of durable solutions and reparation;
Ensure that the Palestinian refugee question is treated in accordance with international law and UN resolutions in future peace negotiations, including return and reparation.