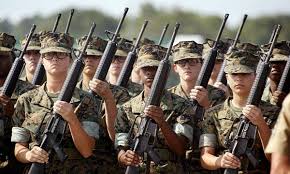 By this Memorial Day, nearly 150 U.S. female troops have made the ultimate sacrifice in the Iraq and Afghanistan wars, with over 700 wounded. Although Department of Defense policy precludes women from being assigned to ground combat-infantry units, women have for years served in combat situations where they’re just as vulnerable.

Marine Lance Corp. Angelica Jimenez, 26, was one of them.

On June 25, 2005, Jimenez was riding in the back of a truck carrying 14 female Marines near the Iraqi hotbed of Fallujah. The all-female unit was tasked with searching and questioning Iraqi women at security checkpoints, ensuring they were not armed with explosives. Since females were not allowed to sleep at the checkpoints as their male counterparts were, every day the women would be driven to and from an American base, making them a visible target each time they hit the road. It was only a matter of time before their luck would run out, and that night, it did.

A car approached their convoy, moments before it ran straight towards the women’s truck. Packed with explosives, it detonated on impact, enveloping all 14 women in a deadly fireball. Most of the women were severely burned. Two women died immediately, one later that night, in what would become the deadliest attack on servicewomen since 1991.

Jimenez was knocked unconscious. She remembers waking up, directly in the line of insurgent fire, her flak jacket covered in blood, her M-16 gone.

“Convoys are always dangerous, anything that involves going outside the base is dangerous, outside the base, those are all very much dangerous jobs,” she said. Jimenez was part of a communications command, but was selected for the month of June to man security checkpoints into Fallujah, a role she served along with her fellow male Marines.

“We were doing the same thing,” Jimenez said. “Women are just as capable. I don’t like being called a ‘female Marine’ versus a ‘Marine’ — we all graduated from the same bootcamp.”

Since 1994, the Department of Defense’s combat exclusion policy prohibits the assignment of women to any unit below brigade level when the unit’s primary mission is direct combat on the ground. However, according to DOD spokesperson Eileen Lainez, the policy does not “preclude women from being involved in ground combat.”

Blurring the lines further, the Army precludes women from being “assigned” to ground combat infantry units, but allows them to be “attached” to such units, where they often perform the same roles their male counterparts would.

“The nature of today’s conflicts is evolving; there are no front lines in Iraq and Afghanistan,” Lainez said. “While women are not assigned to units below brigade level whose primary mission is direct combat on the ground, this doesn’t mean they are not assigned to positions in combat zones that could place them in danger.”

The policy defines ground combat as “engaging the enemy on the ground with individual or crew served weapons, while being exposed to hostile fire and to a high probability of direct physical contact with the hostile force’s personnel.” Genevieve Chase, veteran of Operation Enduring Freedom and founder of American Women Veterans, found herself in that situation while serving in 2006 in the hotspots of Helmand and Bagram, where counterinsurgency strategy emphasizes building relationships with locals including Afghan women who won’t talk to a male stranger.

“In both Iraq and Afghanistan, female troops have worked from day one outside the wire,” Chase told ABC News. “In war, you do what you can. You can’t withhold somebody because of their gender. If you are in charge of an aid station with three female medics, and this infantry unit needs another medic, you’re sending them a medic. Rules in combat are very different.”

But while Chase served alongside men and carried the same weapons, the policy precluded her from having the same combat training as the infantrymen.

“When women are ‘attached’ to these ground infantry units, we are actually more vulnerable because we don’t have the same level of training as the men that we support,” she said.

In addition, she said, teams train together as a unit, which allows them to create team cohesion, build rapport, and understand everyone on the team’s strengths and weaknesses so that in a combat situation, everyone knows what to do, and how each other will react.

From the first day a soldier enters the Army, she said, the basic combat training that combat support units undergo differs greatly from the training that infantry units receive.

“Downrange,” Chase said, “women have stepped up to serve in leadership roles when necessary, including acting as a commander of an all-male unit.”

When asked about her colleague’s experience Chase said, “She brought all her soldiers home, it doesn’t matter who brings them home, as long as they all come home.”

“You want the best person leading your team. The ability to make decisions under pressure, keep your composure, remain calm and collected, all while maintaining your courage under fire — those attributes are not gender specific.”

“Women serving in combat environments are being shot at, killed and maimed,” Lyles said in March. “‘But they’re not getting the credit for being in combat arms.”

Lainez said department officials “will thoroughly evaluate” the panel’s recommendations as part of their ongoing review of diversity policies. Meantime, she said, “Women will continue to be assigned to units and positions that may necessitate combat actions within the scope of their restricted positioning – situations for which they are fully trained and equipped to respond.”

“The Department is committed to performing the comprehensive and expansive review of the laws, policies, and regulations restricting service of female service members, and will provide Congress with a report as required upon completion of the review,” Lainez said.

Specifically, opponents argue that women are physically weaker than men — especially in upper body strength, and behave more emotionally than men. Also, sexual or romantic feelings that arise could affect unit cohesiveness or focus on a mission.

“I served with men that were so macho and overprotective, then when it really actually got sticky, they weren’t worried about me, the training kicked in, everybody did what they were supposed to do. We were professionals.”

Chase agrees there will have to be a thorough review on whether to rescind the policy, and that rescinding without a plan as to how to implement changes would be premature. But, she added, “It’s long past time to revise the current policy so that it accurately reflects the capacity with which women have and will continue to serve in our armed forces. It gives combatant commanders the ability to truly build the most cohesive, well-trained and effective teams for their respective missions.”

Jimenez, who still deals with the visible and invisible wounds inflicted from the attack, hopes that one day, when people think Marine, it won’t always be a man they picture.

“No one will ever look at me like I was a Marine,” she said. “When I tell people that I was a former Marine, they usually say, ‘Are you serious?’

“As long as people acknowledge that we were there too,” she said.