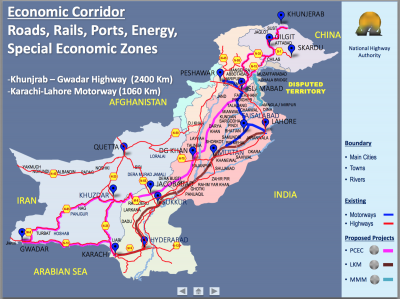 The Chinese Ambassador to India suggested that his country could rename and even reroute the China-Pakistan Economic Corridor, popularly known as CPEC, in order to appease New Delhi.

His Excellency Mr. Luo Zhaohui proposed this controversial idea in a speech at the Centre for Chinese and South-East Asian Studies late last week, which is the second time that he spoke about it when considering that the first instance was half a year ago in May. It’s difficult to interpret why this is being brought up yet again, though there are two branches of understanding that can help with figuring out what might be going on. The first one of course is that the Ambassador isn’t serious about the proposal and is simply bringing it up for diplomatic reasons and in order to temporarily alleviate India’s hysterical jingoistic worries about CPEC. That’s indeed very possible, though the second school of thought on this topic is equally plausible as well, and it’s that Beijing might actually be somewhat serious about this suggestion.

To explain, China would ideally like for India to join its One Belt One Road (OBOR) global vision of New Silk Road connectivity, as the complementary synergy between these two Asian Great Powers could literally have world-changing consequences for International Relations, but New Delhi’s ultra-nationalist government has thus far refrained from this due to its maximalist approach to the Kashmir Conflict and fears of being inundated with Chinese goods. In an attempt to temper their unease, Ambassador Zhaohui proposed that China could “create an alternative corridor through Jammu and Kashmir, Nathu La pass or Nepal to deal with India’s concerns”, which would in essence connect over two billion people and create a powerhouse of geopolitical gravity if it was successful. The problem, however, is that this is more of a liberal fantasy than a functional plan when considering that all indicators point to India’s reluctance to ever agree to this proposal, especially since the South Asian state is in the process of formulating a 100-year-long strategy with the US, as revealed by Secretary of State Rex Tillerson earlier last month. Therefore, it’s fair to suppose that any members of China’s permanent military, intelligence, and especially diplomatic bureaucracies – or “deep state” – who believe in this are followers of the liberal school of thought, which might also suggest that some of them might even believe the unfounded fake news reports about Pakistan’s stability and security, ergo why they would publicly entertain renaming and potentially even rerouting CPEC.

The $250 billion worth of deals that Trump agreed to during his visit to the People’s Republic a few weeks ago might have also had an influence on Ambassador Zhaohui’s revival of his curious proposal, whether as a symbolic diplomatic gesture or a serious initiative. At the end of the day, however, it’s very unlikely that China would ever reroute CPEC because of the grand strategic purpose that the project fulfills in providing Beijing with reliable overland access to the Indian Ocean through which almost all of its Eastern Hemispheric trade traverses, and as for renaming this project, it can’t do so unilaterally without Pakistan’s approval and that won’t ever happen because CPEC has become inseparable from the country’s 21st-century international branding.

The post presented is the partial transcript of the CONTEXT COUNTDOWN radio program on Sputnik News, aired on Friday Nov 24, 2017: