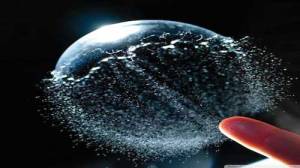 By Uri Avnery
Poor John Kerry. This week he emitted a sound that was more expressive than pages of diplomatic babble.
In his testimony before the US Senate’s Foreign Relations Committee he explained how the actions of the Israeli government had torpedoed the “peace process”. They broke their obligation to release Palestinian prisoners, and at the same time announced the enlargement of more settlements in East Jerusalem. The peace efforts went “poof”.
“Poof” is the sound of air escaping a balloon. It is a good expression, because the “peace process” was from the very beginning nothing more than a balloon full of hot air. An exercise in make-believe.
John Kerry cannot be blamed. He took the whole thing seriously. He is an earnest politician, who tried very, very hard to make peace between Israel and Palestine. We should be grateful for his efforts.
The trouble is that Kerry had not the slightest idea of what he was getting himself into.

The entire “peace process” revolves around a basic misconception. Some would say: a basic lie.
The lie is that we have here two equal sides of a conflict. A serious conflict. An old conflict. But a conflict that can be solved when reasonable people of the two sides sit down together and thrash it out, guided by a benevolent and impartial referee.

If the two sides to negotiations are so extremely unequal, the situation can only be remedied by the mediator supporting the weaker side. What is happening is the very opposite: the American support for Israel is massive and unstinting.

Not one detail of these assumptions was real. The referee was not impartial.  The leaders were not sensible. And most importantly: the sides were not equal.
The balance of power between the two sides is not 1:1, not even 1:2 or 1:10. In every material respect – military, diplomatic, economic – it is more like 1:1,000.
There is no equality between occupier and occupied, oppressor and oppressed. A jailer and a prisoner cannot negotiate on equal terms. When one side has total command of the other, controls his every move, settles on his land, controls his money flow, arrests people at will, blocks his access to the UN and the International courts, equality is out of the question.
If the two sides to negotiations are so extremely unequal, the situation can only be remedied by the mediator supporting the weaker side. What is happening is the very opposite: the American support for Israel is massive and unstinting.
Throughout the “negotiations” the US did nothing to check the settlement activity that created more Israeli facts on the ground – the very ground whose future the negotiations were all about.

A prerequisite for successful negotiations is that all sides have at least a basic understanding not only of each other’s interests and demands, but even more of each other’s mental world, emotional setup and self-image. Without that, all moves are inexplicable and look irrational.

The average American statesman has not the slightest idea of Arab history, worldview, religions, myths or the traumas that shape Arab attitudes, not to mention the Palestinian struggle.

Boutros Boutros-Ghali, one of the most intelligent people I have met in my life, once told me: “You have in Israel the most intelligent experts on the Arab world. They have read all the books, all the articles, every single word written about it. They know everything, and understand nothing. Because they have never lived one day in an Arab country.”
The same is true for the American experts, only much more so. In Washington DC one feels the rarefied air of a Himalayan peak. Seen from the grandiose palaces of the administration, where the fate of the world is decided, foreign people look small, primitive and largely irrelevant. Here and there some real experts are tucked away, but nobody really consults them.
The average American statesman has not the slightest idea of Arab history, worldview, religions, myths or the traumas that shape Arab attitudes, not to mention the Palestinian struggle. He has no patience for this primitive nonsense.
Seemingly, the American understanding of Israel is much better. But not really.
Average American politicians and diplomats know a lot about Jews. Many of them are Jews. Kerry himself seems to be partly Jewish. His peace team includes many Jews, even Zionists, including the actual manager of the negotiations, Martin Indyk, who worked in the past for American Israel Public Affairs Committee, AIPAC. His very name is Yiddish (and means a turkey).
The assumption is that Israelis are not very different from American Jews. But that is entirely false. Israel may claim to be the “nation-state of the Jewish people”, but that is only an instrument for exploiting the Jewish diaspora and creating obstacles for the “peace process”. In reality there is very little similarity between Israelis and the Jewish diaspora, not much more than between a German and a Japanese.

If Barack Obama and Kerry knew more, they would have realized from the beginning that the present Israeli political setup makes any Israeli evacuation of the settlements, withdrawal from the West Bank and compromise about Jerusalem quite impossible.

Martin Indyk may feel an affinity with Tzipi Livni, the daughter of an Irgun fighter (or “terrorist” in British parlance), but that is an illusion. The myths and traumas that shaped Tzipi are very different from those that shaped Martin, who was educated in Australia.
If Barack Obama and Kerry knew more, they would have realized from the beginning that the present Israeli political setup makes any Israeli evacuation of the settlements, withdrawal from the West Bank and compromise about Jerusalem quite impossible.
All this is true for the Palestinian side, too.
Palestinians are convinced that they understand Israel. After all, they have been under Israeli occupation for decades. Many of them have spent years in Israeli prisons and speak perfect Hebrew. But they have made many mistakes in their dealings with Israelis.
The latest one was the belief that Israel would release the fourth batch of prisoners. This was almost impossible. All Israeli media, including the moderate ones, speak about releasing “Palestinian murderers”, not Palestinian activists or fighters. Right-wing parties compete with each other, and with rightist “terror-victims”, in denouncing this outrage.
Israelis do not understand the deep emotions evoked by the non-release of prisoners – the national heroes of the Palestinian people, though Israel itself has in the past exchanged a thousand Arab prisoners for one single Israeli, citing the Jewish religious command of “redemption of prisoners”.

Palestinians… have made many mistakes in their dealings with Israelis. The latest one was the belief that Israel would release the fourth batch of prisoners.

It has been said that Israel always sells a “concession” three times: once when promising it, once when signing an official agreement about it and thirdly when actually fulfilling the undertaking. This happened when the time came to implement the third withdrawal from the West Bank under the Oslo agreements, which never happened.
Palestinians know nothing about Jewish history as taught in Israeli schools, very little about the holocaust, even less about the roots of Zionism.
Recent negotiations started as “peace talks”, continued about a “framework” for further negotiations, and now the talks have degenerated to talks about the talks about the talks.

Fear of the alternative to make-believe

Nobody wants to break off the farce, because all three sides are afraid of the alternative.
The American side is afraid of a general onslaught of the Zionist-evangelical-Republican-Adelson bulldozer on the Obama administration in the next elections. Already the State Department is frantically trying to retreat from the Kerry “poof”. He did not mean that only Israel is to blame, they assert, the fault lies with both sides. The jailer and the prisoner are equally to blame.
As usual, the Israeli government has many fears. It fears the outbreak of a thirdIntifada, coupled with a worldwide campaign of delegitimization and boycott of Israel, especially in Europe.
It also fears that the UN, which at present recognizes Palestine only as a non-member state, will go on and promote it more and more.
The Palestinian leadership, too, is afraid of a third Intifada, which may lead to a bloody uprising. Though all Palestinians speak about a “non-violent Intifada”, few really believe in it. They remember that the last Intifada also started non-violently, but the Israeli army responded by deploying snipers to kill the leaders of the demonstrations, and more suicide bombing became inevitable.
President Mahmoud Abbas (Abu Mazen) has responded to the non-release of the prisoners, which amounted to a personal humiliation, by signing the documents necessary for the Palestinian state to join 15 international conventions. The Israeli government exploded in anger. How dare they?
In practice, the act means little. One signature means that Palestine joins the Geneva Convention. Another concerns the protection of children. Shouldn’t we welcome this? But the Israeli government fears that this is one step nearer to the acceptance of Palestine as a member of the International Criminal Court, and perhaps the indictment of Israelis for war crimes.
Abbas is also planning steps for a reconciliation with Hamas and the holding of Palestinian elections, in order to strengthen his home front.
If you were poor John Kerry, what would you say to all this?
“Poof!” seems the very minimum.