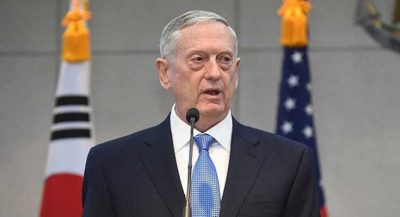 One thing can be said about the new Pentagon National Defense Strategy document just released under the name of Defense Secretary Jim Mattis. It is honest about what the target of US military policy is going forward. Washington military policy is explicitly aimed to keep China and Russia from developing any alternative counter-pole to unchallenged US military and political supremacy. The new document lays this out in no uncertain terms. The details are notable and show the disarray that is Washington today, as its once-firm grip on world power disintegrates.

The document is worth careful reading. In the declassified public version it states at the very introduction,

“Today we are emerging from a period of strategic atrophy, aware that our competitive military advantage has been eroding. We are facing increased global disorder, characterized by decline in the long-standing rules-based international order—creating a security environment more complex and volatile than any we have experienced in recent memory. Inter-state strategic competition, not terrorism, is now the primary concern in US national security.”

To refer to the period as one of strategic atrophy is not entirely accurate for the power that has waged wars non-stop, direct and surrogate, from Asia to the Middle East to covert regime change operations around the world since it invaded Afghanistan in October 2001. Honest is the statement that the US strategic competitive military advantage has been eroding. This erosion, however is a direct consequence of the erosion of the US economy and the increasingly desperate efforts of Washington to dictate to the world according to their wishes and not respecting sovereignty of nations or peoples.

The key phrase is “Inter-state strategic competition, not terrorism, is now the primary concern in U.S. national security.” What is this “inter-state strategic competition” that relegates the so-called war on terrorism to the back seat in priority? It is, simply said, the emergence of significant economic, technological and military powers and alliances that feel strong enough to assert their own national interest. For the Pentagon, which operates under the 1992 Wolfowitz Doctrine, strategic rivals to US sole superpower dominance, is not to be.

In 1992, Pentagon policy unofficially became what is called the Wolfowitz Doctrine. During the administration of President G.H.W. Bush as Washington was engaged in the looting and destruction of the former Soviet Union, using a CIA-asset named Boris Yeltsin as the vehicle, when Dick Cheneywas Defense Secretary, Undersecretary of Defense Paul Wolfowitz, authored the Defense Strategy for the 1990s. One of the original statements of that read:

Undercutting the ‘Rules of the Road’

“China and Russia are now undermining the international order from within the system by exploiting its benefits while simultaneously undercutting its principles and ‘rules of the road.’”

This suggests that in the eyes of Washington for other nations to abide by the rules of the present system, including of the UN, to “exploit” its benefits for their gain, is a heinous or criminal act. The terminology suggests that Washington feels China and Russia are driving their role in the world today at a speed that is not to the liking of the Sole Superpower.

It gets even more interesting, as the US strategy paper calls China, “a strategic competitor using predatory economics to intimidate its neighbors while militarizing features in the South China Sea.” And for its part, it states,

“Russia has violated the borders of nearby nations and pursues veto power over the economic, diplomatic, and security decisions of its neighbors.”

Mattis goes on to accuse China and Russia of wanting to, “shape a world consistent with their authoritarian model—gaining veto authority over other nations’ economic, diplomatic, and security decisions.” The veto authority is clear reference to repeated China and Russia UN Security Council vetoes of US resolutions that would have long ago utterly destroyed Syria for purposes of a Washington re-carving the Middle East to its advantage. Mattis goes on to declare that,

“China is leveraging military modernization, influence operations, and predatory economics to coerce neighboring countries to reorder the Indo-Pacific region to their advantage.”

Predatory economics? The choice of adjective creates the emotional image without explanation. The Pentagon document omits the history of decades of Washington “predatory” economics in which the US wrote the international trade “rules of the road” for WTO, for finance, for competition to the unique advantage of US-based multinational corporations. That they call “free market.”

Then, in what is a clear reference to China’s major Belt, Road Initiative, its new Economic Silk Road, the Pentagon policy document attacks China as that country “continues its economic and military ascendance, asserting power through an all-of-nation long-term strategy.” It would be a major positive development were Washington itself to pursue a comparable infrastructure investment and an “all-of-nation long-term strategy.” That kind of national infrastructure investment to rebuild the huge deficit of lack of domestic USA investment does not seem to be on Washington’s agenda beyond the level of vague campaign promises about “making America great again.”

For its part, the Pentagon accuses Russia of seeking, “veto authority over nations on its periphery in terms of their governmental, economic, and diplomatic decisions, to shatter the North Atlantic Treaty Organization, and change European and Middle East security and economic structures to its favor.” The Pentagon insists, “The use of emerging technologies to discredit and subvert democratic processes in Georgia, Crimea, and eastern Ukraine is concern enough, but when coupled with its expanding and modernizing nuclear arsenal the challenge is clear.

Conveniently omitted is the fact that it was Washington in 2014 that created what has been accurately called “the most blatant coup in US history” to install an anti-Russian regime of oligarchs and neo-Nazis in Ukraine and in Georgia, or that a citizen referendum in Crimea saw a vote of 93% to ask to become part of the Russian Federation, not of Ukraine. The idea Russia is out to “shatter” NATO conveniently omits the reality that Washington in 2003 broke solemn promises made in 1990 to the Russians that NATO would never expand eastwards towards Russia as a precondition for Moscow allowing German unification.

And it was Washington that in 2007 announced the destabilizing placement of US missiles in Poland and other NATO states aimed at Russia in what was euphemistically termed US “missile defense,” in reality preparation for a US nuclear First Strike potential aimed at Russia. Moreover the CIA and State Department created color revolutions in Georgia and Ukraine in 2004 in a vain effort to bring NATO to the doorstep of Moscow.

In sum the 2018 National Defense Strategy of the Pentagon is a de facto declaration that the US superpower, bankrupt and ailing as it is, will do everything imaginable militarily to block the upbuilding of Eurasia around the peaceful emergence of the Russia-China economic cooperation in terms of energy, financial cooperation, infrastructure as well as defense cooperation and anti-terror activities.

The Mattis paper is honest in naming China and Russia by name as the central threat to a continued USA sole superpower hegemony. The consequences in terms of growing US military confrontation against both China and Russia, however, may present an economically-declining USA with the similar dilemma which the British Empire faced on the eve of World War I. US debt levels, deteriorated economic base and eroding support internationally for a President who acts like a petulant school brat, are not the most favorable backdrop to “make America great again.”