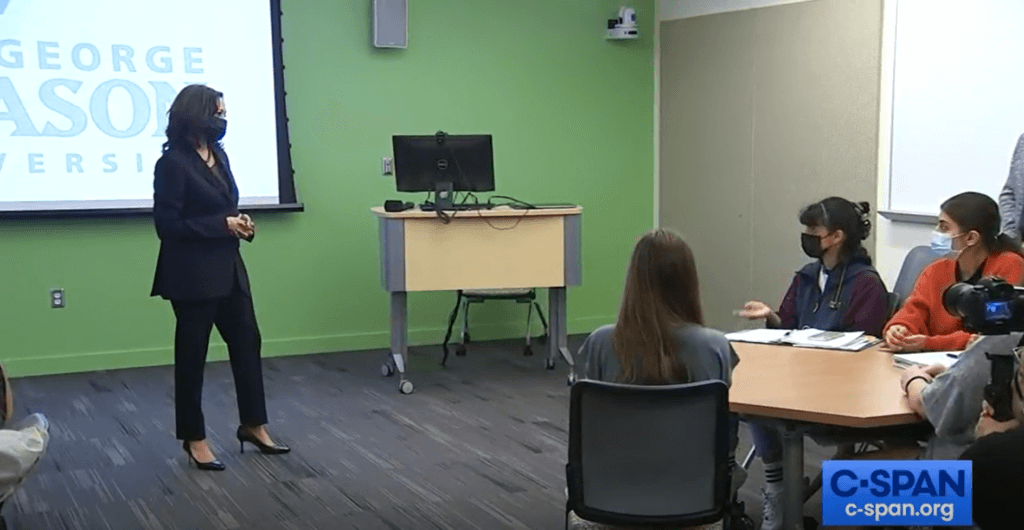 This is an amazing story. Vice President Kamala Harris visited a political science class at George Mason University in Virginia on Tuesday and after a Middle Eastern student described personal pain over Israel committing “ethnic genocide and displacement of people, the same that happened in America,” Harris nodded and said everyone’s perspective must be included in a democracy. The interchange became a scandal — and Harris has rushed to assure pro-Israel groups that she disagrees with the student.

“Harris’ office is calling up prominent pro-Israel groups and leaders for damage control after she was confronted by — and did not push back on — a student who said Israel was committing ethnic genocide,” Politico reports.

Harris reached out to among others, the Democratic Majority for Israel, Rep. Ted Deutch and Jonathan Greenblatt of the Anti-Defamation League.

Democratic Majority for Israel then issued a statement:

We were pleased Vice President Harris’s senior staff reached out to us today to confirm what we already knew: Her ‘commitment to Israel’s security is unwavering,’ and she ‘strongly disagrees with the George Mason student’s characterization of Israel.’

The matter blew up because Israeli media had their knickers in a twist. The Jerusalem Post said Harris “validated” the student’s charge, headlining its story: “US Vice President Kamala Harris applauded a student who accused Israel of ‘ethnic genocide,’ saying ‘your truth cannot be suppressed.’”

Here’s the original classroom exchange, as Michael Arria reported in The Shift. Harris was visiting the school to mark voter registration day. The student, said to be of Yemeni/Iranian background, says:

I see that over the summer there have been protests and demonstrations in astronomical numbers standing with Palestine, but then just a few days ago there were funds allocated to continue backing Israel, which hurts my heart because it’s ethnic genocide and displacement of people, the same that happened in America, and I’m sure you’re aware of this.

I bring this up because Americans are struggling over lack of healthcare, lack of affordable housing. All this money ends up funding Israel and backing Saudi Arabia. I think the people have spoken very often on what they do need and I feel there’s a lack of listening. I just feel I have to bring this up because it affects my life and the lives of people I really care about. It’s just something I had to bring up.

Harris nodded several times and said she was glad the student brought it up:

I’m glad you did and again this is about the fact that your voice, your experience, your perspective, your truth cannot be suppressed, and it must be heard, right. And one of the things that we’re fighting for in a democracy. A democracy is its strongest when everyone participates. and it’s weakest when anyone is left out…. Our goal should be unity but not uniformity…

But unity should never be at the expense of telling any one person, for the sake of unity, oh you be quiet about that thing, you suppress that thing… True unity is everybody in that room has a voice, and we see where that ends up in terms of a healthy debate on the issues, right. And the point you’re making… that relates to Middle East policies, foreign policy, we still have healthy debates in our country about what is the right path and nobody’s voice should be suppressed on that.

Harris’s openness was highly troubling to Israel advocates and now she has done damage control. Jonathan Greenblatt of the ADL tweeted yesterday:

Just spoke with @VP office. Glad to hear her confirm she is proud of her record supporting #Israel, and knows claim it is committing ‘ethnic genocide’ is patently false. Looking fwd to a clearing of the record so there’s no ambiguity that what that student said was hateful/wrong.

.@RepTedDeutch tells me that VP’s staff affirmed to him “her longstanding support for the state of Israel and her rejection of the student’s outrageous accusation of genocide” and that he’s “sure they will say publicly what they confirmed to me today.”

Jewish Insider, a pro-Israel news site widely read in the political community, got a statement from Symone Sanders, Harris’s chief spokesperson: “Throughout her career, the Vice President has been unwavering in her commitment to Israel and to Israel’s security. While visiting George Mason University to discuss voting rights, a student voiced a personal opinion during a political science class. The Vice President strongly disagrees with the student’s characterization of Israel.”

And now the leading Jewish Dems group has published an op-ed by Halie Soifer, who once served Harris in the Senate, saying “I saw first-hand her commitment to the U.S.-Israel relationship, Israel’s security, and its right to self-defenses.”

By the way, Democratic Majority for Israel is only two years old, but it is in AIPAC spinoff inside the Democratic Party and it raises a lot of money, so when it says jump, politicians say, How high?

Also by the way, Ted Deutch lately smeared Rep. Rashida Tlaib as an antisemite for stating on the House floor that Israel practices apartheid, as validated by human rights organizations. No Democratic leader or Jewish leader let alone the vice president has called on him to apologize. (Beth Miller of Jewish Voice for Peace Action says, “What we saw was the deepseated vicious anti-Paletinian racism that exists in Congress on just full open display…No one defended her. Not even one of her colleagues got up and said… something like, ‘These attacks on Rep. Tlaib are unacceptable and we won’t allow for these kinds of attacks.’ No one even did that. And it is honestly so shocking and horrifying to me..’”)