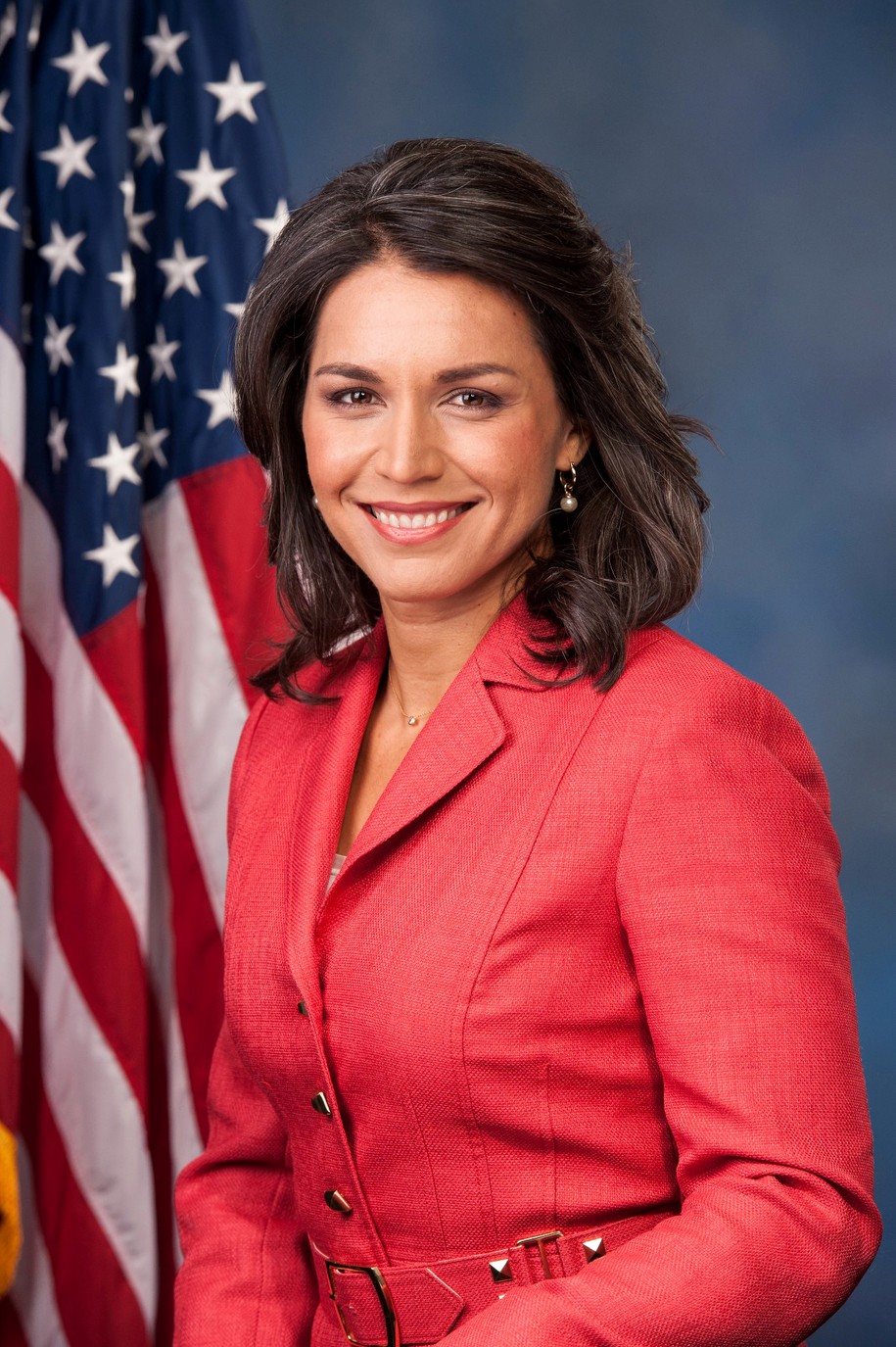 Washington, DC—Rep. Tulsi Gabbard (HI-02) introduced the Stop Arming Terrorists Act today. The legislation would prohibit the U.S. government from using American taxpayer dollars to provide funding, weapons, training, and intelligence support to groups like the Levant Front, Fursan al Ha and other allies of Jabhat Fateh al-Sham, al-Qaeda and ISIS, or to countries who are providing direct or indirect support to those same groups.

The legislation is cosponsored by Reps. Peter Welch (D-VT-AL), Barbara Lee (D-CA-13), Dana Rohrabacher (R-CA-48), and Thomas Massie (R-KY-04), and supported by the Progressive Democrats of America (PDA) and the U.S. Peace Council.

Video of Rep. Tulsi Gabbard’s speech on the House floor is available here

Rep. Tulsi Gabbard said, “Under U.S. law it is illegal for any American to provide money or assistance to al-Qaeda, ISIS or other terrorist groups. If you or I gave money, weapons or support to al-Qaeda or ISIS, we would be thrown in jail. Yet the U.S. government has been violating this law for years, quietly supporting allies and partners of al-Qaeda, ISIL, Jabhat Fateh al Sham and other terrorist groups with money, weapons, and intelligence support, in their fight to overthrow the Syrian government.[i]

“The CIA has also been funneling weapons and money through Saudi Arabia, Turkey, Qatar and others who provide direct and indirect support to groups like ISIS and al-Qaeda. This support has allowed al-Qaeda and their fellow terrorist organizations to establish strongholds throughout Syria, including in Aleppo.

“A recent New York Times article confirmed that ‘rebel groups’ supported by the U.S. ‘have entered into battlefield alliances with the affiliate of al-Qaeda in Syria, formerly known as al Nusra.’ This alliance has rendered the phrase ‘moderate rebels’ meaningless. Reports confirm that ‘every armed anti-Assad organization unit in those provinces [of Idlib and Aleppo] is engaged in a military structure controlled by [al-Qaeda’s] Nusra militants.’

“A recent Wall Street Journal article reported that many rebel groups are ‘doubling down on their alliance’ with al Nusra. Some rebel groups are renewing their alliance, while others, like Nour al-Din al-Zinki, a former CIA-backed group and one of the largest factions in Aleppo are joining for the first time. “The Syria Conquest Front—formerly known as the al-Qaeda-linked Nusra Front—is deeply intermingled with armed opposition groups of all stripes across Syria’s battlefields.”

“The CIA has long been supporting a group called Fursan al Haqq, providing them with salaries, weapons and support, including surface to air missiles.  This group is cooperating with and fighting alongside an al-Qaeda affiliated group trying to overthrow the Syrian government. The Levant Front is another so-called moderate umbrella group of Syrian opposition fighters. Over the past year, the United States has been working with Turkey to give this group intelligence support and other forms of military assistance. This group has joined forces with al-Qaeda’s offshoot group in Syria.

“This madness must end. We must stop arming terrorists. The Government must end this hypocrisy and abide by the same laws that apply to its’ citizens.

“That is why I’ve introduced the Stop Arming Terrorists bill—legislation based on congressional action during the Iran-Contra affair to stop the CIA’s illegal arming of rebels in Nicaragua. It will prohibit any Federal agency from using taxpayer dollars to provide weapons, cash, intelligence, or any support to al-Qaeda, ISIS and other terrorist groups, and it will prohibit the government from funneling money and weapons through other countries who are directly or indirectly supporting terrorists,” concluded Rep. Tulsi Gabbard.

Stephen Kinzer, a senior fellow at the Watson Institute for International Studies at Brown University, and award-winning author and journalist said, “The proposal to stop sending weapons to insurgents in Syria is based on the principle that pouring arms into a war zone only intensifies suffering and makes peace more difficult to achieve. Congress made a decision like this about the Nicaraguan contras during the 1980s. Aid to the contras was cut off by the Boland Amendment. The result was a peace process that finally brought an end to wars not only in Nicaragua, but also in El Salvador and Guatemala. This is the example we should be following. Cutting off arms shipments forces belligerents to negotiate. That is what we achieved in Nicaragua. It should be our goal in Syria as well.”

Donna Smith, Executive Director of Progressive Democrats of America said, “Progressive Democrats of America believes that it is fundamentally wrong for the United States to fund those groups or individuals aligned with al-Qaeda, Jabhat Fateh al-Sham, ISIS, or other terrorist/extremist organizations.  The ‘Stop Arming Terrorists’ bill authored by Rep. Tulsi Gabbard, of Hawaii’s 2nd Congressional District, would help bring an end to the human tragedy unfolding in Syria where the haunting eyes of the innocent children of Aleppo call on us all to stop supporting those who threaten and kill them with ferocious intention. War is war, and terrorism is terrorism whether waged by the state or from external forces. PDA supports this measure.”

Alfred Marder, President of the U.S. Peace Council said, “The U.S. Peace Council is honored to endorse and support the ‘Stop Arming Terrorists Bill’ as a major contribution to peace. This legislation will serve to galvanize the anti-war movement and the opposition to regime change policies that characterize our present foreign policy.”

Background: The Stop Arming Terrorists bill prohibits U.S. government funds from being used to support al-Qaeda, ISIS or other terrorist groups. In the same way that Congress passed the Boland Amendment to prohibit the funding and support to CIA backed-Nicaraguan Contras during the 1980’s, this bill would stop CIA or other Federal government activities in places like Syria by ensuring U.S. funds are not used to support al-Qaeda, Jabhat Fateh al-Sham, ISIS, or other terrorist groups working with them. It would also prohibit the Federal government from funding assistance to countries that are directly or indirectly supporting those terrorist groups. The bill achieves this by:

[i] Levant Front (U.S. backed, via the MOC in Turkey) is working under an Ahrar al Sham led umbrella group: http://www.understandingwar.org/sites/default/files/December%202%20EDITS%20COT_2.pdf ;