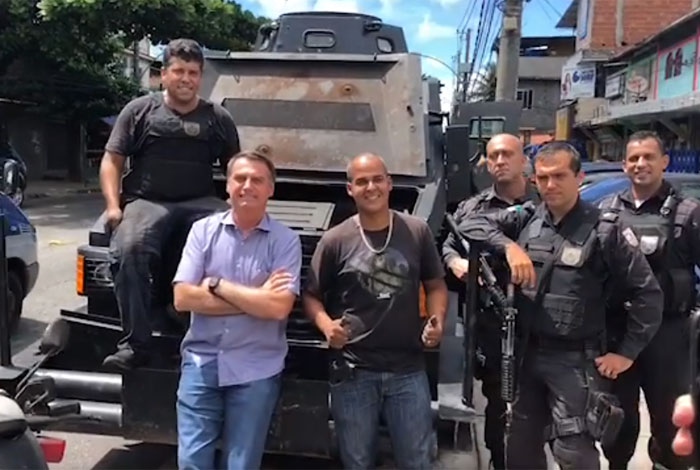 President-elect Jair Bolsonaro (center to left) poses with military police in the Rio de Janeiro neighborhood of Cidade de Deus. Bolsonaro has pledged to give police free reign in Brazil’s poorest areas in the name of fighting crime. (Facebook)
Merida, October 29, 2018 (venezuelanalysis.com) – Venezuela’s opposition has welcomed the victory of ultra-right candidate Jair Bolsonaroin Brazil’s presidential elections Sunday, calling on the new president-elect to intervene in Venezuela in line with their political goals.
Bolsonaro won the second round with 55 percent despite nearly 10 percent of ballots being marked null or void. Abstention was 22 percent, one point higher than the first round.
Following the controversial jailing and political barring of leftist frontrunner Lula da Silva on unfounded corruption charges, previously obscure nine-term congressman Bolsonaro soared to popularity in recent months, campaigning on an outsider platform of social conservatism, anti-corruption, and hardline anti-crime policies. Widely considered a “neo-fascist,” the far-right former army captain has repeatedly expressed nostalgia for Brazil’s military dictatorship, pledging to “cleanse” the country of leftists among numerous other inflammatory racist, sexist, and homophobic statements. His campaign team has also hinted at military action against Venezuela, raising concerns that Brazil could be used as a launchpad for a US-led strike on Caracas.
After the announcement of Sunday’s results the ex-president of Venezuela’s National Assembly and leader of the hard-right First Justice party, Julio Borges, took to Twitter to congratulate Bolsonaro, as well as to “invite him to work for the rescuing of democracy in Venezuela.” Borges is currently a fugitive of the Venezuelan justice system in Colombia on charges of conspiracy and alleged masterminding of the August drone terrorist attack against President Maduro.
To the right of First Justice, the Popular Will party also welcomed Bolsonaro’s victory, tweeting that they hope to “count on your struggle to rescue liberty and democracy in Venezuela.”
“We hope that your government will contribute to promoting peace and liberty in all of the countries in the region and in rescuing democracy in Venezuela,” declared Popular Will leading member Lilian Tintori.

For his part, ex-Caracas Mayor Antonio Ledezma, another fugitive currently based in Spain, likewise praised Bolsonaro as “an ally to confront the government.”
The opposition leaders’ comments mirrored those of Organisation of American States Secretary General Luis Almagro, himself a vociferous opponent of Venezuela, who tweeted his support for Bolsonaro’s “message of truth and peace.”
“We congratulate President-elect Jair Bolsonaro and aplaude his message of truth and peace. Count on the commitment of the Secretary General of the OAS to work together for democracy, human rights, security and development in the region,” he declared.
US President Donald Trump was also quick to place a congratulatory phone call to Bolsonaro, pledging joint military cooperation with Brasilia.
Following his electoral victory, Bolsonaro also reaffirmed his commitment to Washington and against Venezuela and Cuba, proclaiming, “We will stop praising murderous dictatorships, and we will stop scorning or even attacking important democracies like the USA, Israel and Italy.”

Had a very good conversation with the newly elected President of Brazil, Jair Bolsonaro, who won his race by a substantial margin. We agreed that Brazil and the United States will work closely together on Trade, Military and everything else! Excellent call, wished him congrats!

For its part, the Venezuelan government issued a formal statementcongratulating Bolsonaro and calling on him to “retake diplomatic relations based on respect, harmony, progress, and regional integration for the wellbeing of our peoples.” The Venezuelan-Brazilian border has turned increasingly hostile over recent months following increasing migratory traffic, xenophobic violence by Brazilian communities, and Brasilia’smilitarisation of the area.
Meanwhile, Venezuela leftist organizations expressed alarm at the election result, with many leaders and social movements wasting no time in evaluating its potential implications for the country.
One of Venezuela’s leading campesino groups, the Bolivar-Zamora Revolutionary Current (CRBZ), issued a statement decrying the result as “a true right hook to progressive and transforming processes in our continent.”
“[The outcome] obliges the Left to evaluate very seriously the causes and reasons… the ultra right was able to capitalise on the deep rejection of corruption [in Brazil] which has been embodied by a perverted political class… [with the previously ruling] Workers’ Party converting itself into a symbol of this perversion,”the CRBZ continued.
International relations secretary of the Venezuelan Communist Party, Carolus Wimmer, similarly proposed that non-structural populist policies of the Workers’ Party must be factored into explaining the result. “We must retake class-based struggle… the ascension of fascism in an emerging economy (…) marks the start of a deepening of the class struggle in our continent,” he argued.
He also underlined the role of the United States in Bolsonaro’s victory, recalling that Steve Bannon, ex-White House strategist, played “an important role in the campaigning and positioning of Bolsonaro as the leader of the discontent.”
Venezuelan revolutionary intellectual Luis Britto Garcia expressed concernthat the election result will spell a heightened military threat against Venezuela, stressing “We can’t carry on without border controls… This new context forces us to assume an extreme rethink of security and national defence… we must be conscious of the strategic doctrines which look to divide Venezuela.”
Chavista economist and ex-Finance Minister Luis Salas, however, took a less pesimistic position, suggesting that “the Left in general and in Latin America in general tends to have a catastrophic and depressive reading of history (…) Bolsonaro’s triumph is a step backwards, without a doubt, and there is great danger, but it is not the end of the world nor of history.”