In an exclusive interview with the Guardian, Venezuela’s president claims the Obama administration is fomenting unrest with the aim of provoking a Ukraine-style ‘slow-motion’ coup.

Link to video: Venezuelan president Nicolás Maduro: ‘We are all a little bit hippy, a little bohemian’Venezuela‘s president has accused the US of using continuing street protests to attempt a “slow-motion” Ukraine-style coup against his government and “get their hands on Venezuelan oil”.
In an exclusive interview with the Guardian, Nicolás Maduro, elected last year after the death of Hugo Chávez, said what he described as a “revolt of the rich” would fail because the country’s “Bolivarian revolution” was more deeply rooted than when it had seen off an abortive US-backed coup against Chávez in 2002.
Venezuela, estimated to have the world’s largest oil reserves, has faced continuous violent street protests – focused on inflation, shortages and crime – since the beginning of February, after opposition leaders launched a campaign to oust Maduro and his socialist government under the slogan of “the exit”.
“They are trying to sell to the world the idea that the protests are some of sort of Arab spring,” he said. “But in Venezuela, we have already had our spring: our revolution that opened the door to the 21st century”. 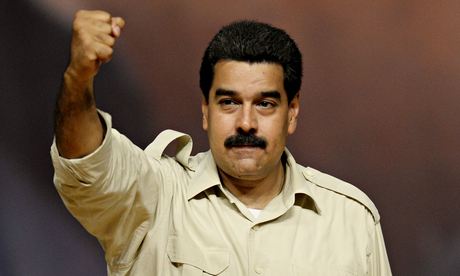 Nicolás Maduro has remained defiant after months of protests against his government, which he describes as ‘a revolt of the rich’. Photograph: Juan Barreto/AFP/Getty ImagesThe conflict has claimed up to 39 lives and posed a significant challenge to Maduro’s government. On Monday, the Venezuelanpresident agreed to a proposal by the South American regional group Unasur for peace talks with opposition leaders, who have up to now refused to join a government-led dialogue.The US denies involvement and says Venezuela is using the excuse of a coup threat to crack down on the opposition. Human Rights Watch and Venezuela’s Catholic hierarchy have also condemned the government’s handling of the protests, while Amnesty International has alleged human rights abuses by both sides.
Maduro claimed Venezuela was facing a type of “unconventional war that the US has perfected over the last decades”, citing a string of US-backed coups or attempted coups from 1960s Brazil to Honduras in 2009.
Speaking in the Miraflores presidential palace in Caracas, the former bus driver and trade union leader said Venezuela’s opposition had “the aim of paralysing the main cities of the country, copying badly what happened in Kiev, where the main roads in the cities were blocked off, until they made governability impossible, which led to the overthrow of the elected government of Ukraine.” The Venezuelan opposition had, he said, a “similar plan”.
“They try to increase economic problems through an economic war to cut the supplies of basic goods and boost an artificial inflation”, Maduro said. “To create social discontent and violence, to portray a country in flames, which could lead them to justify international isolation and even foreign intervention.” 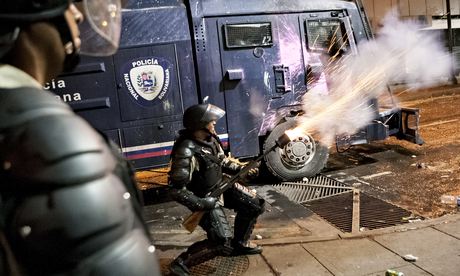 Venezuelan police clash with demonstrators in Caracas last month. Photograph: Santi Donaire/EPAPointing to the large increases in social provision and reduction in inequality over the past decade and a half, Maduro said: “When I was a union leader there wasn’t a single programme to protect the education, health, housing and salaries of the workers. It was the reign of savage capitalism. Today in Venezuela, the working class is in power: it’s the country where the rich protest and the poor celebrate their social wellbeing,” he said.Venezuela’s protests have been fuelled by high inflation, which reached a peak of 57% but has now fallen to a monthly rate of 2.4%, and shortages of subsidised basic goods, a significant proportion of which are smuggled into Colombia and sold for far higher prices. Opposition leaders accuse the government of mismanagement.
Recent easing of currency controls appear to have had a positive impact, and the economy continues to grow and poverty rates fall. But Venezuela’s murder rate – a target of the protests – is among the highest in the world.
About 2,200 have been arrested (190 or so are still detained) during two months of unrest, which followed calls by opposition leaders to “light up the streets with struggle” and December’s municipal elections in which Maduro’s supporters’ lead over the opposition increased to 10%.
Responsibility for the deaths is strongly contested. Eight of the dead have been confirmed to be police or security forces; four opposition activists (and one government supporter) killed by police, for which several police officers have been arrested; seven were allegedly killed by pro-government colectivo activists and 13 by opposition supporters at street barricades.
Asked how much responsibility the government should take for the killings, Maduro responded that 95% of the deaths were the fault of “rightwing extremist groups” at the barricades, giving the example of three motorcyclists killed by wire strung across the road by protesters. He said he has set up a commission to investigate each case. The global media was being used to promote a “virtual reality” of a “student movement being repressed by an authoritarian government”, he argued. “What government in the world hasn’t committed political or economic mistakes? But does that justify the burning down of universities or the overthrow of an elected government?”The protests, often led by students and overwhelmingly in well-off areas, have included arson attacks on government buildings, universities and bus stations. From a peak of several hundred thousand people in February, most recent demonstrations have dwindled in size and are restricted to opposition strongholds, such as Tachira state on the Colombian border.
A hardline opposition leader, Leopoldo López, who participated in the 2002 coup, and two opposition mayors have been arrested and charged with inciting violence. Another backer of the protests, María Corina Machado, was stripped of her post in parliament.
This was not “criminalising dissent”, Maduro insisted. “The opposition has full guarantees and rights. We have an open democracy. But if a politician commits a crime, calls for the overthrow of the legitimate government and uses his position to block streets, burn universities and public transport, the courts act.” Critics, however, insist the courts are politicised. 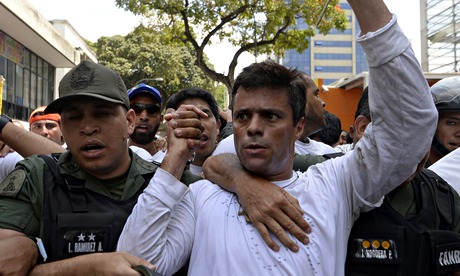 Leopoldo López is escorted by Venezuela’s national guard after surrendering in Caracas. Photograph: Juan Barreto/AFP/GettyLast month, the US secretary of state, John Kerry, claimed Venezuela was waging a “terror campaign” against its own citizens. But the Organisation of American States and the South American Unasur and Mercosur blocs of states backed the Venezuelan government and called for political dialogue.
Asked for evidence of US intervention in the protests, the Venezuelan president replied: “Is 100 years of intervention in Latin America and the Caribbean not enough: against Haiti, Nicaragua, Guatemala, Chile, Grenada, Brazil? Is the coup attempt against President Chávez by the Bush administration not enough? Why does the US have 2,000 military bases in the world? To dominate it. I have told President Obama: we are not your backyard anymore”.
Maduro pointed to evidence of past and present US intervention in Venezuela in Wikileaks cables, the whistleblower Edward Snowden’s revelations and US state department documents. They include cables from the US ambassador outlining US plans to “divide”, “isolate” and “penetrate” the Chávez government, and extensive US government funding of Venezuelan opposition groups over the past decade (some via agencies such as USAid and the Office for Transitional Initiatives),including $5m (£3m) of overt support in the current fiscal year.
Maduro’s allegations follow last week’s revelation that USAid covertly funded a social media website to foment political unrest and encourage “flash mobs” in Venezuela’s ally Cuba under the cover of “development assistance”. White House officials acknowledged that such programmes were not “unique to Cuba”.
Maduro has called a national peace conference – though opposition parties have so far refused to participate, arguing it will be skewed to endorse the government. 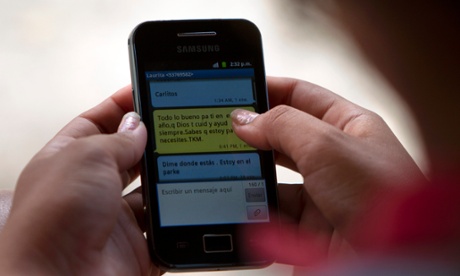 USaid covertly funded a social media website to foment political unrest in Cuba. Photograph: Franklin Reyes/APThe president also says he will agree to Vatican conciliation if the opposition condemns violence. But he rejects criticism that he and the Chavista movement have been too polarising.”I don’t think polarisation in a democracy is something wrong. That seems to be trendy now, to try to turn polarisation into some sort of disease. I wish all democratic societies would polarise. A democracy can only truly function if its society is politicised.””Politics is not only for the elite, for centre-right and centre-left parties, while the elites distribute power and wealth among themselves”, Maduro said. “Venezuela has a positive polarisation because it is a politicised country where the large majority take sides over public policies. There is also negative polarisation that doesn’t accept the other and wants to eliminate the other – we must get over that with national dialogue.”Venezuela has been central to the radical political transformation of Latin America over the past decade, and Maduro insists that regional process will continue. When Chávez said “the 21st century is ours” in 1992, he says “it was a romantic idea. Today it is a reality and no one is going to take it away from us”.
Challenged over whether Venezuela’s 2009 referendum to abolish limits on the number of times presidents can stand for election meant he would like to continue indefinitely, Maduro countered that Venezuela had a right to recall elected officials, unlike in Europe. “In the UK, the prime minister can run as many times as he wants to, but not the royals. Who elected the queen?
“The people will decide until when I can be here. Be certain that if it is not me it will be another revolutionary. What will be indefinite is the popular power of the people”.