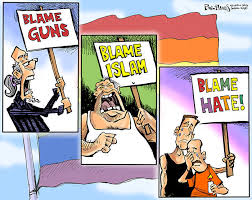 On the 12th of June, 49 people were killed in Pulse, a gay nightclub in Orlando, Florida, by a gunman. This is one of the worst instances of mass killing in US history. The gunman, not counted among the 49, was shot and killed by the police after a long standoff. Over 50 others were grievously wounded.

This chilling incident does not bear mere straightforward condemnation, because it has since laid bare a number of issues that are not only entrenched in the immediate political and social climate in the United States, but because it calls into question the range retrogressive social attitudes and lawmaking the world over.

The gunman was Omar Mateen. The mere name set the media and the political establishment in the US and the world over ablaze with the expected cries of ‘radical Islamic terrorism’. However, close examination of eye-witness and survivor statements after the attack tells a very complex story about the shooter, the person. He was American, born in New York, to Afghan parents, had trained to work as prison guard at a Florida corrections facility, but worked as a security guard with G4S Secure Solutions, had an active firearms license, and no prior criminal record. He had passed the required psychological screening. However, it is now known that his first wife has pointed to repeated instances of domestic violence in the past. It is also said that he was part of gay dating sites, and frequented Pulse. During the shooting, he is reported to have said that he was doing this because he wanted America to stop bombing his country, and in a 911 call, he claimed allegiance to the ISIS. There are obvious contradictions, however, because his allegiance is also to Hezbollah and the al Nusra, which are in direct combat with the ISIS, and to the arms of the state in the US as a trained prison guard, and later as a security worker in a private firm. It is also very obvious that his own sexual identity, as a married man who was possibly also gay, was deeply conflicted, and a contributing factor.

These pixellated details about the person – a complex, confused, disturbed individual committing what has rightly been called an act of self-hatred due to his own conflicted sexual identity – are relevant. It is important to question why his act is being represented as one of ‘radical Islamic terrorism’ by the media and the conservative political establishment not only in the US but also in India, rather than what it really is – a hate crime against the LGBTQ community, enabled by a culture of violent masculinity and militarism in the US.