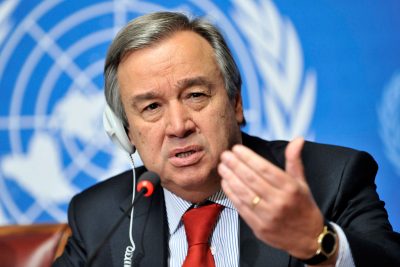 Note to readers: please click the share buttons above
With rare exceptions, UN secretaries general serve US-led Western interests, supporting aggression by failing to denounce it, disgracing the office they hold, breaching UN Charter principles.
Since installed as UN secretary general by Washington in January 2017, former Portuguese prime minister Antonio Guterres said nothing about US-led aggression in Syria or anywhere else.
He failed to denounce US-led terror-bombing, the rape and destruction of Raqqa, Syria and Mosul, Iraq – massacring countless thousands of defenseless civilians, turning both cities to rubble on the phony pretext of combating ISIS Washington created and supports.
He said nothing about US-led destruction of vital infrastructure in Syria, Iraq and elsewhere.
In response to US planned and orchestrated aggression in Yemen, Saudi/UAE terror-bombing doing its dirty work, he issued pathetic statements through his spokesman, calling for transparent investigations into incidents massacring countless numbers of Yemeni civilians – whitewashed every time initiated.
Last April, Saudi/UAE terror-bombing slaughtered over five dozen Yemeni civilians at a wedding party, scores more wounded, an atrocity at what was supposed to be a joyous occasion.
A survivor called what happened “something out of judgement day, corpses and heads scattered, engulfed by fire and ashes.”
Yemenis experienced many “judgment day(s)” since conflict began in March 2015, millions in the country enduring nightmarish conditions.
Following the wedding party atrocity, UN Secretary-General Antonio Guterres failed to denounce it – issuing a pathetic statement through his spokesman alone saying:

“The Secretary-General reminds all parties of their obligations under international humanitarian law concerning the protection of civilians and civilian infrastructure during armed conflicts.”

Instead of condemning Saudi-led US aggression in Yemen, he called the conflict a “stupid war.”
He criticized Syrian forces involved in combatting US-supported terrorists, their right to self-defense, affirmed under Security Council Resolution 2401 and other international law.

He’s been silent about flagrant US/NATO/Israeli/Saudi, UAE violations of SC Res. 2254, calling for ceasefire and diplomatic resolution to years of conflict – Obama’s war, continued endlessly by Trump.
On August 29, a Guterres statement through his spokesman opposed Syrian efforts to liberate Idlib province from US-supported terrorists, saying:

“The Secretary-General urgently appeals to the Government of Syria and all parties to exercise restraint and to prioritize the protection of civilians.”
“He calls on the Astana guarantors (Russia, Iran and Turkey) to step up efforts to find a peaceful solution to the situation in Idlib…”

He said nothing about US-supported terrorists controlling the province, holding hundreds, maybe thousands, of civilians hostage as human shields.
He ignored Russian Foreign Minister Sergey Lavrov, saying al-Nusra and other terrorists in Idlib are “us(ing) this de-escalation zone to prepare attacks on the positions of the Syrian army and even for attempts to attack the Russian military base in Khmeimim using aerial drones.”
He was silent about an impending CW false flag wrongfully blamed on Damascus, used as a pretext for greater US, UK, French terror-bombing of Syrian sites.
He ignored Syrian Foreign Minister Walid al-Muellem, saying al-Qaeda-linked White Helmets kidnapped 44 Idlib children, intending to use them as CW false flag props.
He failed to explain that Damascus eliminated its entire CW stockpile, never used these weapons any time during years of war, successfully liberating areas controlled by US-supported terrorists using conventional weapons alone.
Why would government forces use chemical or other banned weapons now, winning without them, giving Washington and its imperial partners reason to terror-bomb the country?
Guterres has been silent about what’s most important to explain.
On Thursday, Syrian UN envoy Bashar al-Jaafari blasted his unacceptable bias, supporting aggressors in the country instead of denouncing them, saying:

“Here we are talking about our surprise with (Guterres’) statement aligning (his) position (with) those countries targeting my government and my country…and referring to the threats expressed by the delegates of the US, Britain and France.”

Jaafari accused these countries and their imperial partners with waging endless war on the Syrian Arab Republic, opposing restoration of peace and stability to the nation.

“The Syrian government (and) its allies (are) the only part(ies) implementing UN Security Council resolutions pertaining to combating terrorism. Nobody else is fighting ISIS (and other terrorists) in Syria but the Syrian army supported by our allies,” Jaafari stressed.

Former UK ambassador to Syria Peter Ford believes the US, Britain and France intend “fabricat(ing) (a CW) incident,” a pretext for escalating war instead of trying to resolve it.

“The intentions could hardly be made more plain, and almost every day (there’s) new evidence,” he said, suggesting what’s coming – hyped by US and other Western media.

They’re conditioning the public to accept escalated US-led naked aggression in Syria, pretending it’s in response to CW use by its forces, a Big Lie. When repeated enough it’s believed by most people.

“(W)e better brace ourselves,” said Ford. “We better stand by for a crisis much more serious than the Douma crisis unless we raise our voices loud enough.”