Home » Post Page » U.S.-Zio-Nazi War Against Syria Moves To The Next Stage: A Media Coup 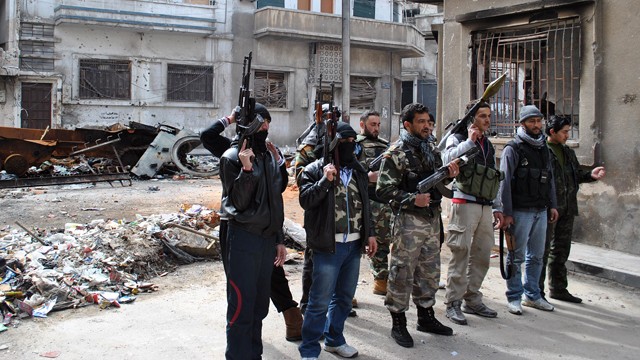 Patriotic Syrians demonstrate in the streets in support of their country, which is under attack from the U.S. and Israel.

The U.S., NATO, Saudi Arabia, and Israel continue to stir up trouble in Syria to get a larger war going in the region. It is now being reported that the Obama administration wants to impose an illegal no-fly zone on Syria. Paul Joseph Watson breaks down this latest development in his article, “Report: Obama Prepares Air Strikes On Syria”:

“The likelihood of military intervention has been brought forward by reports that opposition rebels are planning to use chemical weapons and then blame the atrocity on Assad’s regime.
Rebels attempted to stage a similar ‘false flag’ recently when British Channel 4 reporter Alex Thomson was purposefully led by rebels into a trap whereby it was hoped he would be killed by government troops and his death used as a propaganda stunt.
Hostility towards Syria from the international community has intensified in recent weeks, particularly after the recent massacre in Houla which was blamed on Assad’s forces despite the fact that eyewitnesses in Houla said opposition rebels were responsible for the slaughter, which killed 108 people – mostly women and children.”

In the past year, Syria has seen a massive infusion of arms and terrorists from outside its borders. At the same time, the U.S. has attempted to manipulate world public opinion and exploit the chaos it unleashed in Syria.

Washington’s goal is to build up an international consensus to carry out a larger military operation against the Assad government under the cover of a “humanitarian intervention.” So far, that consensus has been lacking because the case for a military solution is based on total lies and U.S.-Israeli war propaganda, much of which has been repudiated by evidence gathered by independent journalists and eyewitnesses on the ground in Syria.

The cries for a NATO intervention in Syria ring hollow since NATO is the party that is causing the chaos and sponsoring the terrorists who are behind senseless massacres of Syrians. American journalist Stephen Lendman says Syria is a victim of imperialist aggression and that its government has been on Washington’s sights for quite some time. Lendman:

“There is no question this is a Washington-orchestrated war. It is a low-level war to the extent that NATO has not gotten directly involved. But it is exactly what happened in Libya last year. An insurgency began; Washington orchestrated it; insurgents were recruited; they were funded; they were armed; they were US special forces, British special forces, CIA, MI6, Qatari special forces. They are in Syria now; they are directing these massacres, these killings. They are funding, they are training; they are picking targets; they are leading these dead squad games to places like Houla [and] Takiba. They are picking up who to slaughter. They go after pro-Assad loyalists.

You always have to ask, when terrible incidents occur, whether it is car bombings, whether it is massacres of civilians, cui bono, who benefits? Assad gets nothing from this. Only the opposition gains. Assad is the victim. The victim is being blamed for the perpetrator’s crimes. But again make no mistake. The nexus of this struggle emanates from Washington, doesn’t matter whether it is Obama, [former US President] George Bush or anybody else. Syria, and other regional countries, have been targeted for regime change for years, at least a decade. It was only the question when each one would come up. Syria’s turn came up and violence has been raging since early last year.”

Syria’s national independence and social unity are threats to the U.S.-Israeli empire of genocide. The cabal of war criminals in Washington, London, and Tel Aviv are using the sectarian card in Syria to its maximum effect. The CFR and other globalist-imperialist organizations that aim to split Syria along ethnic and religious lines are pushing the false narrative that Syria is in a civil war and innocent Syrians are being massacred by their government. These are lies.

II. A Media Coup In The Making In Syria?

French journalist Thierry Meyssan says NATO is secretly planning a major psyop campaign against Syria with the triple aim of pushing Assad out, emboldening the foreign-backed terrorists in Syria, and weakening the psyche of the Syrian people. Meyssan writes:

“In a few days, perhaps as early as Friday, June 15, at noon, the Syrians wanting to watch their national TV stations will see them replaced on their screens by TV programs created by the CIA. Studio-shot images will show massacres that are blamed on the Syrian Government, people demonstrating, ministers and generals resigning from their posts, President Al-Assad fleeing, the rebels gathering in the big city centers, and a new government installing itself in the presidential palace.

This operation of disinformation, directly managed from Washington by Ben Rhodes, the US deputy national security adviser for strategic communication, aims at demoralizing the Syrians in order to pave the way for a coup d’etat. NATO, discontent about the double veto of Russia and China, will thus succeed in conquering Syria without attacking the country illegally. Whichever judgment you might have formed on the actual events in Syria, a coup d’etat will end all hopes of democratization.”

If NATO’s plan for a media coup is true, then we must do everything in our power to stop this insanity and foolishness before it comes to be executed. Meyssan advises readers to, “circulate this article on the Internet and alert your elected officials.”

We must also apply moral pressure to the corrupt members of the Western “mainstream” media and force them to report the truth for once, or risk being charged as war criminals for their involvement in war propaganda efforts.

Syria is not Libya. Waging an all-out war against Syria is a further step towards World War III. People who support a UN or NATO intervention in Syria are by extension in favour of World War III.

Martin Iqbal says that due to the work of so-called human rights organizations many well-intentioned people in the West have been duped into supporting a criminal and covert agenda for war against Syria. He writes:

“Orwellian ‘human rights’ outfits such as Avaaz have become adept at manipulating well-meaning activists and liberals into supporting the very agenda they purport to oppose – placing them firmly in the same camp as the most virulent Zionists, Neoconservatives, and war hawks one can imagine. This makes the illusory nature of the left-right dichotomy clearer than ever before, but even more worryingly it expedites the march of the NATO-GCC-Israeli war machine that now has Syria in its crosshairs.”

The challenge for true humanitarians and world citizens is to advocate for real solutions that address the real problems plaguing Syria right now. Understanding that Syria is under attack from the criminal leaders of the United States, Israel, and Saudi Arabia is crucial.

And this war goes beyond Syria’s borders. Prof. Michel Chossudovsky writes, “A war on Syria is also a war on Palestine. It would weaken  the resistance movement in the occupied territories. It would reinforce the Netanyahu government’s ambitions to create a “Greater Israel”, initially, through the outright annexation of the Palestinian territories.”

So by waging an illegal war against Syria, the Obama administration is throwing the Palestinians under the bus and destroying any chance of a negotiated settlement between Israel and the Palestinians. Obama is following the Neocon plan down to every last detail.

No one can honestly justify a military solution to a foreign-instigated security crisis in Syria. The U.S. government is going against history, world public opinion, and international law in Syria. Bringing down Assad is not moral or legal. Sponsoring terrorists in Syria and unleashing NATO death squads to terrorize the Syrian people and destabilize the Syrian government is a war crime. Syrians are fighting for their survival.

The international community must get real and hold the leaders of the U.S., Israel, Britain, and Saudi Arabia accountable for their crimes against humanity and crimes against the peace. These are rogue terrorist states run by plutocrats and banksters, not responsible, democratic, and legitimate international actors. They want to destroy Syria, not save it from its current regime.

The only moral response by ordinary citizens around the world to the crisis in Syria is to stand with the Syrian people against the war criminals leading the U.S., NATO, Israel, Saudi Arabia, and their Jihadist terrorists.