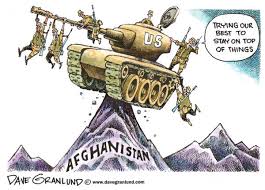 I always found myself giggling during the Democratic debates when Hillary would ask Bernie how he was going to pay for things like healthcare or college tuition, and then Bernie stammering to find an answer.

They both knew the secret but neither would say it — there’s plenty of money, we just don’t want to spend it on Americans.

We think of that as freeloading, unearned stuff. Go get a job, moocher. But then move the same question overseas and everything changes. There is always plenty of money, and the people getting free stuff from that money aren’t moochers. They’re allies.

So how much healthcare would $1.7 billion buy? Because that’s how much money the United States just laid out to buy radios for the near-useless Afghan Army. And while I don’t know how much healthcare the money would buy, I do know it will purchase a helluva lot of radios. Is everyone in Afghanistan getting one? Maybe we’re buying them for the Taliban, too.

Anyway, the $1,700,000,000 radios for Afghanistan contract was just recently awarded to the Harris Corporation. And here’s a funny thing: only one company — Harris — actually put in a bid for the contract.

But the Afghans must need more stuff than just radios, and so the U.S. has money ready for that.

The United States will provide $3 billion to the Afghan National Defense and Security Forces from 2018 to 2020 for, well, we don’t really know. Meanwhile, the U.S. Special Representative for Afghanistan and Pakistan said the White House planned to ask Congress for about $1 billion a year in development and economic assistance for Afghanistan through 2020. And if that isn’t enough, the United States and its allies are expected to raise $15 billion for the Afghan National Defense and Security forces at a NATO summit scheduled for next month in Warsaw.

There’s money. You just can’t have any of it, moochers.