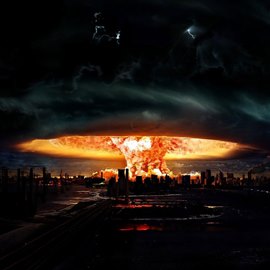 “The unleashed power of the atom has changed everything save human way of thinking and thus we drift toward unparalleled catastrophes.” Albert Einstein 1946
Daniel Ellsberg, former presidential advisor, who has released the famous top-secret Pentagon Papers related to the Viet Nam war[ii], has also possessed a cache of top secret documents related to America’s nuclear program in the 1960s. In this book “The Doomsday Machine: Confessions of a Nuclear War Planner”[iii] (5/12/2017) he reveals the contents of those documents, with their shocking relevance for today. It is an insider’s account of the most dangerous arms buildup in the history of the world, whose legacy threatens the very survival of humanity. Ellsberg’s analysis of recent research on nuclear winter shows that even a small nuclear exchange could expand to cause billions of deaths by global nuclear famine. 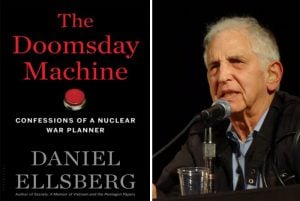 Much of the nuclear research has been done in secrecy in both the west and east blocks. Few insiders with comprehensive knowledge of the consequences of nuclear detonations have revealed these secrets, the most prominent being Daniel Ellsberg. One of the more alarming parts of the book is the a number of people to whom authority is delegated to pull the trigger on nuclear weapons, as stated:

“With respect to deliberate, authorized US strategic attacks, the system has always been designed to be triggered by a far wider range of events than the public has ever imagine… Moreover, the hand authorized to pull the trigger on US nuclear forces has never been exclusively that of the president, nor even his highest military officials”.

This renders the likelihood of a nuclear exchange significantly greater.Russia has a similar protocol, known as the Dead Hand system delegating authority to retaliate to a US strike in the event that the country’s commanders were taken out. Similar delegations likely exist in other nuclear countries. Consequently the triggering of nuclear war is now in the hands of a large number of people.
Since the first atomic test in Alamogordo, Nevada, 6 August 1945, the global powers have undertaken the construction of a global nuclear suicide machine on a scale that defies human contemplation. The desperate urgency of the existence of thousands of launch-on-warning state nuclear weapons has been grossly underestimated, receiving limited focus in the culpable mainstream media, preoccupied as it is with parochial politics, sport and sex scandals.
Sydney Drell, a physicist and nuclear weapons expert[iv], commented on the proximity of a nuclear exchange in the following terms:

“Given all the close calls and mistakes in the 71 years since Hiroshima, he considered it a miracle that no other cities have been destroyed by a nuclear weapon — “it is so far beyond my normal optimism”.

The likelihood of nuclear war has risen due to the Mutual Assured Destruction (MAD) strategy and launch on warning,namely use-them-or–lose them strategies, has decreased human control, rendering N-war possible due to computer errors. The fear of losing nuclear assets has driven launch pads to increased mobility, on submarines, trucks and trains, increasing the likelihood of accidental nuclear war. 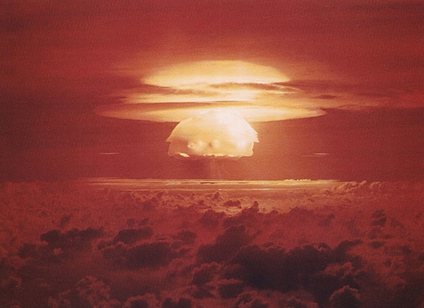 The Castle Bravo hydrogen bomb test, March 1, 1954, Bikini Atoll, Marshall Islands[v]  The most powerful nuclear device detonated, yielding was 15 megatons of TNT, leading to unexpected radioactive contamination of areas to the east of Bikini Atoll. Fallout on residents of Rongelap and Utirik atolls spread around the world. The blast incited international reaction over atmospheric thermonuclear testing.
But the consequences of a nuclear exchange belong to the unthinkable. According to the article titled Nuclear War, Nuclear Winter, and Human Extinction (Starr 2015 – director of the University of Missouri’s Clinical Laboratory Science Program[vi]), apart from the immediate destruction by nuclear explosions[vii]:

An important review of Ellsberg’s book by Scott Ludlam “Nuclear brinkmanship and the doomsday scenario”[viii] states, among other:

“This work isn’t scary in the conventional sense. It is quietly terrifying. No matter how bad you think the global nuclear weapons complex is, it is worse than you know. Much worse Ellsberg knows this because he helped design it” and “Today, at the highest levels, the doomsday machine is renewing itself. Nuclear weapons states have essentially cast aside the 40-year charade that they intend to honor their disarmament obligations under the Nuclear Non Proliferation Treaty (NPT). This legal instrument has come to serve chiefly for enforcement of a kind of global nuclear apartheid where a tiny handful of states maintain the capacity to commit unthinkable destruction while the great majority of the world’s governments forswear against ever adopting the technology.”… “This, then, is the doomsday machine. Not simply the existence of fission weapons or unspeakably destructive hydrogen bombs, but the whole network rigged together: thousands of them on hair-trigger alert, command and control equipment built in the 1970s and ’80s, millions of lines of antique code sitting on reels of magnetic tape or shuffled around on floppy discs even now. An architecture tended by fallible and deeply institutionalized human beings, some of them with bigger buttons than others. A weapons arsenal premised on the fact that it can never be used, threatened with use every day since 1945, and now costing roughly $100 billion a year globally to maintain and upgrade.”

To date the nuclear-armed nations have declined to endorse the Nuclear Ban Treaty[ix] initiated (ICAN) International Campaign to Abolish Nuclear Arms[x].
The future of the world hangs on a thread.