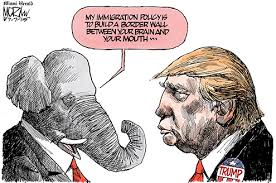 Republican presidential nominee Donald Trump has backtracked from his neutral position on the Israel-Palestine conflict, and is now “committed” to supporting Israeli settlement expansion on territories it has seized illegally, according to an advisor.

David M. Friedman, a real-estate attorney serving as Trump’s main advisor on Israel, said the Republican presidential candidate and reality television star would not support the recognition of the Palestinian state without “the approval of the Israelis.” Friedman also remarked that Trump was unconcerned with the inhabitants of the West Bank, because “nobody really knows how many Palestinians live there.”

Trump made Friedman a part of his campaign staff in April, at a meeting with Orthodox Jews, naming him and Jason Greenblatt, another real-estate lawyer and Trump’s chief attorney, as his advisors on Israel. Friedman said at the time, “Mr. Trump’s confidence is very flattering. My views on Israel are well known, and I would advise him in a manner consistent with those views. America’s geopolitical interests are best served by a strong and secure Israel, with Jerusalem as its undivided capital.” Friedman has made no secret of his feelings about a two-state solution with Palestine, writing that, “It was never a solution, just an illusion that served both the US and the Arabs.”

Trump has earned a reputation for taking contradictory stances on issues, and when asked in May if he thought Israel should cease construction in the West Bank, the candidate said, “No, I don’t think there should be a pause… because I think Israel should have – they really have to keep going. They have to keep moving forward.” Later in the same interview he remarked, “I’d love to negotiate peace. I think that, to me, is the all-time negotiation… I would love to see if peace could be negotiated. A lot of people say that’s not a deal that’s possible. But I mean lasting peace, not a peace that lasts for two weeks and they start launching missiles again. So we’ll see what happens.”

Friedman says Trump’s attitude toward Israel is positive, and his view on the Palestinian state springs, in part, to a lack of power on the part of Palestinian President Mahmoud Abbas. “His [Trump’s] feeling about Israel,” Freidman said, “is that it is a robust democracy. He does not think it is an American imperative for [Gaza Strip and other territories seized by Israel] to be an independent Palestinian state.”

When asked directly about his own feelings on recognizing the State of Palestine, Friedman was open, if tentative.

“If the Israelis conclude that they need to do this [recognize the Palestinian state] in order to enhance their long-term security – which I think we are very skeptical about – but if this is what they conclude they want to do, we will respect this decision…. If the circumstances change… and there is a reason to be optimistic, then great, but the current facts don’t make that [recognizing the Palestinian state] an American imperative at all.” he said.