Critics say this “detailed account” of the CIA director’s role “in horrendous acts of torture” further confirms “that she is totally unfit to lead the agency.”
by: Jessica Corbett

President Donald Trump’s nominee to run the Central Intelligence Agency (CIA), Gina Haspel, was confirmed by the Senate in May despite concerns about her role in the agency’s torture program. (Photo: CIA / with overlay)
Government cablesreported in the New York Times on Friday “read like torture journaling,” critics said after reviewing the “loud noise, sleep deprivation, forced nudity, wall-slamming, and waterboarding” that CIA interrogators used on an al-Qaida suspect in 2002 at a secret prison run by Gina Haspel, whom the Senate confirmed as agency chief in May despite widespread outrage over her torturous record.
View image on Twitter 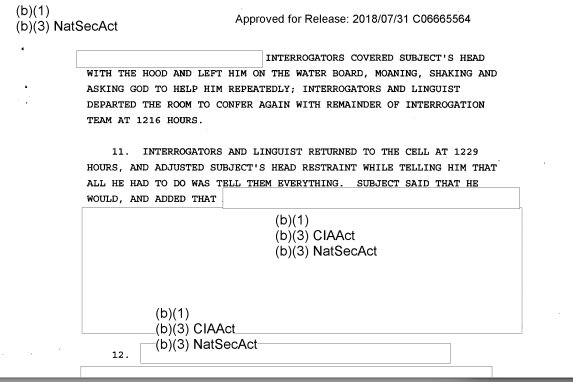 Gina Haspel ran the secret CIA prison in Thailand in 2002. Her secret cables from there read like #torture journaling…

Tom Blanton, director of the National Security Archive at George Washington University—which obtained the 11 top secret cables through a Freedom of Information Act (FOIA) lawsuit—explained that as chief of the base at the CIA black site, Haspel would have either written or authorized the cables that outline how the CIA tortured Abd al-Rahim al-Nashiri, who remains imprisoned at Guantánamo Bay in Cuba.
Nashiri’s former attorney Richard Kammen—who quit amid allegations that the U.S. government was spying on the defense team’s private meetings with the prisoner—told the Times he hopes the full truth about how agents interrogated Nashiri is revealed before his trial, because “ultimately, the public will be horrified by the level of brutality employed by the CIA.”
While human rights advocates vocally protested President Donald Trump’s appointment of Haspel to run the CIA earlier this year—as well as the “robust” public relations campaign which some said amounted to “domestic propaganda” ahead of her confirmation—they pointed to these newly released cables as further evidence “that she is totally unfit to lead the agency.”
Iain Levine

Detailed account of involvement of Gina Haspel, CIA director, in horrendous acts of torture, confirming that she is totally unfit to lead the agency https://nyti.ms/2Oq0ZqL?smid=nytcore-ios-share … pic.twitter.com/td6E7jm0xt

Detailing the CIA’s treatment of Nashiri—which “produced little or no new intelligence about existing plots or imminent attacks,” further invalidating claims by the agency and Trump that “torture works“—the Times reported:

In one early interrogation, outlined in the new documents, Mr. Nashiri had his clothes ripped off him and “whimpered that he would do anything interrogators wanted.” The interrogators told him that “if he refused to cooperate, he would suffer in ways he never thought possible.” They then shaved Mr. Nashiri’s head while he wailed and moaned.
[…]

At times, the interrogators called Mr. Nashiri names—”a little girl,” “a spoiled little rich Saudi,” a “sissy”—and threatened to turn him over to “other people” who, they said, “would certainly kill him,” one cable said. Pointing to the black-clad team that carried out the torture, they told Mr. Nashiri that its members had volunteered for the job after hearing he was responsible for the bombing of [a Navy destroyer, the USS] Cole and “had something to avenge.”

In the late November session, after Mr. Nashiri was waterboarded several times, the interrogators said they were willing to deliver the same treatment for months until he cooperated. When they were finished, Mr. Nashiri crawled into “the small box” in which he was confined.

Some Haspel critics responded by calling out the six Democrats—Sens. Mark Warner (Va.), Bill Nelson (Fla.), Jeanne Shaheen (N.H.), Heidi Heitkamp (N.D.), Joe Manchin (W.Va.), and Joe Donnelly (Ind.)—who joined with nearly all of the Senate’s Republicans to confirm Haspel.
Others highlighted the issue that Haspel, as the CIA’s acting director, had final say over what was released during her confirmation process—the National Security Archive’s request to obtain the secret cables before the Senate’s vote was denied—and emphasized that while it is now “too late” to block her nomination, senators should wait for “all relevant documents” before voting on Trump’s highly contested U.S. Supreme Court nominee, Brett Kavanaugh.