Outgoing UN Special Rapporteur Michael Lynk on how Israel is practicing apartheid, and the steps the international community can take to force Israel to abandon its “fever-dream of settler-colonialism.” 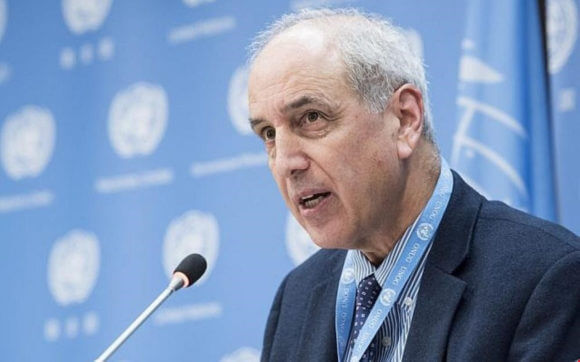 For those who keep track, a new chapter has opened in the chronicling of Israeli Apartheid.

The idea that Israel is guilty of this gravest of crimes is now officially published at the website of the Office of the UN High Commissioner on Human Rights, set forth in a flurry of reports and statements authored by Canadian human rights lawyer Michael Lynk in the closing days of his six-year tenure as ‘Special Rapporteur on the situation of Human Rights in the Palestinian territories occupied since 1967’.

Professor Lynk stepped down from his post on May 1, succeeded by Italian academic Francesca Albanese. His reports, and those of two powerful UN committees now at work, will be harder for the international community to ignore or dismiss than the findings of NGOs like B’Tselem, Human Rights Watch and Amnesty International.

In his six years as Special Rapporteur, Michael Lynk never minced his words, but he knew how to keep his powder dry until the last moment, with a salvo not even the New York Times could ignore.

“In the Palestinian territory that Israel has occupied since 1967,” Lynk wrote in his final report to the 49th session of the Human Rights Council (HRC), now available for all to read and ponder at the UN website, “there are now five million stateless Palestinians living without rights, in an acute state of subjugation, and with no path to self-determination.”

“[An] institutionalized regime of systematic racial oppression and discrimination has been established,” Lynk told the HRC. “Israeli Jews and Palestinian Arabs live their lives under a single regime which differentiates its distribution of rights and benefits [on] the basis of national and ethnic identity, and which ensures the supremacy of one group over, and to the detriment of, the other … This is apartheid.”

Lynk reaffirmed the Israeli apartheid idea in an April 22 statement now posted at the UN website: Israel’s “entrenched occupation, which has become indistinguishable from practices of apartheid, is based on the institutional discrimination of one racial-national-ethnic group over another,” the statement read.

In a subsequent statement published by the HRC on April 27, Lynk and four other Special Rapporteurs reiterated the Israeli apartheid idea, in a statement condemning Israeli housing policies in East Jerusalem, which they said “clearly amounts to segregation on the basis of race, colour, descent or national or ethnic origin.”

Michael Lynk described the process that led to his apartheid declarations in an extended conversation with Mondoweiss.

“I was appointed six years ago and I said to myself, I don’t need to talk about apartheid, you know. There is plenty of room within the framework of international humanitarian law … to be able to persuade diplomatic and political decision makers who pay attention to the Israeli-Palestinian conflict of what they have to do in order to be able to end the occupation. And to realize the promise of Palestinian self-determination. If I start talking about apartheid, I’m going to drive them away, and I’m not going to have any influence at all with respect to decisions made primarily by European and North American policymakers.”

But, over the years, Lynk realized Israel’s presence had morphed from ‘belligerent occupation’ – legal under international law, within bounds set forth in the Fourth Geneva Convention of 1949 – to de facto annexation and apartheid.

“In 2014, when the peace plan or the Kerry peace plan collapsed, there were around 370,000 Israeli settlers in the West Bank alone,” Lynk told Mondoweiss. “Now, eight years later, there are 480,000 settlers in the West Bank. There’s over 700,000 settlers altogether. When you’re increasing the settler population by between twenty to twenty-five thousand settlers per year, who cannot do their math and realize that means no Palestinian state? That means a permanent occupation which has become indistinguishable, as I argued in my last report, from apartheid.”

Under Geneva IV, occupations are understood to be temporary, and occupying powers are obliged to safeguard the interests of the “protected people” living under their rule. Attempts to annex occupied territory – by transferring their own citizens into occupied territory, for example – are strictly forbidden.

“The American occupation of Japan was around ten years, and then it ended,” Lynk told Mondoweiss. “The Western allies’ occupation of Western Germany was around ten years. Even the American occupation of Iraq after 2003 was in the range of 9 to 10 years … Anything over that, particularly if the occupying power is showing acquisitive traits, to want to retain some or all of the territory, is profoundly illegal under international law … So, there is a huge difference, a huge amount of daylight between what an occupation should be looking like — temporary, short term — and what the Israeli occupation is — permanent, forever, indefinite.”

Basing himself on the 1973 International Convention on the Suppression and Punishment of the Crime of Apartheid, and the 1998 Rome Statute of the International Criminal Court – the only conventions where apartheid is actually defined – Lynk applied a “three-part test” to the apartheid question.

Lynk’s second question: Had Israel established this system “with the intent to maintain the domination of one racial group over another”? Yes, he concluded.

“All you really have to do is start reading what Israeli political leaders have said,” Lynk told Mondoweiss. “Naftali Bennett, the current prime minister of Israel, says, I oppose a Palestinian state and I oppose any attempt to restart a peace process … We apply Israeli law to Judea and Samaria. Benjamin Netanyahu said, you know, a Palestinian state will endanger our existence. I’m not going to divide Jerusalem. I will not evacuate any settlement. And I’ll make sure we control the territory west of the Jordan River.”

Having answered yes to the first two questions, Lynk advanced to the third: Did Israel’s system involve “inhumane acts” designed to enforce its system? Lynk tallied them in his final report to the UN: “state-sanctioned extra-judicial killings,” the incarceration of thousands of Palestinians without due process, collective punishment, home demolitions and the blockade of Gaza, which Lynk describes as “medieval.”

Then there’s settler violence, openly aided and abetted by Israeli soldiers, some of whom are settlers themselves.

“Palestinian lives are meant to be as miserable as possible,” Lynk told Mondoweiss.

Notwithstanding the mountain of evidence that Israel’s occupation is here to stay and has morphed into apartheid (Israel’s occupation is “by far the best documented conflict in the modern world,” Lynk told Mondoweiss), the international community shows no indication it will hold Israel accountable.

“This is probably one of the great mysteries of the modern world as to why we know so much about the occupation, and we’ve proclaimed so much law with respect to the occupation, but have done so precious little with regards to this. There is a huge gap between promise and performance regarding this occupation.”

Lynk’s frustration as outgoing Special Rapporteur is palpable, but he’s not without hope. In his final report to the UN, and his April 22 statement, he proposes measures to jolt Israel out of its “fever-dream of settler-colonialism,” de facto annexation and apartheid.

The international community should direct Israel to end its blockade of Gaza, cease all settlement activities, and remove all checkpoints, permit restrictions and other measures that hinder Palestinian freedom of movement, Lynk says.

Lynk wants the UN to revive its Special Committee Against Apartheid, dormant since 1994, tasking it to investigate situations of apartheid anywhere in the world.

He recommends that the Israeli apartheid question be addressed by the International Criminal Court, and that an Advisory Opinion be solicited from the International Court of Justice on the legality of Israel’s occupation – something the ICJ did not opine on in its 2004 Wall decision.

Lynk also wants the international community to facilitate Palestinian elections, and is calling for the adoption of a “rights-based peace process” aimed at ending Israel’s occupation and fulfilling the Palestinian people’s right to self-determination.

“Under the Madrid-Oslo process, under the realpolitik process, the Palestinians have to negotiate over how many settlements Israel is allowed to keep. And that’s always going to favor Israel because they have such overwhelming dominance economically, politically, diplomatically and on the ground,” Lynk told Mondoweiss.

“But if you base it on a rights-based approach, all of the settlements are illegal and Palestinians don’t have to negotiate over how many settlements they’re going to have to wind up swallowing in any final peace agreement. The border is going to be the 1967 border. Israel has to negotiate to share Jerusalem as opposed to continually declaring that Jerusalem is not an issue on the table and they own all of Jerusalem. That’s what a rights-based approach winds up meaning if there’s to be any hope at all that there is the possibility of a two-state solution, which seems rather dim at these times.”

Dim indeed. Lynk’s own country, Canada (which opposed his appointment as Special Rapporteur back in 2016), publicly acknowledges that Israel’s settlement enterprise is illegal, not to mention an obstacle to the ‘two-state solution’ it claims to support. Still, Ottawa gladly extends preferential tariff treatment to settlement products, and charitable status to pro-settlement Canadian groups.

In the end, says Lynk, governments will only act under pressure.

“I think the difference is going to be the ability of civil society in European countries and in North American countries to push their governments to be able to take a much stronger stance with respect to the entrenched occupation,” Lynk told Mondoweiss.

Next steps at the UN

Michael Lynk’s successor as Special Rapporteur on occupied Palestine, Francesca Albanese (the first woman appointed to the post) may have better luck. Like Lynk, six years ago, Albanese’s appointment has been condemned by pro-Israeli apartheid lobbyists — here and here.

I told i24News that we haven’t yet heard the U.S. government condemn the UNHRC’s grotesque appointment of Francesca Albanese—a notorious apologist for Hamas terrorism who repeatedly engages in Holocaust inversion—and we are calling on @USAmbUN @LindaT_G to do so.

#Israel slams the choice of Francesca Albanese to head a UN investigation into Israel’s treatment of the #Palestinians: ‘This is a complete farce and underscores the subversion of the Human Rights Council for propaganda,’ @HillelNeuer says.

One thing is certain: Israel will ban Francesca Albanese, as it has all Special Rapporteurs since Richard Falk took up the post in 2008.

Israel can block UN Special Rapporteurs from entering what Michael Lynk refers to as an “internal colony.” It can’t block their reports from being published at the UN website.

These, in turn, will be read by other UN investigators. The Independent International Commission of Inquiry, chaired by South African Navi Pillay (also barred from entering Israel) will report to the Human Rights Council this coming June, and to the UN General Assembly in September. The Commission of Inquiry has been asked to come up with measures “to ensure respect for international humanitarian law and international human rights law,” with a view to “avoiding and ending impunity and ensuring legal accountability, including individual criminal and command responsibility.”

Then there’s the UN Committee on the Elimination of Racial Discrimination (CERD), that’s been addressing Palestinian complaints of racial segregation and apartheid since 2018. CERD’s ‘Conciliation Commission’ is now assessing these charges, without Israeli cooperation. Its work complete, CERD will present its findings to the UN General Assembly.

Cognizant of Michael Lynk’s reports, plastered all over the UN Human Rights website, CERD and Navi Pillay’s Commission of Inquiry may well concur that Israel practices the “crime of apartheid.” If they do, yet another chapter may well open up in the Israeli Apartheid Chronicles – fully fledged investigations by the ICC and ICJ, in The Hague.