Home » Post Page » There is a Ferguson Near You 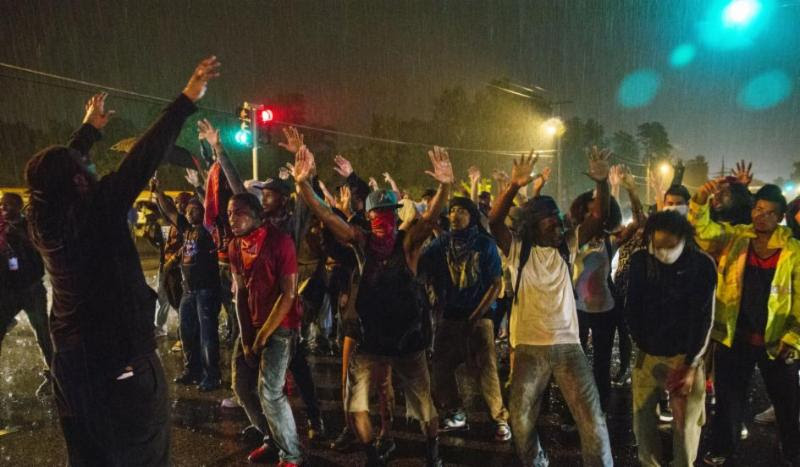 There is a Ferguson near you. Many pundits are saying that the shooting of Michael Brown in Ferguson, Mo., has revealed troubling racial tensions in America. But the real scandal in Michael Brown’s shooting is that it reveals what we’ve already known.

As conservative Republican Senator Rand Paul wrote about Ferguson: “Anyone who thinks race does not skew the application of criminal justice in this country … is just not paying attention.”

Ferguson is a suburb of St Louis that is two-thirds African American. Its 53-person police force has only three African Americans. Its mayor and five of six of its city council members are white. Its seven member all-white school board has just closed the school that Michael Brown graduated from.

Imagine if that had been your son.

The reaction of the police in Ferguson to demonstrators looked like a military, not a police response. Police are trained to use the least force necessary. The county police in Ferguson acted like an occupying military force, responding to a threat by hitting hard and escalating, firing tear gas at residents standing on their own lawns. Police carry identity and name badges so residents can know them. Ferguson’s force was decked out in camouflage as if it were facing not outraged citizens, but foreign guerrillas.

The excesses in Ferguson aren’t unique. Across this country, the Department of Homeland Security and the Pentagon have been providing military type weapons ­— tanks, artillery, mortars, tear gas — and arming SWAT teams in local police forces.

No one should condone violence, whether by the police or the people. But everyone must understand the rage expressed by the residents of Ferguson. Whole sections of our cities and suburbs are like kindling, needing only a spark to flame up.

The urban middle class in this country has been under economic assault. In Ferguson, a middle class suburb, the poverty level now is at 22 percent. Homeowners have been victimized by bankers peddling fraudulent loans. Good jobs are scarce. African American unemployment remains about twice that of whites; for the young it is even higher. Their schools are underfunded. They lack affordable day care, decent public transport, adequate training and educational opportunity.

When people see no way out, then an unrepresentative, discriminatory, heavily armed police force only adds to the alienation.

Ferguson should lead to a review of police hiring, arming and procedures across the country. But that alone is not enough. We need a new urban initiative, a renewed focus on the poor. We need a plan for jobs, decent schools, and affordable public transport. For decades, we’ve chosen to lock people up rather than lift them up, to build first-class jails and second-class schools. Michael Brown was a victim of that reality. The people of Ferguson have every reason to be outraged. And there is a Ferguson near you.