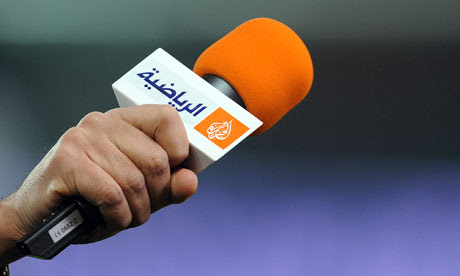 The French Revolution, according to Albert Camus, produced no artists but did give birth to two cultural notables.  In fact, he goes so far as to say that they were the only notables: a gifted journalist by the name of Camille Desmoulins; and the under-the-counter-writer, the Marquis de Sade. The only poet, he stressed, was the guillotine.  How disturbingly fitting then, that Desmoulins found himself the subject of the guillotine alongside Georges Danton in 1794, the victim of false charges.  The word, like a cruel joke, did eventually kill him.

Desmoulins’ fate, while more dramatic and bloody than that of Peter Dreste and his two colleagues from Al Jazeera, Mohamed Fahmy and Baher Mohamed, do share a common thread. The convictions in an Egyptian court took place in a legal setting, seven years for Greste and Fahmy, and ten for Mohamed, but the law never operates in an objective vacuum of sterile applications.  However fine a legal system might be, it is never air tight to manipulations or the convictions of its officers.

The Revolutionary Tribunal which dispatched Desmoulins to the guillotine was moved in various ways that courts in a state of flux tend to behave – political rationales do play a role.  Accepted narratives can’t be disrupted.  The Egyptian legal system has been placed under enormous stress and demand by those wishing to quash the Muslim Brotherhood.  Mass convictions have been meted out in grandiose fashion. The Al Jazeera journalists were caught up in the whirlwind. Faulty evidence was compiled.  A conviction was desired.

Greste and his colleagues found himself in a political melee, a vendetta of long standing between the Egyptian authorities and Al Jazeera. The latter, a state-backed outlet located in Qatar, has been flattered with Islamist credentials, a beaming light into Egypt illuminating a fundamentalist threat.  Given the systematic campaign to stomp out dissent against anti-Muslim Brotherhood line, the broadcaster has become the poster boy of the Egyptian government’s demonology. When one is crafting the credo of a state, enemies tend to be in high demand.

As the prosecution emphasised in its submission to the bench, the relationship between Al Jazeera and the Muslim Brotherhood was tantamount to an alliance with Satan. The reporting of the three journalists had been, in the words of prosecuting counsel, designed to inflict harm on the Egyptian state, though no evidence was adduced to back the assertion.  Over the last few years, Al Jazeera’s offices have been raided, notably those of its Mubasher Misr Arabic language channel, its employees detained and arrested.  Some, such as cameraman Mohammad Farhat, was hospitalised for two months after being beaten by Baltagiya gangs in June 2013, said to be loyal to the regime.

Adding to this has been the detention since July 2013 of some 16,000 individuals on political grounds.  The most high-level detainee is ex-President Mohamed Morsi himself, and members of his executive staff (Al Jazeera, Jun 24).

The diplomats are getting busy, much of it a pretext of trying to soften the stance.  The newly elected President Abdul Fattah al-Sisi has made it clear, as is the formality in such situations, that he will not disturb the judicial verdicts.  As he is entitled to say, other countries should have little say over what happens in the judicial deliberations within his own country.  Questionable decisions of Australian courts, for instance, are seen as immune from executive tampering – to suggest otherwise would aggrieve the cult of common lawyers and law makers who see the Westminster system as divine in its reason and realisation.

Other approaches towards the verdicts are more aggressive, such as those of the former Australian Defence Minister, Peter Reith.   They are also inconsistent and occasionally veer into facile presumption.  Using the argot of the good old mate, which is the warning sign of imminent insincerity, Reith suggested that Australia “not just sit pat in the face of the gross injustice meted out to our mate Peter Greste” (Sydney Morning Herald, June 25).

Reith, who was very much against the school of the sniffing, enterprising journalist while in politics during the Howard years (one just has to look at this record on asylum seekers) has turned full circle, seeing Egypt with a “pretend judiciary”, “a very nasty totalitarian police state” which should not be visited by Australians.

With a degree of ridiculous pop activism, Reith reminds Australians what they did in protest against the restarting of nuclear testing by the French at Mururoa Atoll.  In political rejection, they stayed away in droves from the stunning vineyards, the aromatic Cognac, the left bank of Paris. That no reliable estimate exists on this should itself be a warning.

There is, in such attacks, an underlying assumption of judicial and legal supremacy.  Vital to this is the under emphasised idea that appeal processes have yet to be exhausted.  The doors to appeal have not been shut.  The fire of hope still flickers, resisting extinguishment.

The most dangerous reality of the imprisonments does not lie in their politicisation.  Such tragedies tend to implode into musical hall farce.  Those in prison become useful alibis for the righteous and the indignant.  The issue is to emphasise the dangers, and necessary protections, for those engaged in writing the valued word, and spreading the message that exposes political abuse.

It is appropriate to note that countries such as the UK, the US and Australia were hardly friends of Al Jazeera during the illegal invasion of Iraq.  In January 2006, two British Labour MPs defied the Official Secrets Act to reveal the transcript of a meeting between Prime Minister Tony Blair and President George W. Bush which took place in April 2004.  One of the items on the agenda is worth noting, namely Bush’s proposed military action against Al Jazeera’s headquarters in Qatar. That it even went that far is an indication of what the Qatari station has achieved during its period of broadcast.

Nations cannot be defamed.  They cannot be hurt, wounded or slandered by well directed sentences.  As Brendan Behan noted with acuteness, the first thing the writer and recorder of life should do is let down one’s country.  The outcome of any directed flattery is bound to be sycophancy.  Worst of all, it is bound to lead to an unreliable record of a state’s faults.