Home » Post Page » The Start of Homelessness in Cyprus

Revolution of the Mind Series 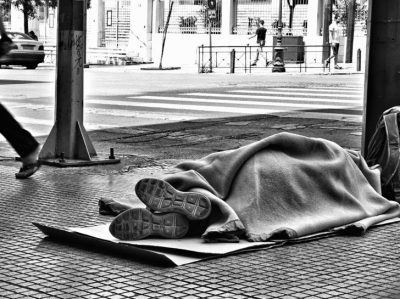 A Rachman-style landlord has decided to make homeless and evict over 100 of his tenants during the week of last Christmas from his rundown apartment building located in Nicosia. He has given the occupants eight-days notice to vacate the premises and turned off the electricity and water supply as a way of intimidation. Yet, no authority or the police intervened; at least, not until the state television exposed the plight of the distraught tenants!
Exposing the quandary of the tenants with no place to go but the streets has outraged the nation. The public was mortified that such practices by some landlords and often pillars of the community is condoned in Cyprus.
Shamefully, the local authorities seem to turn a blind eye to such anti-social behaviour; it appears as if citizens of poorer standing can be discarded at will with no recourse! This is not an isolated case and the government is responsible for the new frenzy in rental behaviour at the expense of those less fortunate citizens of society.
As of April 21 of this year, rent controls are being abolished and a “free market for all” replaces social responsibility! Capitalizing on the forthcoming law, some landlords are evicting tenants from their homes so they can demand higher rents plus 8% annual rent increase and as much as 6-months security deposit instead of the customary two months!
With the arrival of AirBnB, rents have in fact skyrocketed and for private investors this is a golden opportunity to capitalize on their investment. Meanwhile tenants are priced out of their homes and neighbourhoods.
A rental epidemic is now in process and property-owners started converting basements, storerooms and garages as flats or rooms for AirBnB rentals. Meanwhile, well-connected companies fortified by the new law have set out to purchase bank foreclosures and home repossessions at bargain prices for conversion.
The shortage of affordable accommodation has certainly created a serious problem for people that rely on rentals but also for students and young working couples. In fact, the failure to invest in affordable housing is the reason why a wider gap exists in Cyprus today between “the haves” and the “have-nots” than any other time before.
Under the current policy change and the government’s political attitude, it is only a matter of time before the nation is faced with a greater public problem on it hands: homelessness!
Refugee/Asylum Seekers
If that was not bad enough, the rising tide of illegal migrants has now added to the looming problem of homeless people! The influx of refugees can be claimed as a social time bomb that has caught the Cyprus government napping!
Under EU regulations, Cyprus is obliged to provide support and shelter to all refugees or asylum seekers entering the Republic. Instead of learning from the “refugee/asylum” experience of Greece and the demographic impact it has on society and local way of life, the government has failed to foresee the burgeoning risks of refugees landing on its shores or sneaking across the buffer zone.

As a result of its complacency, the EU and UNHCR have criticized the government for not doing enough to provide accommodation and assistance to migrants. Oddly enough, eight out of ten new arrivals are mostly young men that have paid smugglers as much as €2.000 to enter their newly-discovered destination of the Republic in the hope of getting on the EU gravy train.
Last year 4.500 people landed in Cyprus to join the hundreds of others seeking international protection. The island is now considered a honey trap and a hub of activity for traffickers transporting human cargo via the occupied area or on rickety boats from Turkey to be abandoned at the mercy of the sea and rescued by the Republic’s coastguard. Most end up in Pomos and Latchi marinas to be transferred into receiving centres for processing.
The current conditions, however, pose a major problem for the authorities; not enough centres are available to accommodate the flow of newcomers! With a backlog of more than 8,000 asylum claims, the situation is aggravated by the fact that – for obvious reasons – the main Kofinou Reception Centre no longer accepts single males.
The shortage of accommodation coupled with a monthly €100 per person rent-allowance leaves asylum/refugee recipients below the poverty line. Those that slip through the net end up sleeping rough or become easy targets for exploitation in a cycle of perpetual destitution in the land of milk and honey.
Homelessness for Cypriots
Since the government’s election win in March 2013 and EU-Troika’s Bail-in robbery (emptying people’s bank accounts without consent) the new government carved out a new course for Cyprus; neo-liberalism! This calls for the privatization of national industries by also trusting the forces of a market-economy to drive the nation forward!
Unfortunately, when private corporations are in control and driven by greed at the top, there is little hope for those at the bottom!
True to its dogma, the Cyprus government did exactly what other nations have tried and regretted it; the break up of national industries and their sale to private corporate investors on the cheap!
In its wisdom, it also sanctioned mega projects aimed specifically to cater for an elite sector in society and plutocracy; projects such as tower blocks of high-class apartments selling at €1.5 million and as much as €4.0 million per unit. It relaxed zoning laws allowing the development of commercial/residential restricted projects on the seafront; introduced the opening of casinos but most importantly; the selling of golden passports!
The intergovernmental organization OECD (Organisation for Economic Co-operation and Development) has put Cyprus on its blacklist for exposing the EU to “the corrupt and the criminal” by offering residency permits to rich non-nationals without strict screening process or transparency. Subsequently, it produced a damning report stating that: “Cyprus passports-for-citizenship salescheme, is the most prolific of its kind in Europe, with 3.300 foreign nationals having secured EU passports since 2013, earning the country some €5.0 bn.”
As often, none of those earnings and EU-Troika loans including the Bail-in cash amounting to billions of euros trickled down to the population or the infrastructure. Instead, billions have been syphoned off to bail out corrupt banks and to maintain a plutocratic system and status quo.
The scarcity of affordable housing and lettings plays a critical role in any society and yet successive governments never did encourage programmes to build new stocks of subsidized housing for citizens but rather relied on private developers to fill the gap – they never did; and why should they without financial incentives?
In fact, governments have been in denial to recognize that a housing problem exists in Cyprus but the Interior Minister recently broke ranks and has acknowledged that: “homeless people really do exist in Cyprus”.
But the greatest cause of homeless people in Cyprus is yet to come; the evictions and mass repossession of homes by the banks and third party associates!
The Parliament (Vouli) passed a Bill last year allowing banks –for the first time – to apply a fast-track repossession of homes. To “legitimize” the seizure of properties, the government has licensed a number of auction houses (bailiffs) to handle the evictions. In the absence of a safety net homeowners can now find themselves in the streets without the full protection of the law.
The banks did not waste time and began issuing “repossession” letters to thousands of “non-performing” and trapped householders. Under strict instructions by the European Central Bank (ECB) and Troika they embarked to unload their toxic loans and mortgages to foreign hedge funds on the cheap!
Yet, MPs failed to insist that banks offer the same terms to those homeowners in trouble and save themselves from eviction! That was never part of the Troika scheme and recently, under the eyes of the news cameras a woman in Limassol with her three children were evicted from their house and made homeless!
That’s what neo-liberalism is all about – the survival of the fittest! Without a strong and caring social-conscious policy in place, it’s the start of Homelessness in Cyprus!