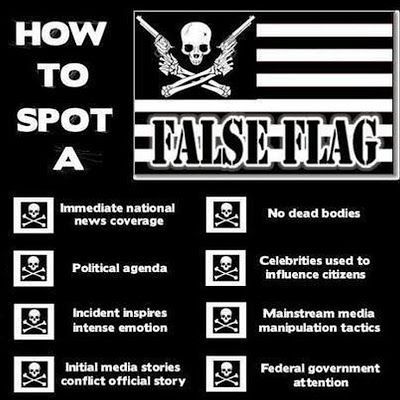 IT HAPPENED ON DECEMBER 2

PAWNS IN A DEADLY GAME

An eye witness said she saw three white guys with big athletic builds do the shooting at San Bernardino.

How did that turn into two small-framed, dark skinned people, one of whom was a 90 pound woman?
“An unidentified source told an NPR journalist that witnesses appeared to recognize Farook by his voice and build.”
That’s all the evidence that exists against the couple who was blamed for the attack.
Let’s break this down…
An unidentified source (in other words nobody)…told NPR (a well known “war on terror” propaganda front)…that witnesses (other people, not the person making the claim!)…appeared to recognize…(appeared to recognize!)…Farook by his voice and build (While he was shooting them? Really?)
In other words, the evidence is total bullshit.
What is not bullshit, is that this couple was found HANDCUFFED in a rented car shot to death.
That’s how they were found.
Then the police opened their apartment and left without locking the door and putting up crime tape and the press went in and ruined the integrity of any evidence that might have been there.
To put the icing on the cake, a Facebook account emerged not connected with Tashfeen Malik and now that is the evidence of her “pledging allegiance” to ISIS before the shooting, a group she had no contact with whatsoever.
It’s hard to prove their innocence when they were so thoroughly framed by the FBI and the media.