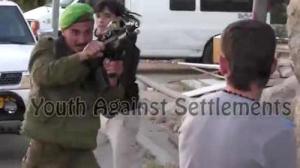 By Uri Avnery
Just before Israel’s 66th anniversary, the country acquired a new national hero.
If it is true that every nation gets the national heroes it deserves, it was a rather worrying spectacle.
The video clip that turned David Adamov from an anonymous soldier into a national figure was taken with a Palestinian camera in Hebron.
Such video cameras have become the bane of the Israeli army. They have been widely distributed to young Palestinians throughout the occupied territories by Israeli peace organizations, especially B’Tselem.

The clip starts with the scene in Hebron. In the middle of Shuhada street stands a solitary soldier with a green beret and a rifle. He looks like any soldier, with the short beard now in vogue among Israeli youngsters.

Some kind of discussion develops between the soldier and elderly Palestinians in the street. But the camera turns to a Palestinian teenager, unarmed, who approaches the soldier, pushing his face very close to him and touching his shoulder with his hand.
The soldier reacts angrily, swinging his rifle. At this moment, another teenager enters the frame and passes the soldier from behind.
The soldier, obviously feeling threatened, swings around and cocks his rifle, ready to shoot. Threatening both teenagers, he tries to kick one, all the time uttering a stream of foul language. Then he notices the photographer, orders him to to stop filming and curses his mother in the most vulgar terms. End.
This clip was shown that evening on all three main Israeli TV channels.
For those of us who know the reality in the West Bank, there was nothing special about it. Scenes like this happen all the time. If the soldier does not kill anyone, it’s just routine. If he does kill, the army announces that an investigation has been opened. Generally, that is the last anyone hears of it.
What was special is that the whole scene was photographed and broadcast. Army orders forbid soldiers to behave like this when photographers are present, and especially to threaten the cameramen. Painful experience has taught the army that such clips, if broadcast abroad, can seriously undermine Israeli propaganda (officially called “explaining” or hasbara).
Even more unusual was the announcement of the army spokesman that same evening, that the soldier had been judged by his superiors and sent to army prison for 28 days.

All hell broke loose. The social media sprang into action. Hundreds, then thousands, then tens of thousands of soldiers declared their solidarity with the soldier who became known as “David Nahlawi”.
(“Nahal” is an army unit founded originally by David Ben-Gurion to further his idea of combining army service with “pioneering” agricultural work. Hence the green beret. The idea is as dead as Ben-Gurion himself, and the unit is now an ordinary infantry brigade. The ending “awi” is Arabic adopted by Hebrew slang.)
Many soldiers, including officers, flooded the internet with photos of themselves hiding their faces behind self-made signs saying “I am David Nahlawi”. Some did not even bother to hide their faces.
After 24 hours the number of pro-David “likes” [on a Facebook page] passed a hundred thousand, most of them posted by soldiers. It was the first military mass rebellion in the annals of the Israeli army. In some armies, it would be called a mutiny, punishable by death.
Faced by a totally new situation, for which it was quite unprepared, the army lost control. It published a statement coming close to an apology.
The army spokesman, it appeared, had been mistaken. David was not sentenced to prison for threatening to kill Palestinians (perish the thought!), but for something that happened a few hours before the incident: David had beaten up his direct commander and another soldier. The Hebron incident had not yet been investigated, and therefore David had not yet been judged for it.
There was another correction. In the first day after the clip was shown, the news spread that one of the Palestinian youths had been carrying a knuckle-duster, a clear proof of his aggressive intention and of the danger the soldier found himself in. Then the media carried a correction: an analysis of the clip showed that there was no knuckle-duster or any other weapon. It was just a string of Muslim prayer-beads.

The incident raises a number of questions, each more serious than the other.
The first and obvious one: why did the army send a lone soldier to guard a street crossing in the middle of Hebron on his own, a town where supreme tension rules even on the quietest of days?
Hebron is clustered around the “Tombs of the Patriarchs” which harbour the (false) graves of Abraham and Sarah, which, like the Temple Mount in Jerusalem, are holy to both Jews and Muslims. Some 160,000 Muslims daily confront the few hundred fanatical Jews and Jewesses who have settled there, and who openly declare that their aim is to bring about the expulsion of all Muslims from the entire city.
Hebron is Apartheid City. The main street where the incident took place (appropriately called in Arabic “martyr’s street”) is closed to Arabs. Incidents can break out any time.
So why did the local military send a lone 19-old soldier to guard a street there?
Any soldier, even a normal one, sent to do guard duty alone in a dangerous place, may easily panic. In the clip David definitely looks frightened.

The whole situation… shows the reality of the occupation, in which a population of millions of human beings is living without defence and rights, completely dependent upon the mercies of every single soldier.

But David is not an ordinary soldier. According to the army itself, just a few hours before he was sent to this post, he attacked his superior and a comrade, beating them up in what sounds like a hysterical rampage. A few hours later, after already being sentenced to prison, he was sent out on this lonely task.
It is not the sane judgment of Private David that is in doubt, but the sanity of the officer who ordered him there.
The whole situation goes far beyond the dimensions of a local incident, which happily ended without victims.
It shows the reality of the occupation, in which a population of millions of human beings is living without defense and rights, completely dependent upon the mercies of every single soldier.
This Israeli army is no worse than any other. It is a mirror of its society, composed of the humane and the sadists, the sane and the mentally disturbed, rightists and leftists, Ashkenazi and Oriental. Judging from his family name (Adamov) David Nahlawi seems to be of Bukharan origin, the Oriental side of the immigrants from the former Soviet Union.
Suheib Abu-Najma, the 15-year old Arab boy involved who looks even younger, was lucky. A Palestinian of any age, walking in any street, cannot be sure what kind of soldier he will come across, and what his mood may be. His life may depend on it.
That is the essence of occupation.
But the significance of the incident goes far, far beyond these lessons. It is revolutionary – in the original sense.

A fascist coup mobilized through the internet?

For the first time in the history of Israel, and perhaps of the world, the internet is providing the basis for a rebellion of the soldiers against the army.

With the army rank and file composed of teenagers, who are indoctrinated from the age of three in the spirit of Jewish victimhood and superiority (both), such a rebellion, if it occurs, is bound to be right-wing, perhaps even fascist.

One may consider the mutiny on the battleship Potemkin in Odessa, 1905, or the uprising of the Petrograd garrison of February 1917, in order to compare it to the totally different situation in today’s world of the internet. Now, in less than 24 hours, hundreds of thousands of soldiers can openly defy the army command, turning the army into an empty vessel.
Once this has been shown, the mutinous capabilities of the social media are unlimited. It puts an end to the sacred assumption that the army obeys the civilian elected authority. It also puts an end to the assumption that a military coup can only be carried out by a junta of senior officers, the “colonels”. Now simple soldiers, incited by some rabble-rousers, can do it.
Binyamin Netanyahu was left, literally, speechless (something very unusual for him). So was Moshe Ya’alon, the defense minister, a former incompetent chief of staff. So was the present chief of staff, Benny Ganz, who in this crisis was shown to be helpless.
In the specific situation of Israel, this is extremely dangerous. Of course, it is easy to imagine a Potemkin-like situation, where the simple soldiers rise up against the brass in the name of equality, but that is sheer fantasy. With the army rank and file composed of teenagers, who are indoctrinated from the age of three in the spirit of Jewish victimhood and superiority (both), such a rebellion, if it occurs, is bound to be right-wing, perhaps even fascist.
Until this week, such a rebellion seemed impossible. When Ariel Sharon deployed the army in 2005 to evict a few thousand settlers from the Gaza Strip, no soldier dared to refuse. Now, with the capabilities of the social media, the story could end quite differently. The next time the army is ordered to remove a settlement, there may be mass refusal mobilised through the internet.
There is a message in this for every army in the world.
A new historical era has begun. Any army can rebel by internet.
Army prisoner David Adamov can be proud of himself.