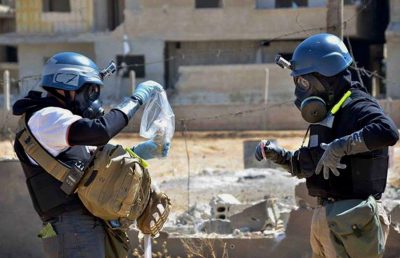 The chemical watchdog group is mandated “to implement the provisions of the Chemical Weapons Convention…to achieve…a world…free of” CWs.
Its mission includes conducting “credible and transparent” on-site inspections to verify use of and destruction of these weapons.”
Time and again, it flagrantly breaches its mandate, serving US-led Western interests, producing dubious reports with falsified, distorted rubbish, suppressing vital information.
Russia’s Foreign Ministry spokeswoman Maria Zakharova earlier slammed the group for failing to discharge its duties as mandated by the Convention on the Prohibition of Chemical Weapons.
Last March, its falsified Fact-Finding Mission (FFM) report on the alleged April 7, 2018 CW incident in Douma, Syria said the following:

The incident was a US/NATO false flag, Syria wrongfully blamed for a victimless nonevent – no one killed, hospitalized or ill from exposure to toxins, not chlorine or any other banned substance, nothing. The OPCW lied suggesting otherwise.
Douma eyewitnesses and local medical personnel debunked the falsified narrative. Visiting the site days after the alleged incident, Russian technical experts found no evidence of chemical or other toxins in soil samples and other analysis.
Like many other times, Damascus was falsely blamed for what it had nothing to do with. At the time, Russia’s envoy to the OPCW Alexander Shulgin said  testimonies from 17 witnesses, including physicians who were right at the scene on that day…recount(ed) the true story of the (false flag) incident.”

“(W)e had no doubt that the allegations of chemical use in Douma are a fabricated and provocative play staged by the so called White Helmets and Western media outlets.”
“We can prove that the video of the White Helmets is fabricated, and therefore there is no basis or validity to the signals of Western countries that this material is evidence of a chemical attack in the city of Douma.”

Instead of reporting accurately on what happened, the OPCW bowed to US interests, delivering a falsified report months later.
Damascus slammed the report, saying it “does not differ from the previous mission reports filled with distorted facts” — falsely blaming Syrian forces for CW incidents staged by US-supported terrorists.
Regarding the Douma incident, Syria’s Foreign Ministry blasted the OPCW’s “lack of professionalism,” adding:

“(I)t was easy for the Syrian specialists to discover that the OPCW experts were lying when claiming that they investigated the (Douma) incident in the report from various aspects.”

The organization “ignored the possession of toxic chemicals by terrorist groups, although the mission found those substances in the warehouses of terrorists when they visited them.”
The independent Working Group on Syria, Propaganda and Media obtained an unpublished OPCW report on the Douma incident — indicating it was staged, Damascus having nothing to do with it.
According to the group’s Piers Robinson,

“(w)e have confirmation from multiple sources that (the unpublished OPCW report) is authentic.”

Chlorine cylinders found on the scene were placed next to a pre-existing crater — by Western funded, al-Qaeda connected White Helmets. They were not dropped by Syrian aircraft or helicopters as falsely claimed.
Expert independent evaluation determined that two chlorine cylinders were manually placed at the scene to falsely blame Damascus for what it had nothing to do with.
The OPCW’s unpublished report refuted the findings of its published one last March. Ahead of the April 2018 incident, Moscow and Damascus warned of an impending false flag CW attack by US supported terrorists to be wrongfully blamed on Syrian forces.
On Friday, Russia presented a draft Security Council resolution, calling for the OPCW to fulfill its mandate, saying the following:
The Security Council “emphasizes the need to unite the efforts of States Parties to the (chemical weapons) Convention in order to enhance strict compliance with their obligations under the Convention avoiding politicization,” adding:
The SC “calls on the States Parties to the Convention to cooperate with each other in a constructive manner and seek to restore the spirit of consensus in the OPCW for the sake of preserving the integrity and inviolability of the Convention.”
Russia’s UN envoy Vassily Nebenzia accused the OPCW of being “hijacked by politics,” adding: “We are trying to get the (organization) back on track because (it’s) off track and now it is so politicized.”
“It was always a technical organ where consensus prevailed, and now we see that it is completely politicized, with politicized agenda from various parties” — its credibility lost.
Throughout years of US launched aggression on the Syrian Arab Republic since March 2011, not a shred of credible evidence indicates CW use by government forces. Indisputable evidence shows US supported terrorists used banned toxins numerous times, incidents falsely blamed on Damascus.
A Trump regime veto of Russia’s draft resolution is likely, supported by Britain and France, wanting nothing interfering with their ability to manipulate the OPCW to serve their interests.