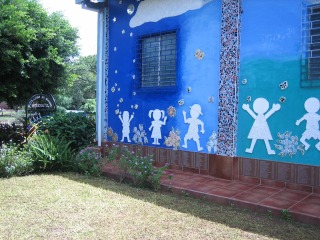 Garden next to church in El Mozote where hundreds of child victims lie buried.

Thirty-six years ago, from December 10-12, 1981, the armed forces of El Salvador massacred hundreds of children in the town of El Mozote and surrounding communities. Last week El Salvador’s government divulged the results of the first official register of the victims who died in that massacre. Of 978 victims executed, 553 or 57% were under 18 years of age and 477 were 12 and under. Twelve infants died in their mothers wombs. Henceforth, at El Salvador Perspectives, we will refer to this atrocity as the “Massacre of Children and Others at El Mozote.”

As it covers the trial, the online periodical El Faro has offered us another view into the lives of the victims. A photogallery at the site shows ordinary objects of life in the village. The objects were recovered during the course of exhumations locating the bodies of the army’s massacre. Like the artifacts from Pompeii or Joye de Ceren, these items from everyday life give us a glimpse into the pre-disaster lives of the victims.

On this 36th anniversary, president Salvador Sanchez Ceren traveled to El Mozote for the first time during his presidency. In his speech, the president spoke of a debt to the victims, of the government’s efforts to invest in the zone as a form of reparations through public works, a health clinic, and cultural activities. The president indicated there were plans to construct a center devoted to historic memory so the events at El Mozote would not be forgotten. Despite his reference to historic memory, however, the president made no indication that the military would be required to open its archives from the time. He also made no mention of the current trial proceedings where former military commanders are charged with responsibility for the massacre of children and others at El Mozote.

Criminal law in El Salvador talks about those who are the material authors of a crime, the ones who pulled the trigger, and the intellectual authors of a crime, the ones who gave the orders for the crime. There have been previous trials in El Salvador for the material authors of such crimes as the murder of the Jesuits, a housekeeper and her daughter in 1989, or the murders of the four US churchwomen in 1980. But the current trial in the courtroom in San Francisco Gotera is the first full trial of the intellectual authors of atrocities committed during the civil war. For that reason, as well as the magnitude of the crime of a massacre of hundreds of children and others, the trial is historic.

The El Mozote criminal prosecution has developed a momentum and a seriousness not seen in any other case involving war crimes from the time of El Salvador’s civil war. It is a momentum pushed by the zealous efforts of the human rights lawyers for the victims who have called witness after witness to the stand to describe the loss of their families at the time. I have seen the coverage of the suit  and the commentary about it in social media increasing as each new witness takes the stand. In small steps, the country is starting to confront what justice means for a military command which ordered its soldiers to massacre children.