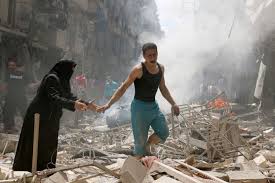 Al-Qaeda in Syria and associated forces are currently driving a large scale attack from the south-west into Aleppo city. Their aim is to create a new corridor between the Idleb/Aleppo rural areas they occupy and the besieged al-Qaeda controlled areas in east-Aleppo. Between 5,000 and 10,000 al-Qaeda fighters, using U.S. supplied equipment, are taking part in the battle. Formally some of the fighters are “moderates” but in reality all this groups are by now committed to implement Sharia law and to thereby suppress all minorities. They made some initial progress against government forces but are under fierce attack from the Syrian and Russian air forces.

The Russian General Staff has warned since April that al-Qaeda in Syria (aka Jabhat al-Nusra aka Fateh al Sham) and the various attached Jihadi groups were planing a large scale attack on Aleppo. An al-Qaeda commander confirmed such long term planning in a pep-talk to his fighters before the current attack.

This shines a new light on the protracted talks Secretary of State Kerry has had for month with his Russian colleague. The U.S. tried to exempt al-Qaeda from Russian and Syrian attacks even as UN Security Council Resolutions demanded that al-Qaeda and ISIS areas be eradicated. Then the U.S. tried to make an “offer” to Russia to collectively fight al-Qaeda should Russia put its own and Syrian forces under U.S. control. We called this offer deceptive nonsense. All this, it now seems, was delaying talk to allow al-Qaeda to prepare for the now launched attack.

Another step in the delaying, though a failed one, was the re-branding of Jabhat al-Nusra as Fateh al-Sham. Some “western” media called that a split from al-Qaeda but in reality is was a merging of al-Qaeda central and Nusra/al-Qaeda in Syria under a disguising new label. Al-Qaeda’s Qatari sponsors had demanded the re-branding so al-Qaeda in Syria could publicly be sold to “western” governments and their public as “moderate rebels”. But the sham failed. It was too obvious a fake to be taken seriously. The “western” support for al-Qaeda will have to continue secretly and in limited form.

The current attack on Aleppo is serious. The Syrian army lacks ground forces. Significant professional ground forces from Iran were promised but never arrived. Iran was still dreaming of an accord with the U.S. and therefore holding back on its engagement in Syria. The Afghan farmer battalions Iran recruited are not an alternative for professional troops. Defending against an enemy that is using lots of suicide vehicle bombs to breach fortifications and death-seeking Jihadis to storm field positions is difficult. It demands diligent preparation excellent command and control.

If this attack can be defeated the huge losses al-Qaeda will have to take might end its open military style war. If al-Qaeda succeeds with the attack the Syrian army will need very significant additional ground forces to regain the initiative.

But no matter how that battle goes strategically the U.S. is sniffing defeat in its regime change endeavor. It is now proposing to split Syria. Syria and all its neighbors are against this. It will, in the end, not happen, but the damage Washington will create until it acknowledges that fact could be serious. Russia can and should prevent such U.S. attempts of large scale social engineering.

Russia on the other side has now to decide if it wants to escalate enough to create more than the current stalemate. Over time a stalemate becomes expansive and it may, at any time, suddenly turn into defeat. The U.S. negotiation positions so far were obviously not serious. The U.S. delayed to allow for further large attacks on the Syrian government. The alternative for Russia is to either leave Syria completely or to escalate enough to decisively defeat the Jihadis. That is not an easy decision.

Today some Jihadis shot down another Russian helicopter over Syria. The bloody body of the dead pilot was dragged through the mud by some local nuts and the video thereof proudly presented. If the Russian government needs some public pretext to go back into Syria it now has it. Also today the Islamic State threatened to attack Russia within its border. Another good reason to return to Syria in force. Of note is that Russia is already extremely pissed over the unreasonable hostile climate towards it in Washington DC. It will have consequences.

The Iranian Supreme Leader Khamenei today acknowledged that the nuclear agreement with the U.S. is a failure. The U.S. did not deliver on its end. Iranian money is still blocked in U.S. controlled accounts and no international bank wants to do business with Iran because the U.S. is threatening to penalize them. The conclusion, Khamenei says, is that no deal with U.S. over any local issue in the Middle East is possible and that all negotiations with it are a waste of time. This new public position may finally free the limits the Rouhani government of Iran had put on Iranian deployments to Syria. Why bother with any self-limitation if the U.S. wont honor it?

How the situation in Syria will develop from here on depends to a large part on Turkey. Turkey is changing its foreign policy and turning towards Russia, Iran and China. But how far that turn away from the “west” will go and if it will also include a complete turnaround on Syria is not yet clear. Should Turkey really block its borders and all supplies to the Jihadis, the war on Syria could be over within a year or two. Should (secret) supplies continue, the war may continue for many more years. In both cases more allied troops and support for the Syrian government would significantly cut the time (and damage) the war will still take. That alone would be well worth additional efforts by Syria’s allies.

Will Tehran and Moscow agree with that conclusion?