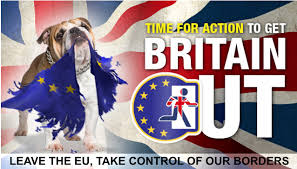 Brexit is a disaster we can only understand in the context of Britain’s imperial exploits. A Bullingdon boy (Oxford frat boy) gamble has thrown Britain into the deepest political and economic crisis since the second world war and has made minority groups across the UK vulnerable to racist and xenophobic hatred and violence.

People of color, in particular those in the global South, know all too well what it is to be at the receiving end of the British establishment’s divisive top-down interventions. Scapegoating migrants is a divisive tool favored by successive governments, but the British establishment’s divide and rule tactic was honed much further afield in the course of its colonial exploits. Britain has a long history ofinvading, exploiting, enslaving and murdering vast numbers of people, crimes for which it has never been held accountable.

While the British Empire may be a thing of the past, British imperialism is not. Today the Chilcot inquiry reports on the role of Tony Blair’s government in the 2003 invasion of Iraq, which resulted in the death of nearly half a million Iraqis and the destabilization of the region, for which its inhabitants continue to pay the price. It isno coincidence that the Blairite wing of the Labour Party, amidst the Brexit chaos, launched a coup against its current leader, Jeremy Corbyn, who is set to call for Blair to be put on trial for war crimes.

The referendum that resulted in a 52 percent vote in favor of Britain leaving the EU was initiated by the Conservative government. Shortly after the result was announced, it became clear that the leaders of the Brexit campaign had not wanted this result. Member of Parliament Boris Johnson appeared ashen-faced at a press conference. He had neither expected nor wanted to win the referendum. He only wanted to be next in line for Number 10 Downing Street. David Cameron, who had led the Remain campaign, resigned as prime minister immediately. He had called the referendum in a bid to keep the Conservative Party together, without sparing a thought for the lives that would be destroyed if the bet did not pay off. His gamble backfired, as did Boris Johnson’s. Member of Parliament Michael Gove, who had been Johnson’s right-hand man in the Leave campaign, betrayed him within days of the result, announcing he would be running for prime minister, thereby ending Johnson’s bid to lead the country. This series of events has thrown the Conservative Party into disarray, the very outcome Cameron had wanted to avoid. Nigel Farage, who stoked up unprecendented levels of racist hate and deserves much of the credit for the Brexit win, resigned as leader of the UK Independence Party on Monday, saying he “wants his life back.”

As political leaders jump ship in the wake of the Brexit vote, reports have emerged of a Britain divided, of a traumatized population, grieving and suffering the onset ofdepression. There is talk of the need for reconciliation in a country where communities and families have been divided. Alongside this, there are expressions ofanger and demands for the British establishment to be held accountable for the outcome of the referendum.

There is no doubt that the feelings of anger and loss in the wake of Brexit are real, but where is our collective sense of outrage in the face of the establishment’s divisive and destructive actions elsewhere? After all, the deregulatory reforms entailed in austerity policies imposed in European Union countries with disastrous consequences, including cuts to vital welfare services, following the 2007 financial crisis, as Diamond Ashiagbor has argued, are “medicine first trialed on the global South since the 70s.” Ashiagbor notes, “European states are experiencing this as a category error, in part because they have not been on the receiving end of such policies,” which are all too familiar in the global South.

In the week following the announcement of the referendum results, two news items probably escaped most people’s attention. The UK Supreme Court delivered a rulingthat further impedes the prospect of the Chagos Islanders returning to the home from which they were forcibly removed in 1971 by the colonial British government as part of a deal to allow the US to establish a military base on the largest island, Diego Garcia. Also in the news last week were reports of 94-year-old Kenyan, Nelson Njao Munyaka, who testified in the High Court about killings he witnessed by British soldiers under 1950s British colonial rule. Munyaka is one of 40,000 Kenyans suing the British government over injuries and loss suffered in the course of its repression of the Mau Mau independence movement. Munyaka spoke of witnessing the shooting of his workmates, being made to carry their corpses and the flashbacks he suffers of the physical and verbal assaults he endured at the hands of British soldiers.

Brexit is not only nostalgia for empire — it is also the fruit of empire. Britain is reaping what it sowed. The legacies of British imperialism have never been addressed, including that of racism. British colonial rule saw the exploitation of peoples, their subjugation on the basis of race, a system that was maintained through the brutal and systematic violence of the colonial authorities.

The prevalence of structural and institutional racism in Britain today made it fertile ground for the effectiveness of the Brexit campaign’s racist and dehumanizing rhetoric of “taking back control” and reaching “breaking point.” This rhetoric is entirely divorced from an understanding of British colonial history, including the country’s recent imperial exploits, which have destabilized and exploited regions andset in motion the migration of today.

Islamophobia powered the Blair-Bush war machine, allowing the lie to be peddled that only the Arab world produces brutal despots, and that the lives of nearly half a million Iraqis are an acceptable price to pay for Britain to be the closest ally of the world’s superpower. Just as the political leaders who called the EU referendum along with those who led the Leave campaign did so with no plan in place for the aftermath, so did the Bush-Blair coalition embark on the 2003 invasion of Iraq with catastrophic consequences. Thirteen years on, Iraqis continue to feel viscerally thetrauma of war and the pain of their divided society. Only this week, another suicide bombing in a busy marketplace took the lives of more than 200 people.

The British establishment does not care to learn lessons from the past. Recall its thoughtless and entirely self-interested military intervention in Libya in 2011, which has left the country in a war-torn state of violence and chaos, a hot-bed for ISIS (also known as Daesh). But we can learn lessons — lessons that might help the left build solidarity and resist repression in more productive ways. We can begin by understanding Brexit instability and our feelings of loss and fear in the context of longstanding and far-reaching oppression elsewhere. As for privileged Remainers with power and influence, they are disingenuous not to accept a large slice of responsibility for the outcome of the EU referendum. From New Labour’s redefining of the Left as “extreme centre,” to Labour’s “austerity lite,” to their support for imperial wars and the mainstream media’s marginalization of left voices and people of color, and their denial of racism, they oiled the wheels of the Brexit battle bus. It is no use for the powerful liberal mainstream to cry crocodile tears now. They would do better to recognize their role in creating the conditions for the sort of racism that propelled the Brexit campaign to victory.