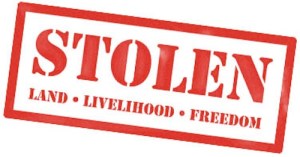 By Graham Peebles
Ancestral land which for generations has served as home and source of livelihood for hundreds of thousands of indigenous people in Ethiopia is being leased out to foreign corporations on 99-year renewable contracts at nominal sums.

The land giveaway, or agrarian reforms as the Ethiopian government prefers to say, began in 2008 when the government, under the brutal premiership of Meles Zenawi, invited foreign countries and corporation to take up highly attractive deals and turn large areas of land over to industrial farming for the export of crops. India, China and Saudi Arabia were all courted and, along with wealthy Ethiopians, they eagerly grabbed large pieces of land at basement prices, with rates varying from 1.10 to 6.05 US dollars per hectare (ha). Comparable land in India would set you back 600 dollars per hectare.
The Oakland Institute, a US-based think tank, estimates that a total of 3,619,509 ha, has been leased out. This is land that has been made available by the forced relocation of hundreds of thousands of indigenous people under the government’s universally condemned “Villagization” progamme, which aims to relocate over 1.5 million people from their homes.
Indian corporations, split between 10 investing companies, have taken the lion’s share, acquiring around 600,000 ha concentrated in Gambella and Afar. The term “investing” implies benefits for Ethiopia, which is misleading. “Profiteering”, or “exploiting” is closer to the truth. As the Oakland Institute says, “taking over land and natural resources from rural Ethiopians is resulting in a massive destruction of livelihoods and making millions of locals [farmers and pastoralist communities] dependent on food handouts”. With small-scale farmers being evicted from their land, prices of staples such as teff, used by millions throughout Ethiopia to make bread (injera), have rocketed, increasing fourfold since 2008.

In line with its ambitions to achieve diversity and world food dominance, Karuturi Global, the world’s largest grower of roses, leads the Indian charge, leasing 311,700 ha in Gambella. According to the international non-governmental organization GRAIN, Karuturi also wants to set up farming operations throughout eastern and southern Africa on more than one million hectares.
Almost a quarter of Gambella’s 25 million ha has been earmarked by the federal government for agricultural “development”. Karuturi, whose profits rose 55.13 per cent in the quarter ending June 2012, took its chunk without even seeing it, paying only 1.10 dollars per hectare.
In addition, Indian farmers are being sub-contracted to grow maize, cereals, palm oil and sugarcane, among other things, all destined for export to India or Europe, where companies farming in Ethiopia (and other sub-Saharan African nations), benefit from lower import duties applied to developing countries.
Another major Indian company leasing land in Gambella is the green-sounding BHO Bioproducts. Its chief operating officer, Sunny Maker, told Bloomberg in 2010 that the company plans to invest more than 120 million dollars in rice and cotton production, which by 2017 should “generate about 135 million dollars a year from sales divided equally between domestic [Indian] and international markets”. He added that the “incredibly rich fertile land” will all be “cleared within the next three years”. Cleared, yes, violently, indiscriminately and totally – villages, people, forests, woodland, all destroyed, burned, relocated, displaced, desecrated.
The government’s promise to such prized investors is that the land is handed over stripped of everything and everyone. Dissent is not allowed and, when it occurs, is dealt with brutally. As Anuradha Mittal, the executive director of the Oakland Institute, makes clear, “The repression of social resistance to land investments is even stipulated in land lease contracts; [it is the] state’s obligation to ‘deliver and hand over the vacant possession of leased land free of impediments’ and to provide free security against any riot, disturbance or any turbulent time.”
The “rich fertile land”, lovingly cultivated by the men and women who have farmed it for generations, is unlikely to be nurtured so carefully by Indian (or indeed Chinese or Saudi) corporations with their thirsty GM seeds. As Oxfam says in its report Land and Power, “investors’ short time scales may tempt them into unsustainable cultivation, undermining agricultural production”.

Land is a prime asset in the commercialization of everything and everywhere, and the “rich fertile land” in Ethiopia is cheap, even by sub-Saharan African standards. Along with long-term leases, the government offers a neat bundle of carrots, including tax incentives and unrestricted export clauses, incentives which, the Oakland Institute says, “deny African countries economic benefits” from land deals that the Ethiopian regime wraps up neatly in its complete disregard for the human rights of the indigenous people.
The Oakland Institute reports that, in exchange for such attractive deals, the Ethiopian government has been extended “a 640-million-dollar line of credit … over five years to boost sugar production in the country’s Lower Omo region”. This is not a philanthropic gesture but a sales trap by India’s EXIM Bank, which stipulates that “Ethiopia must import 75 per cent of the value of the credit line in the form of Indian goods and services”.
The government-owned sugar plantations in the Lower Omo are themselves attracting a great deal of concern and criticism from human rights groups, which highlight the environmental and human damage being perpetrated. Government acts of violence and abuse, in the various land-deal regions, are justified under the overused and misleading title of “development”, a term that has been appropriated by the World Bank and the International Monetary Fund, and misunderstood and distorted by government development agencies.
More concerned with sitting at the top table and cultivating the right international allies than with doing its constitutional duty and serving the people, the Ethiopian government is in danger of giving away, and for peanuts, its “rich and fertile” land to overseas companies that have no interest in Ethiopia, it’s environment, its culture and even less its people.

Hunger and poverty stalk both Ethiopia and India. Some 12-15 million people survive on food aid in Ethiopia, which at 76 ranks bottom in the World Hunger Index.
India, which has the world’s highest number of malnourished children and where 25 per cent (around 270 million people) of the world’s hungry live, is the 65th hungriest nation in the world, below Niger and the Sudan. This is despite the fact that, according to the World Food Programme, India “grows enough food for its people”.
The commercialization of the countryside in India and Ethiopia, which is displacing large numbers of small-scale farmers and concentrating crop production in the hands of multinationals, is intensifying existing levels of hunger. Substantive agricultural reform and real development would see the army of skilled small-scale producers, with generations of local knowledge and love of the land, supported with the necessary capital and technology and given access to markets that corporations bring. Such an agrarian revolution, ethically founded, environmentally healthy and socially sustained, would build long-term food security and feed the hungry.

India has no domestic need for food produced by the overseas industrial farms that are causing such far-reaching damage to the hundreds of thousands of displaced people in Ethiopia as well as to the natural environment. The trend in Ethiopia echoes what is taking place to a much greater degree in India. The government has shifted all support away from Indian farmers and is backing the transfer of land from the rural poor to large companies, causing the displacement of millions (60 million to date, according to Arundhati Roy) of indigenous people.
According to Oxfam, multinationals are targeting countries with “poor governance”, ones that “allow investors to secure land quickly and cheaply… cherry picking countries with weak rules and regulations”. Needy nations, like hungry people, make easy targets for multinational man whose pockets governments are desperate to nestle inside. The driving force behind such destructive land developments, undertaken by corporations obsessed with an insatiable desire for growth, is, as Oxfam suggests, profit and profit alone.