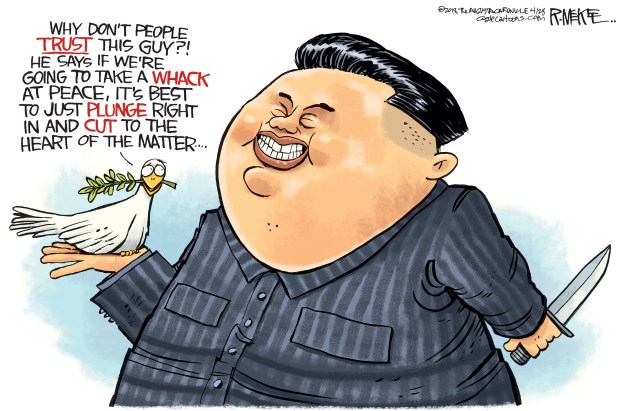 The two Koreas have agreed to take further steps toward peace following a one-on-one meeting between North Korean leader Kim Jong-un and South Korean President Moon Jae-in, who is on his first ever visit to Pyongyang.
The two leaders issued a joint statement at the end of the second day of their summit in the North Korean capital on Wednesday, agreeing to take a step closer to peace by turning the Korean Peninsula into a “land of peace without nuclear weapons and nuclear threats.”
“The era of no war has started,” Moon said at a joint press conference with Kim after issuing the statement. “Today, the North and South decided to remove all threats from the entire Korean Peninsula.”
He said that Kim “agreed to permanently close the Tongchang-ri missile engine test site and missile launch facility in the presence of experts from relevant nations.”
The South Korean president said the North’s leader had also agreed to shut down its Yongbyon nuclear facility but only if the United States took “corresponding measures.”
It was not clear what measures were expected of the US.
Moon said Pyongyang had already pledged to work toward the “complete denuclearization of the Korean Peninsula” during his first encounter with him in April, in the Demilitarized Zone (DMZ) that separates the two Koreas.
The two Koreas “have continuously shown their trust toward one another and I hope there will be another summit between the two countries as soon as possible,” Moon said.
Kim also agreed to work toward denuclearization during a summit with US President Donald Trump in Singapore back in June.
But North Korea has said denuclearization will have to be phased, with each stage coming in return for reciprocal steps by the US, potentially including the removal of US forces from the region.
Yet, no specific steps have been designated toward that goal, and Pyongyang says that, while it has taken several goodwill measures — including the suspension of missile and nuclear tests — the American side has taken no moves in return.
North Korea has also already dismantled a nuclear site and has returned the remains of some US soldiers killed in the 1950-53 Korean War to America.
In return, Pyongyang is also seeking relief from harsh international sanctions — mostly spearheaded by the US — imposed on the country over its nuclear and missile programs.
The US, however, has not offered any such relief.
Kim to visit Seoul
When President Moon hoped for another summit, he must have had little idea that his wish would be granted very soon. Kim said shortly after their meeting that he would make a visit to the South in “the near future,” in what would be the first-ever visit to the capital, Seoul, by a North Korean leader.
Moon then said that the trip could happen this year unless there were “special circumstances.” He said the trip would be “unprecedented” and would “provide a turning point for the two Koreas.”
‘This divided nation to unite on its own’
Kim described the latest agreements as a “leap forward” toward military peace on the peninsula.
“The world is going to see how this divided nation is going to bring about a new future on his own,” the North Korean leader said, in a remark potentially meaning that diplomacy with the US, which has already stalled, may not be necessary.
The two Koreas also plan to link up their railways, allow reunions for families separated by the Korean War, and to co-host the 2032 Summer Olympics, according to the joint statement.
The Korean War ended with a truce and not a peace treaty. Ever since, the two countries were on a near-constant war footing. But Kim initiated a rapprochement with South Korea in January. And the US started diplomatically engaging North Korea only later.
The two Koreas have since been advancing their relations. But the US failure to reciprocate North Korean moves has plagued diplomatic engagement between Washington and Pyongyang.
Trump ‘excited’ by developments
Following the announcement, Trump took to Twitter to describe the developments as “very exciting.”

Kim Jong Un has agreed to allow Nuclear inspections, subject to final negotiations, and to permanently dismantle a test site and launch pad in the presence of international experts. In the meantime there will be no Rocket or Nuclear testing. Hero remains to continue being… …returned home to the United States. Also, North and South Korea will file a joint bid to host the 2032 Olympics. Very exciting!
— Donald J. Trump (@realDonaldTrump) September 19, 2018

He failed to mention the North Korean demand for reciprocal US measures.