Human Rights Crisis After the Coup 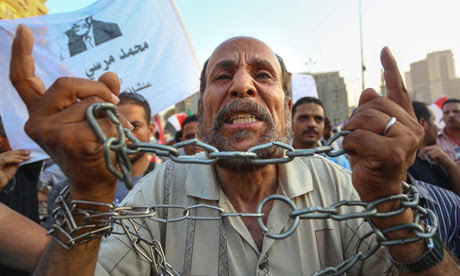 by RAMSEY CLARK and ABDEEN JABARA

We recently visited Egypt leading a delegation of lawyers to observe the situation of human rights in that country. We were troubled by what we saw and heard. We are also troubled by the United States’ support for a government installed by a military coup.
The United States and more than 160 States have agreed to respect and ensure the right to participate in one’s government, for example, by agreeing to article 25 of the International Covenant of Civil and Political Rights. Nevertheless, as this right came under serious attack in Egypt, the United States continues to support the Egyptian military as it imposes its will on the Egyptian people. This support should stop until and unless the freely and fairly elected government is restored.
The military coup that took place in Egypt on 3 July 2013 is a serious violation of the right to participate in one’s democracy. It is a violation of the rights of the majority voters in the Egypt’s presidential and parliamentary elections in 2011 and 2012.
The serious deterioration of human rights in Egypt in the aftermath of the military coup is largely due to the military coup leaders’ unwillingness to allow any significant expressions of dissent and the military coup leaders’ failure to respect the will of the Egyptian people.
During our visit to Cairo we heard reliably allegations of massive, widespread and serious violations of the right to fair trial, to an independent judiciary, to security of person, to the prohibition of torture, and about a policy of violent assaults on women. The level of these abuses is unprecedented in Egypt, a country with which we are familiar for almost half a century.
Grave concerns were expressed by lawyers about the integrity of the courts. The trial of Egypt’s first elected President Mohamed Morsi by the military is a case in point. The procedures that exist in the Egyptian Constitution for trying their President have been ignored. This has resulted in President Morsi being tried by an illegal court that appears to have been created merely to justify removing him from office.
The military coup leaders have been unrelenting in their attack on the peaceful supporters of the Muslim Brotherhood.
In December 2013 the military coup leaders declared the Muslim Brotherhood an illegal entity. They did this despite the fact that the Freedom and Justice Party with which it is associated, won more support than any other party in Egypt’s free and fair parliamentary and presidential elections. This action violates the right to free speech, assembly and association.
Recently, an Egyptian court, functioning under the military coup, sentenced more than 400 supporters of the Muslim Brotherhood to death for the killing of a single policeman. At the same time, thousands of Egyptians remain arbitrarily detained and without fair trial.
The dismal state of human rights in Egypt, which we witnessed first hand, should be a concern for us all. The United States should stand with the Egyptian people and not with the leaders of a military coup.

One thought on “The Deterioration of Egypt”