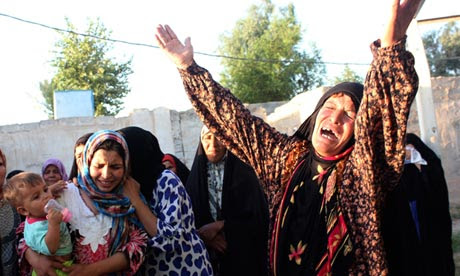 PM David Cameron has recently appointed Baroness Emma Nicholson of Winterbourne as his Trade Envoy to Iraq. The Baroness described Iraqi economy as “vibrant and booming “, urging the UK to make “the best of the enormous opportunities Iraq offers us”. The pre invasion high profile of Nicholson on Iraq was related to human rights, so what does this switch to being the Prime Minister’s trade envoy mean?  And is there a link between the old and new roles?
As to be expected, Nicholson made no mention of the massive human rights abuses in Iraq, documented by international bodies, or in its sectarian policy and bombardment of cities. No mention also, even in terms of regret or remediation, of the human cost , long passed hundreds of thousands,  caused by the US –UK invasion and occupation.  And on trade, no mention, even as hope for improvement, of the institutionalised corruption of the regime which made Iraq ranks 171st among 177 nations on the list of corruption index.
One might argue, why should she?  The Baroness, after all, is a politician cashing on behalf of her political party and government.  Well, this could have been acceptable have the politician we’re talking about is not Emma Nicholson who for many decades presented herself to the world as the mother Teresa of human rights, defending in particular, Iraqis’ human rights under Saddam’s rule.   Until 2003, Nicholson was known as one of the most outspoken British politicians against Saddam Hussain (even Tony Blair was not a competition) defending  relentlessly the Human Rights of the Sukan Al-ahwar (Marsh Arabs of Iraq)  and the Kurds in  Halabja.
Nicholson spared no action to defend Iraqis’ “human rights”, from calling in 1988 for the establishment of an International Criminal Tribunal to try Saddam and his key officials for genocide to establishing a charity named after an Iraqi boy who she adopted, from writing books and articles to speaking tours in UK and US. Nicholson was a fierce advocate of the war and occupation not for oil and business contracts but, we were told, to; “free the Iraqi people from terrible tyranny” and British people “should be proud of the important part that we played in freeing the Iraqi people from their decades-long misery.”
Who would argue with such noble mission? However, what followed in the aftermath of the invasion left many Iraqis flabbergasted.  Nicholson has shifted her role from an outspoken champion of human rights to an Executive Chairman of the Iraq Britain Business Council outspoken  on how to“ fight for lucrative contracts “ and  how to compete  for  mega defence contracts with a brutal sectarian corrupt regime while tongue-tied on the human rights of the same people she claimed to defend before the invasion. Is The Baroness’s deafening silence on the well documented crimes and human rights violations in the last ten years,  eight years of them under Nouri Al Malik’s regime related to her appointment as an Honorary Adviser to Nouri Al Maliki, in the field of Health?
Iraqi Journalist Ali Abdul Amir Ajam, a long opponent of Saddam and an admirer of Nicholson’s work, questioned in an article titled “what a low price for a baroness” her silence at a time when Iraqi doctors are  targeted or forced to leave the country. “Today, nothing worries the Baroness about Iraq, but the promotion of its leaders and their achievements in reconstruction, and the security and stability for the major oil companies. Today, the Baroness who used to be obsessed by Freedom for Iraq has nothing to do with the suffering of Iraqis and the violations of their basic human rights”, he wrote.
Over the last eight weeks, the siege and bombardment of Falluja and Ramadi , in Anbar province west of Iraq,  up to 300,000 Iraqis have been displaced. According to UNHCR the new IDPs are on top of Iraq’s population of more than 1.1 million displaced persons, “They are residing in schools, mosques and other public buildings and urgently need various humanitarian items. Pregnant women and children need medical care while all families are in need of drinking water, milk and other food aid, diapers, beds and cooking items.” a consignment of World Health Organization (WHO) medical supplies has reportedly been detained at an Iraqi Army checkpoint since 30 January.
The indiscriminate use of violence on civilians by the Iraqi regime’s forces under the pretext of fighting terrorism has reached unprecedented level. Fallujah hospital was bombarded. Patients and doctors have to be evacuated  Which brings back to memory the “shake and bake” US forces policy in 2004. Hundreds of civilians have been killed or wounded.
In Falluja and more than 1,000 people were killed and another 2,024 people were wounded in Iraq in January.
In a recent interview she was asked: “you know the PM well, this is a man many people say his policies have prompted this violence,  what do you say to him.   It is “the Sunni Shia violence stemming from Syria in the last year”, no mention of Al Maliki what so ever though assuring businessmen “that all big companies are doing wonderful work”.
Hundreds of thousands of people have been demonstrating in various  provinces facing intimidation, detention and targeting.
“Iraqi authorities are detaining thousands of Iraqi women illegally and subjecting many to torture and ill-treatment, including the threat of sexual abuse,” says HRW. Not a word from the Baroness, but her happy photos with Al Maiki speaks louder than words; the embodiment of double standards where Democracy and human rights instead of being applicable to all equally according to law, have become an open text subjected to a multi level “interpretations”. Impunity became the norm to be enjoyed by some governments and their allies no matter how brutal they are against their own people when acting by proxy. This lethal combination of double standards with the silence or impotence of international community in some cases, have legitimise the rise to extremism.