Get your copy of “The Global Economic Crisis: The Great Depression of the XXI Century” on our online store!

“What’s the Primary Cause of Wealth Inequality?”, Charles Hugh Smith asks. It’s financialization, which he describes as “the mass commodification of debt and debt-based financial instruments collaterized by previously low-risk assets, a pyramiding of risk and speculative gains that is only possible in a massive expansion of low-cost credit and leverage”.
Wealth inequalities have been rising since the early 80’s, when financialisation began. Unlike the aftermath of the Great Depression of 1929, in which the bottom 90% saw their incomes rise, the 2008 economic crisis brought lower revenues for the same group, Smith writes.
Meanwhile: “The top 1 percent of Americans raked in 95 cents out of every dollar of increased income from 2009, when the Great Recession officially ended, through 2012. Almost a third of the entire national increase went to just 16,000 households, the top 1 percent of the top 1 percent…”
Last week, the Organization for Economic Co-operation and Development (OECD) published its “Society at a Glance” report, which shows the “staggering rise of poverty, hunger, unemployment and social distress in countries throughout the world in the aftermath of the 2008 economic crash.” For Andre Damon this report is a “damning indictment of the capitalist system and the social policies pursued by governments throughout the world.”
“Particularly devastating are the figures relating to the United States, the center of world capitalism, the heart of the financial crisis and the “richest country in the world”—in which poverty, hunger and social inequality have grown more than nearly any other country surveyed.” (Ibid.)
It’s important to understand that the 2008 economic crisis “was the result of institutionalized fraud and financial manipulation.” This scheme which enriched the wealthiest and impoverished the rest of us was exposed in The Global Economic Crisis: The Great Depression of the XXI Century.
“In all major regions of the world, the economic recession is deep-seated, resulting in mass unemployment, the collapse of state social programs and the impoverishment of millions of people. The meltdown of financial markets was the result of institutionalized fraud and financial manipulation. The economic crisis is accompanied by a worldwide process of militarization, a “war without borders” led by the U.S. and its NATO allies.”
The Global Economic Crisis: The Great Depression of the XXI Century edited by Michel Chossudovsky is a collection of texts revealing “a complex web of deceit and media distortion which serves to conceal the workings of the global economic system and its devastating impacts on people’s lives.” 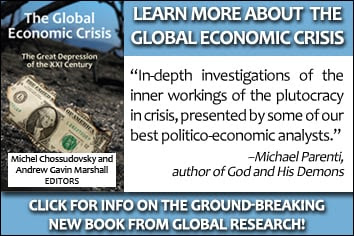 We are still being deceived and lied to. If you wish to understand the Great Depression of the XXI Century,get your copy of the book on our online store.
The book is also available in other formats:
For PDF format, click here
For Kindle edition, click to visit Amazon.com
Special: Global Economic Crisis + Globalization of Poverty (Buy 2 books for 1 price!)
Or become a Global Research member and GET 2 BOOKS! The Global Economic Crisis: The Great Depression of the XXI Century and Towards a World War III Scenario: The Dangers of Nuclear War.