It’s been a while since we’ve done this. So many events have appropriated the time we had to relax and solve brain-crushing questions with the goal of a free lifetime membership in our genius’ club called “DENSA”.  Enjoy.
Remember, you can’t use a paper and pencil.  But, you can use a paper or pencil.  We’ll know if you violate the rules and will impose appropriate punishment.  Good luck:
1.  The picture at the top is of Einstein exhibiting what?
a.  Dementia praecox;
b.  That’s not Einstein, that’s an English Sheepdog;
c.  A fruit fly which he lapped up from his martini;
d.  How humans can cool their bodies without air conditioners;
e.  Congenital Lingual-Protuberosis Syndrome.
2.  We know why Ahmad Mu’aadh Al-Khateeb is not going to Moscow. But, why is Ahmad Jarbaa going?
a.   He is a member of the Bolshoi Ballet Company (he pimps for the ballerinas);
b.   He has a brothel he runs in the Russian capital and he wants to inspect the books;
c.   He was asked by his Saudi handlers to eavesdrop on the negotiations and report back to Bandar;
d.   Jarbaa is going to make sure the Christians in the SNC delegation don’t start passing the vodka around;
e.   b,c,d.
image: https://syrianfreepress.files.wordpress.com/2014/03/ahmad-jarba-trans.jpg

3.  It is believed that AIDS was transmitted by the green monkey to humans.  What is a green monkey?
a.  A young chimp just learning to peel a banana;
b.  A drink made with Creme de Menthe, Midori Watermelon liqueur, Chartreuse and Absinthe garnished with spinach;
c.  A U.S. Hundred Dollar note;
d.  A copper wrench with greenish rust (grynzpan) developing on the handle;
e.  A Saudi Arabian “prince”.
4.   To what classification do vultures, snakes, rats, vermin, hyenas, jackals, dingos and cockroaches belong?
a.   Icky animals;
b.   American congressmen;
c.   Unprotected species;
d.   Desirable trophies;
e.   Obama supported terrorists in Syria and Iraq.
5. What ideological difference separates ISIS from Jabhat Al-Nusra?
a.  Nusra believes that the 72 virgins in Paradise are exchangeable every 10 years. ISIS does not;
b.  Nusra only beheads infidels.  ISIS beheads everybody;
c.  ISIS believes in the Doctrine of Occasionalism where God has already planned your existence according to the Concept of Infinite Boredom;
d.  ISIS and Nusra differ about the use of the human brain: ISIS thinks the brain is useless; Nusra thinks all its members have monkey brains and, therefore, the issue is moot;
e.  Nusra likes to destroy religious shrines; ISIS destroys religious shrines after pillaging them for profit.
6.  Why don’t Italy, Spain and Greece send Islamist terrorists to Syria?
a.  They’re Mediterranean countries and they are too lazy; too much trouble;
b.  All Islamist terrorists in those countries are fat from eating too much olive oil and pasta;
c.  Because the terrorists might come back to start trouble about eating proscuitto;
d.  They can’t because their terrorists have all become winos and need rehabilitation;
e.  They would, but, all the Islamist terrorists have joined the Communist Party.
7. What is the drug of choice in Syria among the terrorist organizations?
a.  Captagon!
b.  ExLax (famous laxative)
c.  Ritalin (treats attention deficit disorder, ADD)
d.  Morphine (It blocks pain impulses in Hell)
e.  Wild Irish Rose
8.  What do the shamans of Wahhabism tell the suicide drivers before they’re sent off in trucks to die?
a.  “Remember, it doesn’t work unless you’re dead!”
b.  “Dying is everything.  But, of course, it’s not for everybody”.
c.  “Smile as you explode. It’ll take the pain away.”
d.  “No! I don’t want to join you right now in the truck. I have more important things to do.”
e.  “Don’t forget to say “Allahu Akbar” or God will send you straight to Hell.”
9.  What requirements must be met before a person can become Caliph?
a.  He must have a turban like Conrad Veidt’s in the Thief of Baghdad;
b.  There are no requirements.  It’s a job like any other;
c.  You have to be programmed by the Mossad and CIA;
d.  Behead at least 5 people a day with a dull bread knife;
e.  Be a teeny-weeny bit related to some relative of the Messenger Muhammad.
image: http://i.ytimg.com/vi/iLxNZCxTEW0/hqdefault.jpg 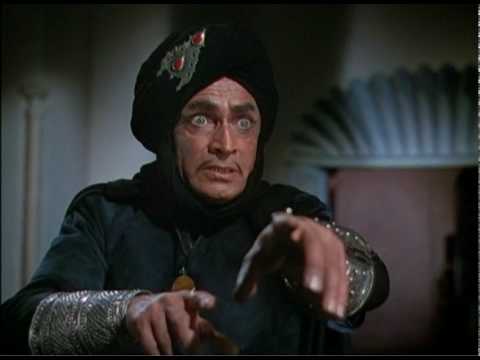 10.  How many Saudis does it take to screw in a light bulb?
a.  At least 3 because 2 have to hold the chair;
b.  No, it’s 6 because Saudi ceilings are so high you need gymnasts to do it;
c.  At least 4 because Saudis tire easily and will need to be replaced at every stage;
d.  2 and a turntable so that the one on the ground can spin the Saudi holding the bulb in the socket;
e.  0, because Saudis won’t screw in a bulb. They have Filipinos do it for them.