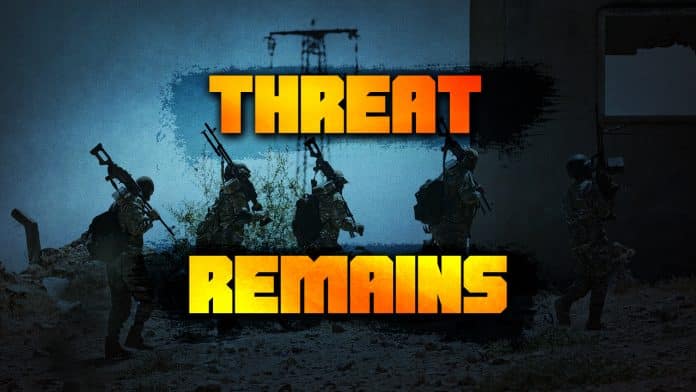 …from SouthFront
Jaysh al-Izza, one of the biggest Free Syrian Army groups in northwestern Syria has welcomed an implementation of the de-escalation zone agreement in Idlib, which was reached by Turkey and Russia earlier this month, the pro-opposition media outlet Enab Baladi reported on August 20.
In a released statement, the group also thanked to Turkey for preventing a military operation by the Syrian Army and its allies in the province of Idlib and nearby areas.
Jaysh al-Izza, which operates in northwestern and northern Hama, is widely known for being one of the key allies of Hayat Tahrir al-Sham (formerly Jabhat al-Nusra, the Syrian branch of al-Qaeda). This may be an indication that Turkey has enough influence and willingness on militant groups in the area to force them to obey the demilitarized zone agreement, which is set to be fully imposed by October 20. However, the situation remains complicated.
During a weekly press briefing on September 20, Maria Zakharova warned that a threat of staged chemical attack in Idlib province is still high. According to Zakharova, Hayat Tahrir al-Sham is supplying its allied militant groups with chemical agents with this purpose.
The US-backed Syrian Democratic Forces (SDF) killed 31 ISIS members and destroyed two vehicles, several mortars and five vehicle-borne improvised devices (VBIEDs) during their advance on ISIS positions near Baghuz al-Fawqani and Hajin in the Euphrates Valley.
Recently, the SDF established a full control of Baghuz and started advancing on the ISIS-held village of al-Fawqani al-Susah.
On September 19, Hezbollah leader Hassan Nasrallah stated that a part of Israeli strikes on Syria was aimed at preventing the Syrian military from boosting their missile capabilities.
“Israel lies when it says that the purpose of the attack was weapons intended for Hezbollah. The Israeli aggression in Syria is intolerable and must be stopped immediately,” he said, adding that Hezbollah would remain in Syria until further notice
“The quietness of the fronts and less number of threats… will naturally affect the current numbers [of Hezbollah members],” Nasrallah said. “No one can force us out of Syria,” he added.
The movement leader further noted that Hezbollah would leave Syria only upon request from the Damascus government.