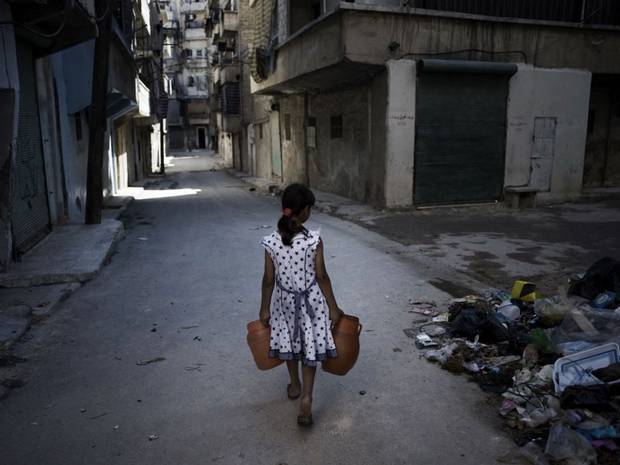 In a botched attempt to stop drinking water reaching government-held districts of Aleppo, rebels managed to cut off water supplies to large parts of the city in northern Syria including their own strongholds. Women and children are being forced to queue up with cooking pots, kettles and plastic bottles to get water from the fountains of mosques and wells that may be contaminated.
The water shortage started 10 days ago when the rebels, who control the two main pumping stations, tried to keep water flowing to their areas in east Aleppo, but stop it reaching the government-held west of the city. Describing the action as “a crime”, Rami Abdel Rahman, the head of the pro-opposition Syrian Observatory for Human Rights, said that the al-Qa’ida affiliate Jabhat al-Nusra and other rebel groups were responsible for the water shortage.
People in both halves of the divided city have been forced to rely on ancient wells and fountains. In west Aleppo the Red Crescent and government agencies have provided some water but say it is not safe to drink over an extended period. Some trucks used for taking away waste water from houses are now selling drinking water likely to be contaminated. Fights have broken out in queues when members of local defence committees and officials have demanded they be given priority. Aleppo used to have a population of 2.5 million though at least one million have fled fighting.
A member of the Aleppo Water Department told the Beirut paper al-Akhbar that the Sharia Authority, which unites the rebel movements, controls a crucial pumping station in the Suleiman al-Halabi region. He said that there is a “danger of insurgents pumping water only to the neighbourhoods that they control as it might lead to the collapse of the integrated water system”.
Even before the recent cut-off of supplies, the water system of Aleppo depended on a degree of grudging co-operation between government and opposition mediated by the Red Crescent. The pumping station depends on deliveries of diesel to fuel a generator.