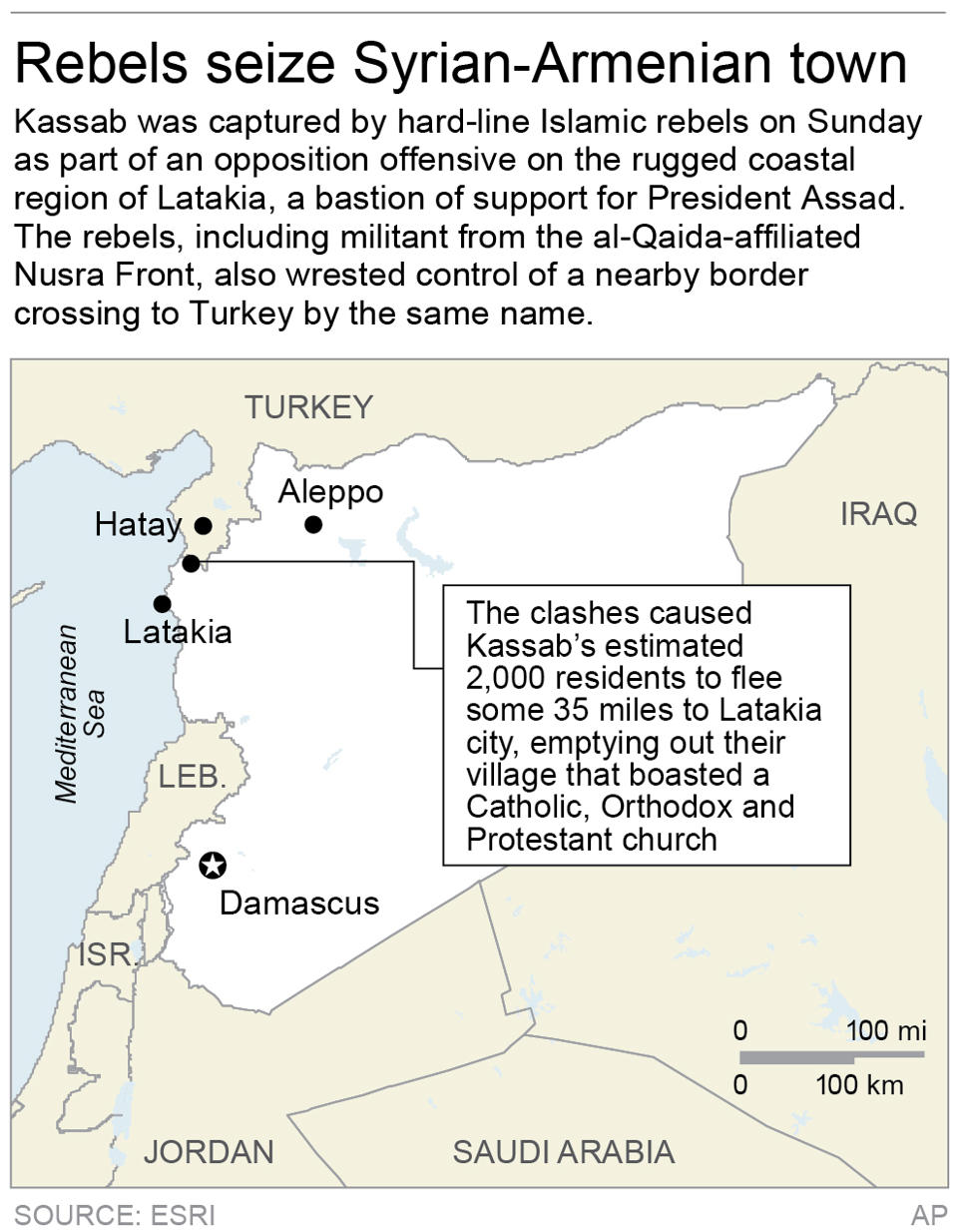 When hundreds of residents of the postcard-pretty coastal Syrian village of Kassab fled this week, it bore historic weight: it was the third time since 1900 that ethnic Armenians there felt compelled to run for their lives.They left once at the hands of vengeful Turkish neighbors, and later because of Ottoman forces. This time it was Syrian rebels storming into town. It was a heavy blow for the minority community that sees the town as key to preserving the Armenians’ identity in Syria.

Kassab “is a symbol of Armenian history, language and continuity. It’s very symbolic,” said Ohannes Geukjian, a political science professor who writes on contemporary Armenian history and politics. “And so the fall of Kassab, I consider it the defeat of Armenian identity in that area.”

Rebels seized control of Kassab on Sunday after launching an attack two days earlier in the coastal Syrian province of Latakia. The fighters were from an array of conservative and Islamic groups, including the al-Qaida-affiliated Nusra Front.

The province has an ancient Armenian presence, but is better known as a bastion of support for President Bashar Assad. It is his ancestral home and that of followers of the Alawite sect, an offshoot of Shiite Islam, that he belongs to.
The clashes led most of Kassab’s estimated 2,000 residents to flee some 35 miles (57 kilometers) to Latakia city, emptying out a village that boasted a Catholic, Orthodox and Protestant church.

“We had to flee only with our clothes. We couldn’t take anything, not even the most precious thing — a handful of soil from Kassab. We couldn’t take our memories,” said a woman to Syrian state television. She identified herself as Kassab resident, but didn’t give her name.

Kassab is surrounded by the villas of middle-class Syrians who built their homes amid green wooded hills overlooking the sea. The area got a boost from a popular 2008 Syrian telenovela, “Daya, Daya,” which was filmed in nearby village of Samra. Tourists flock to the area in the summer.

Kassab residents, speaking to Syrian television, said mortar shells and gunfire came from the Turkish border toward their village. A Syrian field commander on a government-organized trip told journalists in the nearby town of Badrousieh that gunmen began their attack “with clear support from the Turks.”

“The allegations by some circles that Turkey is providing support to the opposition forces by letting them use its territory or through some other ways during the conflict … are totally unfounded,” the Turkish government said in a media statement on Wednesday.

The Turkish government was prepared to admit Syrian Armenian refugees and “protection could be provided to them,” the statement said.

Armenia’s President Serge Sarkisian said Kassab was attacked by Turkish militants in 1909, forcing local Armenians to flee for their lives. In 1915, as the 600-year-old Ottoman empire violently unraveled, the Armenian population was deported by the Turks, and thousands died as they marched across the desert.
A website created by Kassab descendants, “Kessabtsiner,” confirmed those events.

“This is the third expulsion of Armenians from Kassab and it represents a major challenge to modern mechanisms for the protection of ethnic minorities,” Sarkisian said in a statement this week.

In Washington, State Department Deputy Spokeswoman Marie Harf said the United States is “deeply troubled” by the fighting that is “endangering the Armenian community in Kassab.” The U.S. has repeatedly expressed concerns over the growing influence of Islamic radicals in the rebel ranks, and Harf on Friday called on all groups involved in the fighting to protect civilians, religious minorities and their places of worship.

“We have long had concerns about the threat posed by violent extremists, and this latest threat to the Armenian community in Syria only underscores this further,” Harf said.

Syria’s main opposition bloc said in a statement the rebel units belonging to the moderate Free Syrian Army have been fighting against government forces in and around, but adamantly denied that any of the FSA fighters are behind the violence against the Armenians. The Western-backed Syrian National Coalition blamed Assad’s military for the bloodshed, saying they have “deliberately bombed these areas and accused the rebels of it.”

Historians estimate that up to 1.5 million Armenians were killed by Ottoman Turks around the time of World War I, an event widely viewed by scholars as the first genocide of the 20th century. Turkey, however, denies that the deaths constituted genocide, saying the toll has been inflated and that those killed were victims of civil war and unrest.

The forced flight from Kassab has deep meaning for many Armenians, because it is one of the last areas tracing back to the eleventh-century from the Armenian kingdom of Cilicia, said professor Geukjian.
Other areas in modern-day Syria once had ancient Armenian villages, but residents left to join larger communities in cities like Aleppo, or assimilated into the wider Christian minority, or emigrated, said Geuikjian. Only Kassab “kept its identity and language,” he said.

“When you say Kassab, you understand you are referring to the Armenians,” said Arpi Mangassarian of Badguer, a Beirut-based Armenian cultural organization. “It symbolizes Armenian culture.”

Before the Syrian uprising, there were some 70,000 ethnic Armenians in Syria, particularly concentrated in the northern city of Aleppo and the area around Kassab. They were already a tiny minority among 23 million citizens, but part of Syria’s rich mosaic of tiny, ancient Christian and Muslim sects.

As the war grinds on, Armenians have been leaving to Lebanon, Armenia, Canada and the U.S.

The war has grown increasingly sectarian, as hardline Sunni rebel groups play a prominent role in the uprising, and Syrian minorities huddle behind Assad, fearing for their fate should extremists come to power.

There are no statistics of how many Armenians remain, but Geukjian estimated some 15,000 Armenians remained of a pre-war population of 40,000 in Aleppo. Others had drifted toward Latakia and yet others had remained in Kassab, he said.

“What will happen to us? We don’t know,” said the woman from Kassab, speaking to Syrian television.
The ancient area’s loss to ultra-conservative Muslim rebels suggests an uncertain future.

“We are afraid, if you want the truth. Of what is happening now, the future. The future is not clear,” Geukjian said.