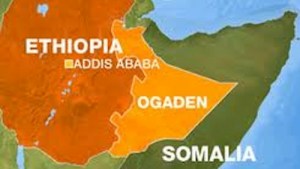 Ethiopia is being hailed as a shining example of African economic growth.

Principal donors and devotees of the International Monetary Fund/World Bank development model (an imposed ideological vision which measures all things in terms of a nation’s GDP) see the country as an island of potential prosperity and stability within a region of failed states and violent conflict.

“Economic performance in recent years has been strong, with economic growth averaging in double-digits since 2004,” states the IMF country report. The economic model (a hybrid of western capitalism and Chinese control) adopted by the Ethiopian People’s Revolutionary Democratic Front (EPRDF) government is a centralised system that denies democracy – consultation and participation in “development plans” is unheard of – and ignores and violates human rights.

A willing ally in the “war on terror”, Ethiopia is a strategically convenient base from which the US launches it’s deadly Reaper Drones over Yemen and Somalia, carrying out “targeted assassinations” against perceived threats to “national security” and the American way of life. In exchange, perhaps, irresponsible benefactors – Britain, America and the European Union – turn a blind eye and a deaf ear to the human rights buses being perpetrated throughout the country by the highly repressive dictatorship enthroned in Addis Ababa.

While there are state-fuelled fires burning in various parts of the country, arguably the worst atrocities are taking place within the Ogaden, where Genocide Watch says the Ethiopian government has “initiated a genocidal campaign against the Ogaden Somali population”.

The Ogaden is a harsh region that is subject to drought and famine where, according to human rights groups and first hand accounts, innocent men, women and children are being murdered, raped, imprisoned and brutally tortured by government forces.

The region borders Somalia and is populated largely by ethnic Somalis, many of whom do not regard themselves as Ethiopian at all and see the Ethiopian military operating within the region as an occupying force. The Ogaden National Liberation Front (ONLF) has been engaged in a struggle for independence for the last 22 years. It was elected to power in the 1992 regional elections; however, after it had the democratic gall to propose a referendum on self-determination, the central government under the leadership of the previous prime minister, Meles Zenawi, sent in the military. Subsequently, leading members of the newly elected regional authority and their supporters were executed and arrested and the army assumed control of the region. The ONLF, branded terrorist by a government that labels all dissenting individuals and groups with the “T” word, was driven into the bush from where it has been waging armed and diplomatic resistance ever since.

Since 2007, all international media and prying, meddlesome humanitarian aid groups have been banned from the area, making it extremely difficult to collect up-to-date information on the situation. The main source of data comes from courageous refugees and defected military men who have found their way to Kenya or Yemen. Most fleeing the region end up in one of the five sites that comprise the sprawling UN High Commissioner for Refugees-run Dadaab refugee camp in north-eastern Kenya. Established in 1992 to accommodate 100,000 people for 10 years, it is often described as the largest refugee camp in the world and is now home to round 500,000, although manipulated Kenyan government figures are much lower.

Maryama arrived in Dadaab with her son and daughter in May 2014 after fleeing her homeland in Ethiopia. She had been the victim of terrible physical and sexual abuse at the hands of the Ethiopian military. Her shocking story echoes the experience of thousands of innocent women – many of whom are no more than children – throughout the affected parts of the Ogaden.

I met Maryama in the UNHCR field office of the Dagahaley site in October 2014. She spoke to me of her life in the Ogaden and the violence she had suffered. We sat on the ground in the shade of a UN office building. She spoke with clarity and passion for over an hour, her two-year-old son on her lap.

Like many people in the Ogaden, Maryama lived a simple life as a pastoralist. Tending her goats and camels, she moved from place to place with her family. She had never attended school, cannot read or write and knows little or nothing of her country’s politics. Sometime in 2012, she was arrested when a large group of armed soldiers from the Ethiopian military descended on her family’s settlement in Dagahmadow in the district of Dagahbuur.

“They came to us one day while we were tending to our affairs in our village and they accused us of being supporters of the ONLF as well as having relatives in the ONLF.” The soldiers

called all the village people together and started carrying out acts of persecution. They took anything of value, including property and livestock, by force and burnt down homes in the process. I had just given birth seven days earlier when they came into my home and they asked me why I am inside the house [a small semi-circular wooden structure made from branches and mud] by myself [she was bathing her son at the time]. They saw footsteps near my home, which they followed and concluded that it must have been left by the ONLF [the prints were in fact made by the military]. All of us were taken out of our homes and questioned about the ONLF. We all denied any involvement. Our homes were then burnt.

The solders moved from house-to-house, questioning people about the footprints. A young mother, who had given birth the day before and was holding her child, was interrogated, but she knew nothing and said so. An elderly woman went to her aid; she was caught by the throat and questioned about the footprints – she knew nothing. They shot her dead. Two men from the village arrived and were immediately questioned. One of the men answered, denying any connection with the ONLF; two soldiers tied his hands together, threw a rope around his neck and pulled on each end until he choked to death.

Maryama was ordered to hold the strangled man upright and not allow him to fall to the side. When, exhausted after two hours, she let go of the body she was “arrested with six other girls, including my sister – one of the girls had given birth that day”. On the first night in captivity in an abandoned village

she was forced to her feet by two soldiers, one of them kicked her in the stomach – she fell on the floor, keeled over and died on the spot. They also shot my sister in front of us. I watched as she bled to death next to the other girl who had died from the beating.

Maryama told how after witnessing these atrocities. Soldiers put a plastic bag over her head and tied a rope around her throat until she lost consciousness. When she came to, she found herself outside in a deep pit; she was naked and in great pain; she found it difficult to move. Her son was nowhere to be seen. Eight other people were with her, five were dead – one was a cousin, two were neighbours. These people had gone missing 10 days previously; it was assumed they were in prison. She cried hysterically.

Maryama, along with other female prisoners, was routinely tortured by military personnel; stripped naked, they were forced to crawl on their hands and knees across a ground of sharp stones.

After 28 days in the pit, her son was brought to her and they were both taken to prison. She was held captive in Jail Ogaden, in the regional capital Jigjiga, for approximately two and a half years, during which time she was subjected to torture and extreme sexual abuse. There were, she told me, over 1,000 women in the prison. At this point it is perhaps worth stating the obvious: this woman had broken no law, had not been charged with any offence or been granted any of her constitutional or human rights.

Maryama, along with other female prisoners, was routinely tortured by military personnel; stripped naked, they were forced to crawl on their hands and knees across a ground of sharp stones. Their knees would collapse and bleed; if they stopped, they were verbally insulted and beaten with wooden sticks or the butt of a rifle. Another favoured method of torture was to strip the women and take them to the latrines where toilet waste was thrown over them. At the same time they were beaten with sticks, belts and hit with the butt of a rifle. They were not allowed to wash and were forced to sleep covered in this waste.

Maryama, who was around 18 years of age when she was first arrested, was repeatedly raped by groups of soldiers while in prison. They like the women to be young – 15 to 20 – and semi-conscious when raped so the girls cannot resist and the perpetrator cannot be identified; part strangulation with a rope or a blow to the head using the butt of a rifle renders the innocent victim unconscious. Defected military men told me that soldiers are told to use the penis as a weapon and are “trained” to rape women and on how to “break a virgin”; violent demonstrations on teenage girls are given by training officers. They are told to eat hot chillies before going out on patrol, so their semen will burn the women rape victims. A defected divisional commander in the government-sponsored Liyu Police, Dahir, related how during his five years in the force he had witnessed between 1,200 and 1,500 rapes in the Ogaden.

The creation of a climate of fear among the population is the aim of the government and the military; they employ a carefully planned, if crude, methodology to achieve their vile objective. False arrest and detention of men and women, arbitrary assassinations and torture, rape and the destruction of property and livestock make up the arsenal of control and intimidation employed by the EPRDF government.

The Ethiopian regime maintains that nothing untoward is taking place within the Ogaden region. The military and Liyu Police, they tell us, are safeguarding civilians against the terrorist organisation operating there, namely the ONLF. Soldiers in training are brainwashed to see the population of the region – men, women and children – as enemies of the state. Accounts like Maryama’s are pure fiction, government spokesmen say, and, sorry chaps, the region is unsafe for members of the international media or human rights groups and you cannot enter. And if you do, you will be arrested.

There is indeed terrorism raging throughout large parts of the Ogaden and elsewhere in the country. It is state terrorism perpetrated by a brutal regime that is guilty of widespread criminality, much of which constitutes crimes against humanity.