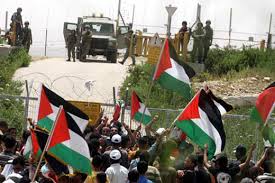 Supreme Court ruled long ago that settlements may not be built on confiscated private Palestinian land, but move hinges on fact that it was Jordan, not IsraHell, who confiscated the land.

Israel is pushing ahead with a plan that would legitimize construction on land near the settlement of Ofra in the West Bank.

The Supreme Court ruled as early as 1979 that settlements may not be built on confiscated private Palestinian land. The move’s legal foundation appears to hinge on the fact that it was the Jordanians, not the Israelis, who confiscated the land – before Israel took over the West Bank during the Six-Day War in 1967.

Jordan had confiscated land from the villages of Ein Yabrud and Silwad to build a military camp. When the settlement project began after 1967, the first settlers used the military buildings as sleeping quarters for a camp they established there. By 1975, the camp had become Ofra, the first Jewish settlement in the northern West Bank, now home to more than 700 families.

The land in the current plan contains a cluster of dilapidated buildings. In the past two years, amid a housing shortage, the settlers of Ofra began preparing the land for a new neighborhood. The land now lies within Ofra’s fence; in effect, the plan would expand the settlement.

The move is being advanced without permits, and in the last few months Israel’s Civil Administration in the West Bank has issued demolition orders for structures in the compound. It said the work should stop, but this order was ignored.

According to data from the Civil Administration’s inspection unit, construction has begun on six permanent buildings containing a dozen housing units. The inspection unit says 20 prefab homes have been placed at the site, and the land is being prepared for more construction. Work has also begun on a central public building.

Two months ago, the original Palestinian owners petitioned the High Court of Justice to demolish the buildings and give them back the land. Until 1979, construction of settlements on Palestinian land seized for “military needs” was the norm. The Supreme Court ruled this practice illegal in 1979, and the state stopped confiscating private Palestinian land for settlements. But settlements have since been built on private land expropriated before 1979.

Responding to the recent petition, the state said it has no intention to carry out the Civil Administration’s demolition orders, and that it plans to prepare the site for construction.

The affidavit, submitted by an adviser to Defense Minister Ehud Barak, Eitan Broshi, noted that the decision to legalize the construction was made after it was found that the land had been expropriated by the Jordanians.

The move is legally complex: While the land was originally confiscated by the Jordanians, Israel has since reaffirmed the Jordanians’ confiscation order and stated that the land would be used for public needs such as infrastructure. This also contradicts the use intended for the land in the new plan.