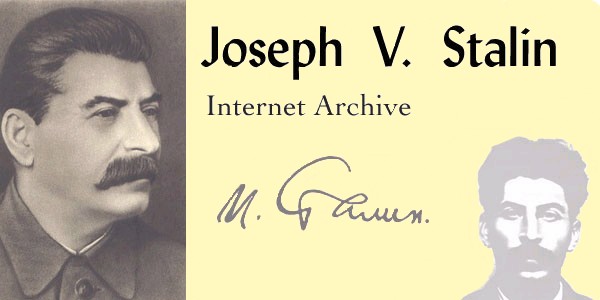 Source: Fils du Peuple, Editions Sociales, Paris, 1970;
Translated: for marxists.org by Mitchell Abidor;
CopyLeft: Creative Commons (Attribute & ShareAlike) marxists.org 2004.
In 1950 Thorez suffered a stroke. He went to the Soviet Union to recover, and was there until April 1953, a month after Stalin’s death.

At Barvikhs, and then during my stay on the banks of the Black Sea, I several times received the unexpected visit of Stalin, with whom I conversed in Russian.
Stalin worried about the care I was receiving, about my food. One day he said to me: “the cook prepares French meals for you: grilled meats? many vegetables? This is good. You should also drink a little wine” (the doctors had forbidden this). And he told me that during his adventurous life as a revolutionary he had once been cared for in a hospital in Viatka — today Kirov — where, to comfort him, he’d been made to drink French wine. “It was very good,” he stressed. Stalin had oranges and lemons brought to me. He himself chose the regions and cities where I was to stay.
At the beginning of 1952, feeling better, I wanted to return to France in order to more closely participate in the work of the Party. Stalin came to see me in Gagra. “Nou, vy sobiraietess ouiezjat“…”So, you’re getting ready to leave? But you aren’t yet fully recovered. You have to be patient; this is an important quality in a revolutionary. France isn’t going to vanish. You will see it again, and you’ll have every possibility of serving it.”
One evening, finding myself beside the Black Sea, I had a telephone conversation with Stalin: “Did you know,” he said, laughing, “ that the enemies of the working class in France claim that I am keeping you by force in the Soviet Union? They are putting up posters calling for your ‘liberation’ and return to France! They’ll doubtless be less happy when they see you arrive…”
It was in October 1952 that I heard Stalin speak for the last time from a tribune. The Communist Party of the Soviet Union was holding its 19th Congress. Stalin exhorted the Communists to take up the flag of democratic freedoms and national independence that the decadent bourgeoisie had thrown overboard.
Speaking for the first time since my illness, I had the joy of saluting the guides of the Soviet proletariat.
The political situation in France continued to preoccupy me. The Pinay government had intensified the war in Vietnam and signed the treaties of Bonn and Paris. It had fallen in December 1952, but its successors tried to have recourse to décrets-lois, and sought to modify the constitution, in order to pursue a policy based on the Marshall Plan and the Atlantic Treaty. In my correspondence with France, I insisted on the problem of workers’ unity.
On March 5, 1953, struck down by a stroke, Stalin died. I shared the deep affliction felt by the Soviet people and Communists of the entire world.
Stalin had been an eminent Marxist theoretician, a great organizer, a firm fighter for communism. For more than thirty years he had occupied the post of Secretary General of the Central Committee of his party.
After Lenin’s death he supported the intransigent struggle against all the enemies of Marxism: Trotskyists, right opportunists, bourgeois nationalists. His book “Questions of Leninism” played a great role in the formation of Communists in all countries. It was under his direction that the people of the USSR constructed socialism and carried off their victory in the Second World War.
Nevertheless, Stalin committed grave errors, especially in the last period of his life. Success and praise turned his head. An appreciation of his two sides — the positive and the negative — was given in the documents of the 20th Congress of the CPSU and in the June 1956 resolution of the Central Committee of that party: “On the means of overcoming the cult of the personality and its results.”
Stalin committed the error of putting in the forefront the thesis of the worsening of the class struggle in 1937, at a moment when the exploiting classes had been eliminated in the USSR, and when there were only two friendly classes: the workers and the peasants. He transformed into a rule of the life of the state and the Party certain limitations to democracy that had been inevitable during the period of ferocious struggle against the class enemy and its agents, and then during the war against the fascist invaders. He committed errors in the appreciation of the strategic situation on the eve of the unleashing of military operations.
His errors caused grave prejudice to the Soviet people and the workers movement. Nevertheless, it should be noted that the personality cult didn’t turn the Communist Party of the USSR from its Leninist orientation, that it didn’t and couldn’t change the nature of the Soviet state. We can see this by the way the Communist Party of the USSR corrected the errors and defects of the preceding period, and by the élan that the work of the 20th and 21st gave to the work of communist construction and the fight for peace.