Home » Post Page » Sharing – the alternative to inequality and collapse 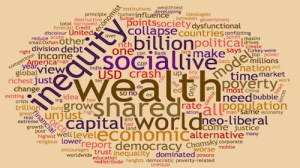 By Graham Peebles
Depending on who you listen to and how it is defined, worldwide income and wealth inequality is either more acute than it has ever been, or the gap between the rich and the rest is narrowing.
The numbers may be distorted by conflicting statistics but what is indisputable is the shadow of extreme poverty that billions are living under, the economic induced anxiety millions more face every day, and the fact that the rich continue to get richer.
Of the 7.2 billion people in the world, around half are living on less than USD 2.00 a day – that’s the official barrier to the land of poverty set by the World Bank. Most of these people are to be found in the slums or villages of India, China, and the shantytowns and rural settlements of sub-Saharan Africa, where 48 per cent of the population live on less than USD 1.25 a day, according to the World Bank.
In the “land of the free”, where anyone can supposedly become a zillionaire, income and wealth inequality is the most acute of any industrialized nation and the highest it’s been since 1928.

The Washington Post reports Credit Suisse’s findings that “the lower half of the global population possesses barely 1 per cent of global wealth while the richest 10 per cent of adults own 86 per cent of all wealth, and the top 1 per cent account for 46 per cent of the total.”
In the “land of the free”, where anyone can supposedly become a zillionaire, income and wealth inequality is the most acute of any industrialized nation and the highest it’s been since 1928. The median wage for a working man in the US today, according to Nobel Prize-winning economist Joseph Steiglitz “is below its level in 1989”. But not to worry, the top 1 per cent in America are doing just fine: Oxfam found that “the wealthiest 1 per cent captured 95 per cent of post-financial crisis [2009 onwards] growth, while the bottom 90 per cent became poorer”. To be born poor in the US is to remain poor: upward mobility remains virtually non-existent and “the American dream” little more than a frothy Hollywood fantasy.
The Organization for Economic Cooperation and Development (OECD) makes clear its view in a comprehensive report pointing to the stark differences existing in income within OECD countries. “It reaches 10 to 1 in Italy, Japan, Korea and the United Kingdom,” leaps to “around 14 to 1 in Israel, Turkey and the United States, and “27 to 1 in Mexico and Chile.” It also lists the US as having the highest poverty rate of all OECD countries (aside from Turkey), and slumbering near the bottom in terms of social justice.
Income imbalance is only part of the divisive and socially unjust problem of inequality.

To be born poor in the US is to remain poor: upward mobility remains virtually non-existent and “the American dream” little more than a frothy Hollywood fantasy.

Wealth inequality is the other half of the puzzle, and it’s constantly growing, as French economist Thomas Piketty makes clear in his new book, Capital and the 21st Century. “In societies where the rate of return on capital outstrips economic growth, wealth inequality ineluctably rises. Once constituted, capital reproduces itself faster than economic output increases.”  Accelerating the social chasm that is wealth inequality, making it more difficult month on month, year on year to close the wealth gap and reduce the inequity. “In Europe the wealthiest 10 per cent own 60 per cent of wealth, in the US its 70 per cent.” Piketty warns that if wealth inequality is allowed to grow, the consequences are “potentially terrifying”.

Inequality has far-reaching social effects and erodes democracy. Grossly unequal societies have greater levels of alcohol and drug addiction, more crime, lower mortality rates, higher child pregnancies and lower literacy levels than less unequal countries.
Political influence and control are added bonuses for the rich; as for the rest, well, they get to vote but have little or no influence over government policy and overwhelmingly distrust politicians. With dire poverty, as experienced by the 3.5 billion living somehow, goes lack of education, vulnerability and exploitation, all of which discolour democracy.
Inequality is the plague of our times, a divisive epidemic caused by the unjust economic system based on neo-liberalism, or market fundamentalism, which saturates the world. It is a system which, Noam Chomsky says, is “so dysfunctional that it cannot put eager hands to needed work”, as would happen “if the economy were designed to serve human need rather than create wealth beyond avarice for the privileged few”. This dysfunctional and socially unjust system has facilitated “very high concentrations of wealth, and with it political power, which yields [favourably skewed] legislation, which drives the cycle forward”.
Based as it is on competition, this dysfunctional model breeds insecurity and stress, encourages separation and division, leading to social tension and a lack of trust. A recent survey found that in America – where inequality is “off the scale” – only 15 per cent admitted trusting their neighbours, whereas in more equitable societies the number is closer to 60 per cent. It encourages short-termism and promotes the idea that everyone and everything is a commodity to be bought and sold at a profit. It has condemned billions to lives of stifling poverty, concentrated extreme wealth and power, and poisoned the planet – perhaps irredeemably.
The driving doctrine of neo-liberalism is selfishness, well-expressed, Chomsky relates, “by Adam Smith (1723-90) in what he called “the vile maxim of the masters of the mankind – all for ourselves and nothing for other people”. It is a maxim religiously adhered to by the corporate proponents of the system and their political allies.
According to a small army of leading economists (many of whom forecast the 2008 crash), it is a system on the brink of collapse – again. And this time, they say, it will be worse than  in 2008.

The neo-liberal model is an unjust system that belongs in the past; it serves not the majority of people, the 99.9 per cent who have had enough of social injustice, government duplicity and inequity…

Peter Schiff, the best-selling author and chief executive of Euro Pacific Capital, says “the crisis is imminent… we’re [the US] broke… we owe trillions [US public debt is around 17.5 trillion to date]. Look at our budget deficit; look at the debt to GDP ratio, the unfunded liabilities. If we were in the Eurozone, they would kick us out.” Schiff predicted the 2007 meltdown and believes that the 2008 stock market collapse “wasn’t the real crash. The real crash is coming… And it will be worse than the Great Recession.”
It is a view shared by others, including Robert Wiedemer, best-selling author of The Aftershock Investor, who points out that the so-called recovery is “100 per-cent fake”. He explains that the GDP of America in 2013 “grew 2 per cent or USD 350 billion, but we borrowed over USD 700 billion. That tells you right there that we are borrowing more than we are even growing.” He goes on to predict “the big one [collapse] is coming… we’re just pumping up the bubbles, and all that’s going to do is make them a lot worse when they pop.”
Marc Faber, financial adviser and fund manager, expresses the same view, saying, “we are in a gigantic financial asset bubble”, which “could burst any day,” as does renowned pundit Warren Buffet, who is “pointing to an imminent and devastating crash”. Given unprecedented levels of debt and youth unemployment, together with growing inequality and a flock of financial bubbles from bonds to housing – from Britain, where it is burgeoning and ready to burst, to Australia and the US, via China and various points in between. This includes some developing countries that have been persuaded to adopt the same model because, according to the high priests of corporate capitalism, there is no alternative. Well, for the millions and billions living without, we had better find one and soon.
The collapse of this violent and unjust monster seems inevitable, whether it arrives in 2014, 2015 or a few years later.
There is, of course, a body of less pessimistic views. These come mainly from those in charge of Western economies – treasury men and national bankers wedded to the comforting model of the familiar. Their political careers uppermost in their ambitious and dishonest minds, they cling to a dying paradigm and cannot see a more socially just, unifying alternative. Notwithstanding their remonstrations, the urgent need for a new economic system, based on equality and fairness, is clear. The neo-liberal model is an unjust system that belongs in the past; it serves not the majority of people, the 99.9 per cent who have had enough of social injustice, government duplicity and inequity, and have taken to the streets in huge numbers in cities across the world to make known their collective view.

We are living in times of great change as we move from one model of civilization, built in a time when conflicting “isms” dominated man’s thinking, and religious, political and social ideologies fought for dominance. New ideas, based on perennial principles of freedom, social justice and unity are increasingly influencing our thinking. Qualities like cooperation, tolerance and synthesis are at the heart of the new way. Such ideas run contrary to the existing socio-economic ideologies (with their focus on the individual, competition and nationalism), and are anathema to the reactionary, mainly conservative (large and small “c”) neo-liberal disciples, who resist change as they seek to maintain the status quo that rewards them so very well.

Our civilisation is so dominated by market fundamentalist madness that, in a world of plenty, we allow 20,000 children to die every day of starvation- and poverty-related illnesses, and millions more to live unfulfilled, stunted lives…

The forecast economic crash is not an isolated collapse; it is a symptom of a broader movement of change and the dissolution of inadequate structures. The old must give way in order to accommodate new truly democratic ways of organizing society.
As Thomas Piketty says, “If democracy is some day to regain control of capitalism, it must start by recognizing that the concrete institutions in which democracy and capitalism are embodied need to be reinvented again and again.”
Our civilisation is so dominated by market fundamentalist madness that, in a world of plenty, we allow 20,000 children to die every day of starvation- and poverty-related illnesses, and millions more to live unfulfilled, stunted lives without access to education, health care and basic sanitation and shelter. This, and a plethora of other poverty-related issues, must all come to an end: forced labour, debt bondage, trafficking of persons (primarily women and girls for prostitution and associated poisons), the displacement of indigenous people, the destruction of the environment, and the denial of people’s basic human rights.
Piketty asserts that “we need to rebuild the democratic institutions that can redistribute income and wealth”. Redistribution, or sharing, of resources, skills and knowledge is the common sense option to the destructive neo-liberal model. Putting the principle of sharing at the heart of the economic system is a sane alternative that is increasingly gaining ground.
A plethora of sharing initiatives have been set up, many of them local, from sharing unwanted items through various recycling websites, to car and bicycle sharing schemes. Systems of information sharing are growing, whether smallholder farmers in India spreading their wisdom and sharing their experiences through a mobile phone app, or the mighty United Nations. Above all sharing unites people, building relationships and creating the possibility for trust to flower, something inequality has destroyed.
Not only would sharing be a huge step towards alleviating worldwide poverty and reducing inequality, it would also help in the creation of social justice – an essential pre-requisite in establishing peace.