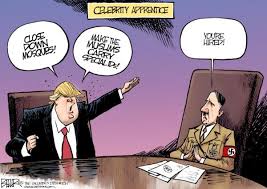 On today’s BradCast, the Presidential Primary battle between Hillary Clinton and Bernie Sanders becomes a fight over the official party platform and whether progressive reform can actually happen from within; Donald Trump wants the US to torture again; and California goes to pot.

In the wake of this week’s horrific terror attack at Turkey’s Ataturk Airport in Istanbul, the presumptive GOP nominee Donald Trump wants to “Make America Commit War Crimes Again” as he calls for the US to once again implement torture policies such as waterboarding. In the meantime, new Pew polling shows Trump’s support from nation’s outside of the US is dismal, often in single digits. While back here at home, according to new Quinnipiac poll out today, he remains “neck-and-neck” nationally with presumptive Democratic nominee Hillary Clinton whose favorability ratings are also dismal, though not as bad as Trump’s.

But as Bernie Sanders supporters quickly move toward Clinton, representatives for the two popular Democratic rivals hash out the party’s official platform document to be adopted by delegates at the Democratic National Convention in July.

Salon political reporter Ben Norton joins us to discuss progress of the talks, specifically the Clinton camp’s refusal to allow a demand for a $15/hour federal minimum wage mandate in the non-binding party manifesto, as well as the failure by Clinton surrogates to agree to more progressive language on a number of issues, from Israel to fracking to trade policies.

Norton goes on to report that the fight between surrogates for the two candidates at the DNC Drafting Committee’s platform talks echoes the long Democratic primary race, suggesting, as he sees it, that the party, ultimately, may not be able to reform from within. “You have the Sanders’ appointees pushing for more progressive measures, and the Clinton appointees opposing those measures. I think in some ways, we did see some progress, but overall I think there’s reason to be pessimistic for a potential Clinton presidency, given the way that this has represented itself at the DNC committee drafting,” Norton explains. “It really reflects the war going on within the Progressive community.”

Real progressive policy change, he argues, will require new candidates to step up at the local and state level — even as independents or under the banner of a third party, if necessary — to take up the fight and seek office, he notes, just as Sanders did when he initially ran for office in Vermont decades ago.

Finally today, more calls for ‘Texit’! California announces that an initiative to allow the recreational use of marijuana will be on the statewide ballot this November, and Colorado finds that teen use of pot has actually fallen below the national average since the state adopted a similar policy in 2014.