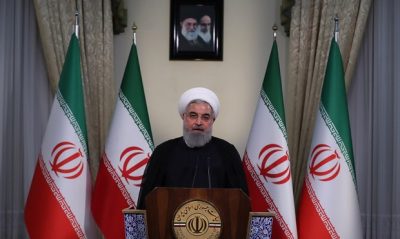 Take off the “feel good” Alt-Media glasses and face the facts, sanctions are very successful in inflicting Hybrid War harm against victimized states, which is an “inconvenient reality” that Iran’s being reminded of right now.
Contrary to the “politically correct” Alt-Media dogma that sanctions “only make states stronger”, some of them are inevitably destabilized by this asymmetrical weapon whenever it takes on Hybrid War dimensions, as it currently is in Iran.
The Islamic Republic is being besieged from within due to the external encouragement of the time-tested tool of speculation as a means for influencing the country’s financial and currency markets, with the result being that economically driven protests are spreading throughout the country’s capital and into other cities as well. These aren’t the first such mass demonstrations this year because Iran earlier had to deal with large-scale protests over similar issues roughly six months ago, which were also sparked by civil society’s discontent and ended up being guided  by largely unseen foreign hands in the direction of destabilization, too.
The Spurious Kurdish Connection
The same phenomenon is repeating itself once again, albeit possibly with the intent of transforming the previous “test run” into the “real thing”, or in other words, seeing foreign state actors (mostly the US & Saudi Arabia) providing clandestine military support to urban and rural terrorist/”insurgent” forces in order to provoke a self-sustaining cycle of escalation that could be manipulated for geopolitical ends. Last winter’s unrest could in hindsight be seen as a probe for gauging the government’s response and testing the limits of what could “acceptably” be done before eliciting a reaction from the security forces. Armed with this contextual Color Revolution knowledge, they then proceeded to experiment with their modified techniques in Iranian Kurdistan, which has a militant history of preexisting identity discord and is therefore the most susceptible part of the country to Hybrid War.
The authorities cracked down on smuggling in this region in early spring, but this had the effect of prompting protests by the impoverished locals who complained that they couldn’t receive much-needed supplies at the prices that they had previously depended on. Moreover, the Kurdish population was already predisposed to more political assertiveness following the nationalist demonstration effect that they observed in neighboring Iraqi Kurdistan last fall after the region’s unsuccessful independence attempt. The cocktail of nationalist and economic concerns created fertile ground for demagogues to argue that the entire population should take to the street in order to resist the government’s anti-smuggling crackdown. Although disconnected from the current events in Tehran, the Mainstream Media narrative will predictably be that this new round of protests originated in Iranian Kurdistan and have since spread nationwide.
The “Zero Tolerance” Chain Reaction
The present events are driven more by speculation (whether unfounded or not) than anything else because many people are worried that Trump’s unilateral withdrawal from the 2015 nuclear deal, the reimposition of sanctions, and subsequent November deadline for the world to stop purchasing Iranian oil will totally wreck their economy and lead to a sharp decrease in living standards. After all, the US’ “zero tolerance” policy of refusing to issue any “secondary sanctions” waivers to China and India – Iran’s two largest energy partners – might lead to them curtailing their oil imports in order to avert a more pronounced trade war with America. Should this happen, then the US would succeed in Asia against Iran where it failed in Europe against Russia by significantly dipping into its opponent’s market share and therefore depriving it of much-needed cash revenue.
Making matters even more pronounced is that many Iranians, and particularly those in the urban areas such as Tehran, genuinely believed in the false hopes that the “reformist”-led Rouhani government encouraged in their hearts after the 2015 deal that convinced them that their personal futures would be brighter than ever before. Whether this was a deception all along or just a terrible and mismanaged policy to begin with, the fact of the matter is that many people feel deeply disappointed by what happened and might be less willing to passively accept a worsening of their living conditions no matter how much the government says that Trump is solely responsible for this. The knock-off effect of this speculation is that the value of the Iranian rial has plunged and everything is now naturally more expensive for everybody. 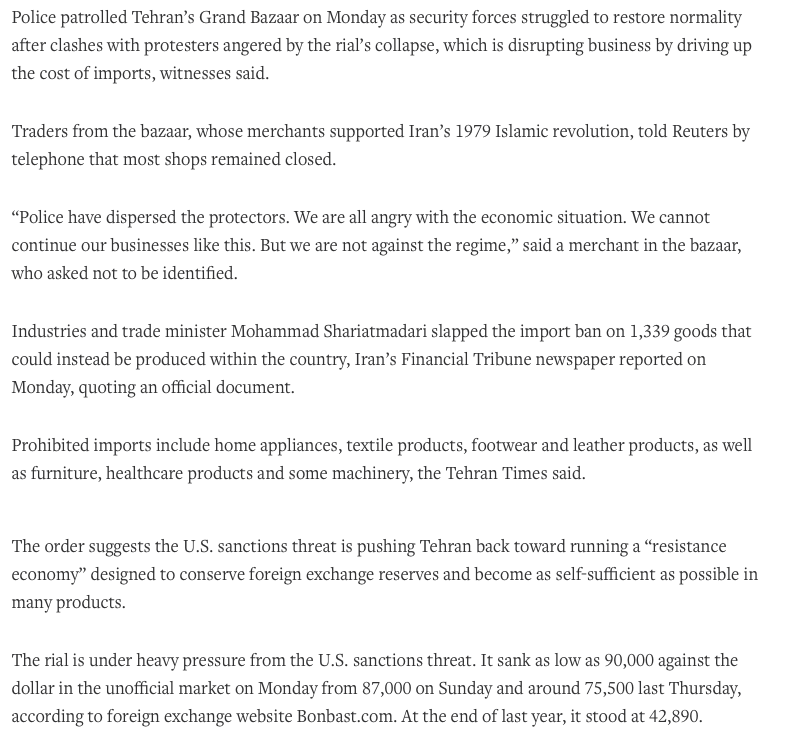 Breaking: Iranian Media: “Trump Is on Course to Break Us”

Can you help us keep up the work we do? Namely, bring you the important news overlooked or censored by the mainstream media and fight the corporate and government propaganda, the purpose of which is, more than ever, to “fabricate consent” and advocate war for profit.
We thank all the readers who have contributed to our work by making donations or becoming members.
If you have the means to make a small or substantial donation to contribute to our fight for truth, peace and justice around the world, your gesture would be much appreciated.