Home » Post Page » Russia, U.S. “Losing Patience” With One Another Over Syria 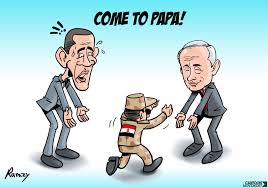 As the recent standoff between Russian and American jet fighters over Syria still simmers in the headlines, both sides are claiming a loss of patience with the other regarding the support and opposition for Western-backed terrorist forces and the government of Bashar al-Assad.

Not even a week before the standoff, the United States via war criminal and Skull and Bones member John Kerry warned the Russians, Iranians, and the Syrians that U.S. patience is “not infinite.” Notably, Kerry’s comments were more heavily directed at Russia than any other power.

“Russia needs to understand that our patience is not infinite. In fact it is very limited with whether or not [Bashar] al-Assad is going to be held accountable,” Kerry said.

But while the United States claims that its patience is “not infinite,” an interesting point to make since the entire crisis in Syria was the handiwork of the U.S. (perhaps Kerry means “patience with obstructing the U.S. plans for the destruction of Syria?”), Russia is now warning the U.S. that it too is running out of patience.

“It is us, not Americans who are losing patience concerning the situation in Syria. We are fully meeting our commitments and agreements on securing the ceasefire and national reconciliation in Syria,” Head of the Russian General Staff Valery Gerasimov told reporters on Monday.

Gerasimov claims that Russia has been sending coordinates of Russian bombing targets but said that the United States has yet to determine which groups are “moderate” terrorists (aka Syrian “opposition”) and which are extremist terrorists.

“As a result, terrorists are actively restoring their strength and the situation is escalating again,” he said.

In the aftermath of the recent aerial standoff between two nuclear world powers, the rhetoric suggesting patience coming to an end is concerning to say the least. This is particularly the case when one of the parties to hostilities is the initiator of the aggression and the crisis to begin with and one that shows no signs of willingness to back away from its tragic and foolish foreign adventure.

It is time that the United States and NATO cease their obsession with the destruction of Syria not only on moral grounds but also out of self-preservation. If they do not, then it may well be the American people and the rest of the world that suffers the consequences.