On Friday, the Russian General Staff announced it will send warships from the Black Sea Fleet to the Syrian coast. The deployment will protect the Russian logistics base in Tartus, Syria.

Russia has historically maintained a strong bilateral relationship with Syria. Its only Mediterranean naval base for the Black Sea Fleet is located in the port of Tartus. 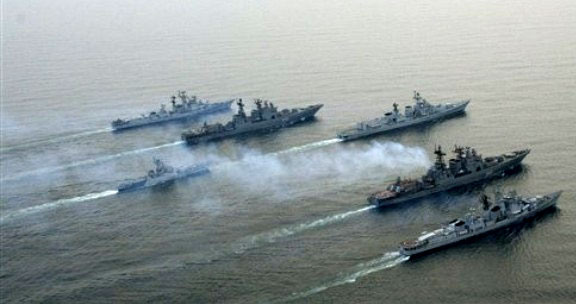 “Several warships of the Russian Black Sea Fleet, including large landing ships with marines aboard, are fully prepared to go on the voyage,” the General Staff told Itar-Tass.

In late May, Russian and Western media reported that the Russian-flagged bulk cargo vessel Professor Katsman docked at the Syrian port of Tartus and delivered weapons to the al-Assad regime. The Ford Foundation funded NGO Human Rights First also made the claim. Amnesty International, a Soros funded NGO, has called on the Russian government to cease the transfer of arms to Syria in compliance with UN Security Council recommendations.

“Either the U.S. intelligence service works poorly or they have a poor knowledge of geography,” a source with the Russian General Staff remarked in response to the allegation.

On Sunday, The Telegraph reported that theUnited States has enlisted the help British officials to stop an alleged shipment of MI25 helicopters from the Russian Baltic port of Kaliningrad. The MV Alaed, a Russian-operated cargo vessel, is said to be sailing across the North Sea en route to Syria. The U.S. wants the ship’s insurance cover removed under the terms of aEuropean Union arms embargo against Syria. Removing the MV Alaed’s insurance would make it difficult for the cargo ship to dock in port.

In April, a German cargo ship was prevented from docking at Tartus. The ship allegedly carried a cargo of munitions sent by Iran to the al-Assad regime.

“The new Russian weapons supplies add to Syria’s massive arsenal of hundreds of Soviet-built combat jets, attack helicopters and missiles and thousands of tanks, other armored vehicles and artillery systems,” the APreported after Clinton’s accusation that Russia had sent attack helicopters to Syria. “Russia said it also has military advisers in Syria training the Syrians to use the Russian weapons, and has helped repair and maintain Syrian weapons. Some experts alleged that the helicopters Clinton said were en route to Syria could be old ones that underwent maintenance in Russia.”

Russian Foreign Minister Sergei Lavrov has denied the accusation. In a statement on June 15, he said that “many years ago” Russia sold helicopters to Syria, but is now only repairing the helicopters.

Former Clinton bureaucrat and United Nations ambassador Bill Richardson used the accusation to call for arming Syrian rebels “in an effort to protect civilians against government forces loyal to President Bashar al-Assad,” according to Fox News.

The Free Syrian Army now active inside Syria is supported by the CIA, MI6 and Mossad. The rebel group held talks with the NSC last week in an effort to acquire heavy weapons, including surface-to-air missiles. According to witnesses and other evidence, the FSA is responsible for the massacre in al-Houla, Syria, not the al-Assad regime as was widely reported by the media in the United States and Europe.

Russia’s chief arms exporter said Friday, June 15, that his company was shipping advanced defensive missile systems to Syria that could be used to shoot down airplanes or sink ships if the United States or other Western nations try to intervene to halt the country’s spiral of violence.

“I would like to say these mechanisms are really a good means of defense, a reliable defense against attacks from the air or sea,” Anatoly Isaykin, the general director of company, Rosoboronexport, said Friday. “This is not a threat, but whoever is planning an attack should think about this.”

As the weapons systems are not considered cutting edge, Isaykin’s disclosures carried greater symbolic import than military significance. They contributed to a cold war chill that has been settling over relations between Washington and Moscow ahead a meeting between President Barack Obama and President Vladimir Putin, their first, on the sidelines of the Group of 20 summit meeting in the Mexican resort of Los Cabos next week.

His remarks come just days after Secretary of State Hillary Rodham Clinton raised diplomatic pressure on Russia, Syria’s patron, by criticizing the Kremlin for sending attack helicopters to Damascus, and amid reports that Moscow was sending an amphibious landing vessel and a small company of marines to the Syrian port of Tartus, to provide security for military installations and infrastructure.

Alexander Golts, an independent military analyst in Moscow, said the Russians’ discussion of weapons shipments “undoubtedly” serves as a warning to Western countries contemplating an intervention.

“Russia uses these statements as a form of deterrence in Syria,” he said. “They show other countries that they are more likely to suffer losses.”

Throughout the Syrian crisis, Russia has insisted that all its arms sales to the isolated government of Bashar Assad have been defensive in nature and were not being used in the Syrian leader’s vicious campaign to suppress the opposition.

Isaykin underlined the point, but in a way that could also be interpreted as a warning to the West against undertaking the military action of the sort that ousted Moammar Gadhafi from power in Libya, something that Putin viewed as a breach of sovereignty that he does not want repeated.

Yet, as news reports of government massacres emerge almost daily from Syria, the prospect of the United States or NATO acting unilaterally has become a more frequently discussed option, particularly given Russia’s adamant refusal to authorize more aggressive U.N. action.

Isaykin, a powerful figure in Russia’s military industry, openly discussed the weapons being shipped to Syria: the Pantsyr-S1, a radar-guided missile and artillery system capable of hitting warplanes at altitudes well above those typically flown during bombing sorties, and up to 12 miles away; Buk-M2 anti-aircraft missiles, capable of striking airplanes at even higher altitudes, up to 82,000 feet, and at longer ranges; and land-based Bastion anti-ship missiles that can fire at targets 180 miles from the coast.

Military analysts immediately questioned the effectiveness of the air defenses Russia has made available to the Middle East, including Syria, none of which have offered even token resistance to Western forces.

Ruslan Aliyev, an authority on military affairs at the Center for the Analysis of Strategies and Technologies in Moscow, said that statements by Isaykin and others were issued principally for political effect. Moscow has declined to supply Syria with its most lethal air defense, the S-300 long-range missile system.