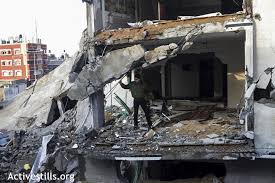 Following arrests of 19 people in Bir Hadaj after clashes and protests in the village last week, all 7 minors have been released, 4 adults have also been released, and 8 others are being held until sentencing following police charges. 4 adults were released due to lack of evidence, although police filed charges against all 12 adults. Police accused the detainees of assaulting police officers, obstructing the work of the police, damaging police vehicles, and evading arrest.
The Magistrates’ Court in Bir el-Sabe (Beersheva) agreed to extend the detention of the 8 remaining protestors from Bir Hadaj on Thursday, 15 November 2012. The protestors were arrested at protests in Bir Hadaj on 12 November 2012 following attempts by the Interior Ministry to post demolition orders on homes in the village and the village’s mosque. Those still being held are awaiting the court’s decision on the indictments filed against them, along with decisions on the 4 other adults who were arrested and them released. The court is due to issue its decisions this week.
The court ordered the release of all 7 minors on the 13th, one without condition, two because they had been held in jail without receiving obviously necessary medical care, and the remaining four to house arrest outside the village with permission to travel to work or school until the following Thursday. court also ordered the release of 4 of the adult detainees. Adalah Attorneys Orna Kohn, Jalal Dakwar, and Nadeem Shehadeh, together with Attorney Sabor Abu Jammia’ of Al Mezan Center for Human Rights, and Attorneys Salem Abu Medeghemand Shahadi Ibn Bari, among others, are representing the detainees before the court.
Police called all of the minors back to the police for investigations on Wednesday. The police forbid their parents from entering the police station with them, in grave violation of the law governing investigation of minors. During the follow-up investigation, an officer struck one of the minors, requiring him to go to the hospital.
A large police force entered the recognized village of Bir Hadaj at dawn last Monday, 12 November 2012, to post demolition orders on the village homes. The police used all pretext to arrest those protesting the demolitions, and fired a large number of tear gas canisters in and around the village elementary school. Dozens of parents and children suffered from tear gas inhalation and went to the hospital. Police also fired rubber bullets and injured several, including a pregnant woman who was struck in the stomach and a man who was struck in the eye. Undercover officers stole villagers’ cars to enter the village and conduct further arrests later in the morning.
Dr. Thabet Abu Ras, the Director of Adalah’s Naqab office, said that the day’s events were an instance of brutal and illegal police violence against the village. He demanded that the police officials and officers who were responsible be investigated and criminally indicted.
The Interior Ministry is trying to posting demolition orders in Bir Hadaj, a recognized village, because of attempts to impose changes to its original plan. Bir Hadaj was recognized in 2003 and the master plan approved in 2005 as an agricultural village, with up to 5 dunams of land allotted for every 2 housing units. However, since 2005 the Israel Lands Administration has not allocated or approved any such plots for the village. Following the approval of the Prawer Plan, the government plans to forcibly impose a denser, non-agricultural plan on the village, and is therefore trying to intimidate the population and later impose new zoning regulations.